Netflix's "A Series of Unfortunate Events" an Unfunny Parody of Sadness

It's not supposed to happen like this. A strange children's book that gets adapted into one box-office shrug of a movie during the peak of its popularity ("Lemony Snicket's A Series of Unfortunate Events" in 2004) does not get an even larger treatment almost a decade later, with even bigger servings at 50-minute episodes. And yet here is the eight-episode series "A Series of Unfortunate Events," which boasts a screenplay now written by the original author (Daniel Handler, known as Lemony Snicket) and a desire to tell the stories that never made it to film form. Coming to Netflix on January 13, it’s a storyline that continues to defy expectations in how dark a series for grown-up children can be, and it’s still just as polarizing.

I spent a lot of time watching “A Series of Unfortunate Events” trying to cozy into its tone, which I suspect won’t be a problem for those already familiar with the material, or those who just want to see a particularly grim fairy tale. One of the biggest "Snicket"-heads out there is clearly Barry Sonnenfeld, who executive produced the original 2004 film starring Jim Carrey and Meryl Streep, and has now decided to take things into his own hands. He directs four new episodes of this series, including the pilot, which puts anyone who read the first book or saw the original film into a familiar place: the story of the three Baudelaire children, oldest sister Violet (Malina Weissman), her brother Klaus (Louis Hynes) and their baby sibling Sunny, who are orphaned by a freak tragedy that burns down their parents’ mansion with Mother and Father inside. The parents’ will makes them stay with the closest relative, which is the snidely, cruel wannabe actor Count Olaf (Neil Patrick Harris), who just wants the inheritance the children will be owed when Violet turns 18. As their new guardian, he treats them horribly, and, with his theatre troupe friends, devises ways to get the money, or at least make the Baudelaire’s lives a living hell. The children find some solace in Olaf’s neighbor, the cheery and alone Justice Strauss (Joan Cusack), who has a library that provides answers and ideas that will help them get out of Olaf’s control. Every now and then, the narrator Lemony Snicket (played by Patrick Warburton) appears to tell us how despairing things are, and will continue to be. 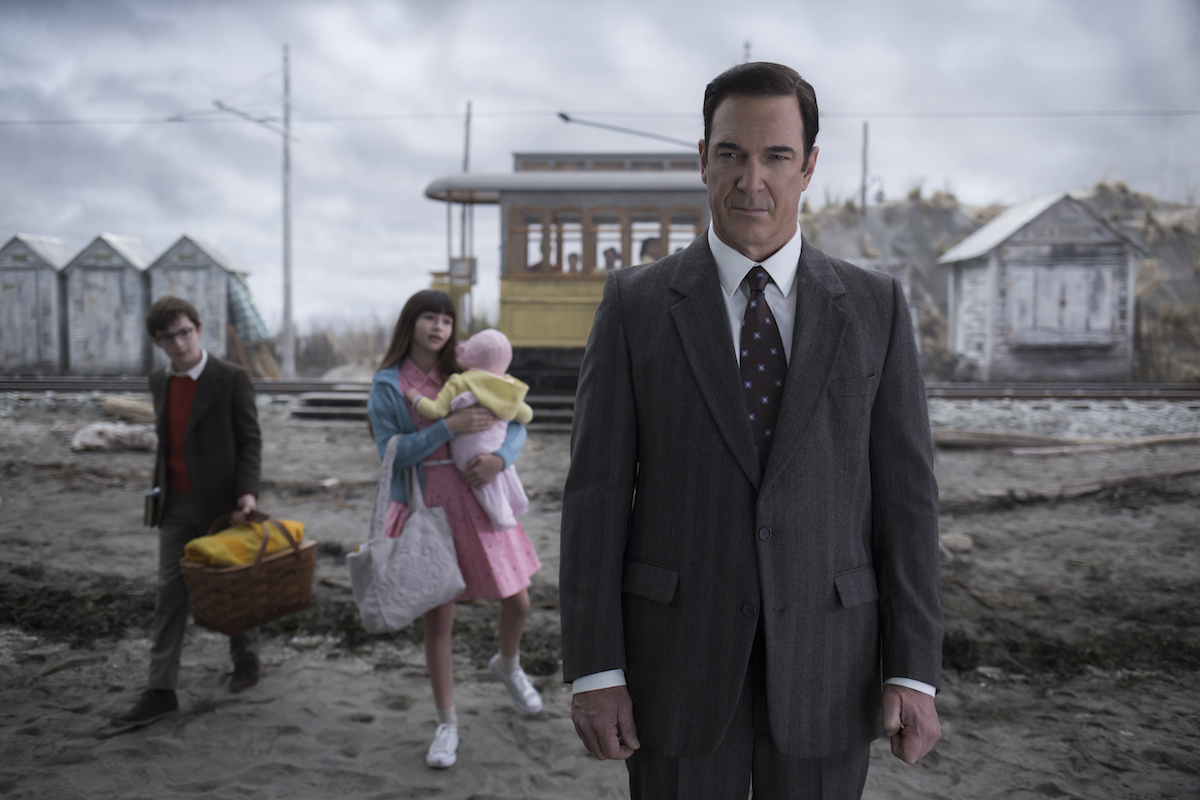 By episode three, the series gets into full swing by going to book two in the series, The Reptile Room, and by showing that it’s apparently going to work with the original books in more detail than the original film (which combined three books into one movie). Now, Olaf’s role changes from host to hunter, as the scheming actor tries to get to the children, while a new guardian (Aasif Mandvi’s reptile-loving Dr. Montgomery Montgomery) tries to protect them. Meanwhile, a secret society is hinted at, phrases like “a conundrum of esoterica” are thrown about, and the lives of the parents is revealed to be a mystery itself.

The series is promising in the beginning, with an opening theme song sung by Neil Patrick Harris (like if Muse wrote a self-aware Broadway tune) and intriguing aesthetics, painted like a very cloudy Wes Anderson movie. But once the story gets in motion, piling on the cruelty of others and the way these kids stick through it, the series doesn’t quite come together. It’s never as clever as it wants to be, and the dark, dry sense of humor never shines because it relies on Handler's dialogue instead of sharp line-reading or editing to make its point. The stiff acting from its young performers is passable, but if its meant to make them seem further innocent, it isn’t very charming. The same goes with the overly-corny adult performances, although Harris has some clear fun with his role, which allows him to make fun of bad actors while hamming it up as he pleases. The production design adds a bit more character, especially the detail of ugliness in Olaf’s house. Most of all, it does a good job in distracting the viewer from how genuinely depressing this story would be if the same events happened in reality.

Future episodes have the promise of being repetitive, if not overlong, but it’s comforting that the show is actively intelligent, and thinks the same of its viewers. Word definitions are a constant discussion, thrown around like souvenirs for anyone who doesn’t know them. But the series is just too glib with the ideas it intentionally wants to prod the viewer with, especially how death does not guarantee the world’s kindness. There is nothing interesting about Olaf’s abusiveness, or the community’s initial deafness to his cruelty, and the cartoonish sequences that come of those concepts. It makes for more of a confounding, tricky atmosphere more than anything else. Along with Warburton’s asides as Lemony Snicket, his words ready for a suicide note, the series becomes an unfunny parody of sadness.

"A Series of Unfortunate Events" is a very delicate balancing act that I still don’t think quite works, but I’m happy for the viewers who do like these stories that a full-fledged production is now available for them, a type of fan service of uncommon generosity. It’s just up to your sense of humor as to whether this is an elaborate contraption or just a franchise that denies death.