Distributors of theatrical feature films opening this weekend need to honestly worry about the full-season premiere of “Daredevil” on Netflix. A lot of the folks with the expendable income to go to the theater every Friday or Saturday will be binging this surprisingly engaging adaptation of the Stan Lee classic comic book character. Yes, we can finally put visions of Ben Affleck in red in the rearview mirror as Matt Murdock has at long last been given the treatment his legions of fans have long-claimed he deserved. Existing somewhere between the comic book TV series that seem to dominate more of the airwaves every year (“Gotham”, “Marvel’s Agents of S.H.I.E.L.D.”, “Arrow”, “The Flash”) and the film universe of Christopher Nolan’s “The Dark Knight”,” Daredevil is an intelligent, well-crafted drama series that may be a little thin on actual action for those expecting the CGI orgies associated with the modern Marvel logo but contains the nuance and character that has been missing from most of those blockbusters. 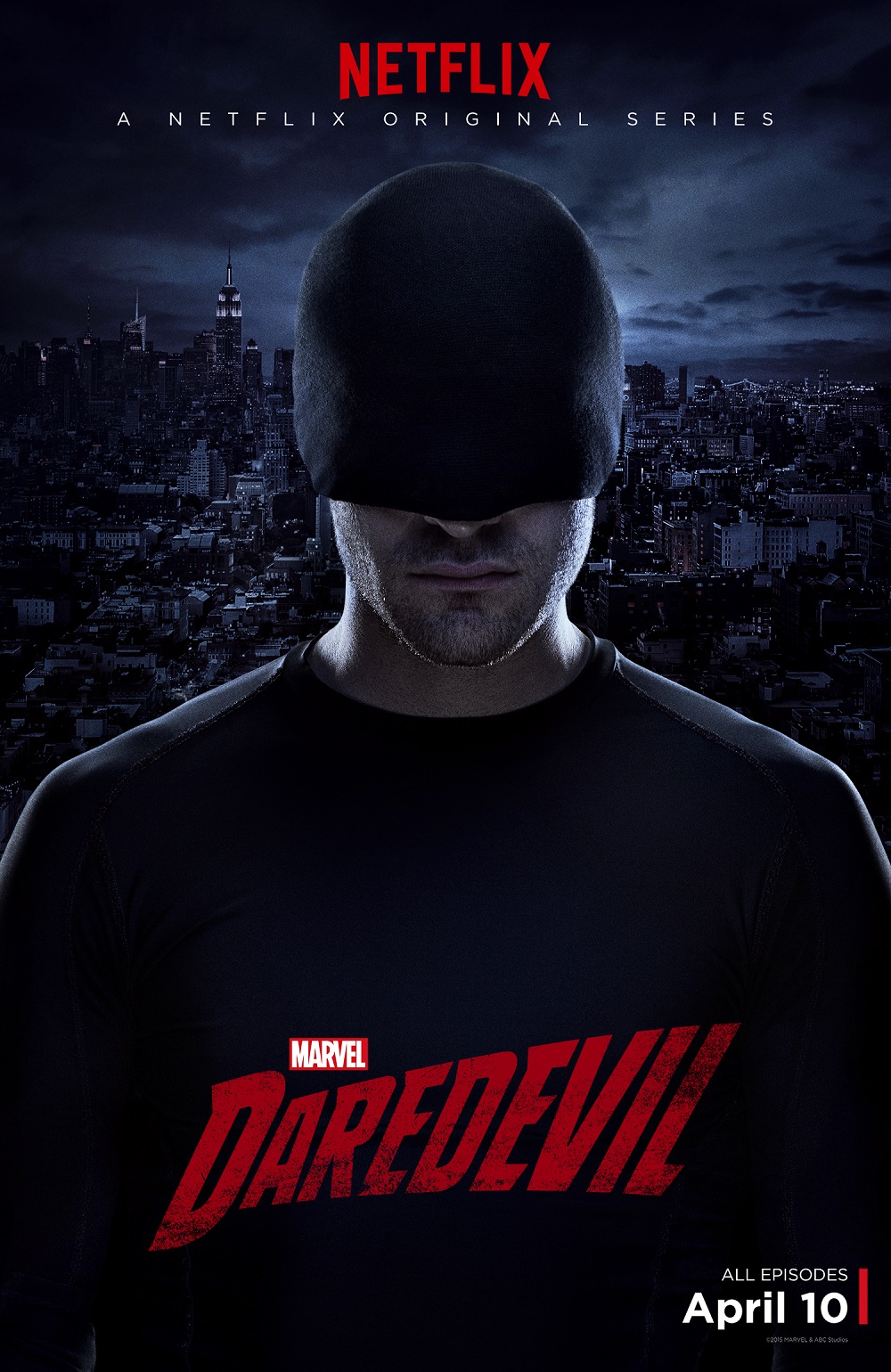 For a lot of TV fans, it won’t be the Marvel logo that draws but the participation of Drew Goddard, one of the best TV creators of the last two decades, as evidenced by his work on “Buffy the Vampire Slayer”, “Angel”, and “LOST”. Hardcore fans of those shows need only know that he wrote “Conversations with Dead People” and “The Man from Tallahassee” to put him on the TV writer version of Mt. Rushmore. Goddard wrote the first two episodes of “Daredevil” and then had to jet to work on “Sinister Six,” but he poured the foundation for the show and then passed it on to Steven S. DeKnight, a fellow graduate of the Whedon-verse and acclaimed writer from “Buffy”, “Angel”, and “Dollhouse”, as well as the creator of the “Spartacus” series on Starz. These are talented TV creators and the pedigree shows right from the opening scenes.

Much like Bruce Wayne, Matt Murdock (Charlie Cox) is merely a man who has turned tragedy into something that pushes him to be better than the average man. There are no superpowered heroes or villains in “Daredevil”—just men more driven to polar extremes of good or evil than anyone you know. Murdock was blinded by a car accident when he was a child, which enhanced his other senses, allowing him to “see” the world around him in a way that most people can’t. He can hear raised heartbeats, smell specific colognes down the hall to know someone is coming, etc. Murdock also became an attorney, opening a small practice with friend Foggy Nelson (Elden Henson). He defends the needy during the day and serves as their vigilante at night, dressed in all-black, dispensing justice by breaking bones.

In the premiere, Murdock and Nelson get handed a unique case in the story of Karen Page (Deborah Ann Woll of “True Blood”), a woman found covered in blood next to a dead man, professing her innocence. She went out with a guy, had a drink, and the next thing she remembers is being arrested. What happened? It turns out that Page was working at a major corporation and uncovered some, shall we say, improprieties in the bookkeeping. Her story connects Murdock and Nelson to the criminal enterprises of the one and only Wilson Fisk (Vincent D’Onofrio), a man whose name isn’t even allowed to be spoken by his underlings and who Marvel fans will know better as Kingpin. She also crosses paths with an investigative journalist played by the great Vondie Curtis-Hall, who recognizes that Page doesn’t fully grasp the dangerous world in which she now treads. 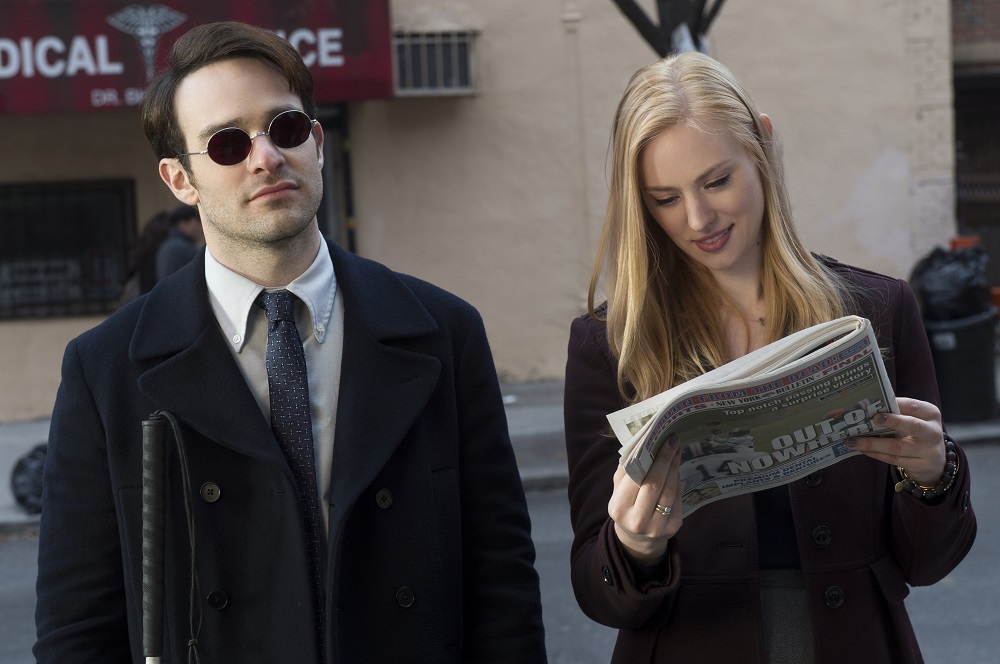 The premiere of “Daredevil” is strikingly confident, filmed like a theatrical offering more than a TV show. And one never gets the sense that the show is targeting teens like the CW offerings, taking time to really be a crime procedural as much as a superhero show. “Daredevil” is more drama than action, which is likely to be the biggest complaint from Marvel fans. It’s nearly a courtroom drama at times, focusing more on the criminal world of Hell’s Kitchen than anything heroic. It is really stylishly made, which is what has been lacking from the Marvel universe lately. And, to be fair, when the action kicks in, it has a visceral brutality that’s effective. This is a dangerous world. Cross Daredevil or Kingpin and you won’t just be in typical comic book movie trouble; you will suffer. Some of the action sequences recall “The Raid” in their intense, hand-on-hand combat, although Nolan’s “Dark Knight” trilogy is very clearly the visual inspiration here, as well as thematically related with its focus on a good man in a city overrun by crime, and the innocents who often suffer as collateral damage.

The second episode pulls back a bit to introduce us to Claire Temple (Rosario Dawson), a woman who finds a nearly-dead Murdock after a fight and nurses him back to life. This episode also gives us a lot of flashback to a young Matt and the saga of his boxer father, forced to deal with the criminal underworld himself. It’s narratively rewarding but a little slow in its execution, and I find Claire’s arc the least effective over the next few episodes. The modern-day narrative kicks back in for episode three and the strong pace of the first episode returns.

As for performance, Cox grounds Murdock/Daredevil in relatable human emotion, making him more vulnerable than iconic. This is a Daredevil who is as morally heroic as he is physically adept, and that’s refreshing in the TV world of superheroes. Woll and Henson are effective but the supporting roles are stolen by a number of great character actors including Curtis-Hall, D’Onofrio, and Bob Gunton.

Netflix made waves when they announced production of four Marvel series to air exclusively on their service. I’ll admit that I kind of blew off the announcement as just more comic book news. The stories about Marvel movies are so commonplace that they become kind of like internet white noise at a certain point. And so I kind of approached “Daredevil” with no expectations at all. Despite being a huge “Buffy” fan, I didn’t even know Goddard and DeKnight did it. And so I approached “Daredevil” as someone slightly exhausted by the domination of comic book properties in modern entertainment. I watched all five episodes in a 24-hour period and would have watched five more. Cancel your plans for Friday.