Joe Swanberg turns his eye for observational dramedy about the ups and downs of relationships—and how much of ourselves we lose when we partner with another—to television with the eight-episode streaming series “Easy,” starting this Thursday on Netflix. Gathering a talented ensemble that includes several previous collaborators (Orlando Bloom, Jake Johnson, Jane Adams) and inviting some new players to the party, Swanberg tells a different story each episode (except for the last one, which circles back on a previous half-hour with a new angle). Each half-hour is relatively simple in terms of plot, allowing Swanberg to play with questions more than answers. How much privacy should the partner of an artist expect? How does impending fatherhood change workplace goals? How do perceived gender roles impact a couple’s sex life? As with most anthology series, the results can be a bit inconsistent, and I wish Swanberg was allowed to work more with length (some of these would have worked better at 20 minutes, others feel like they could have used twice as long), but Chicagoans especially should like this tour of the North side of their city and listening to the stories that Swanberg has to tell. 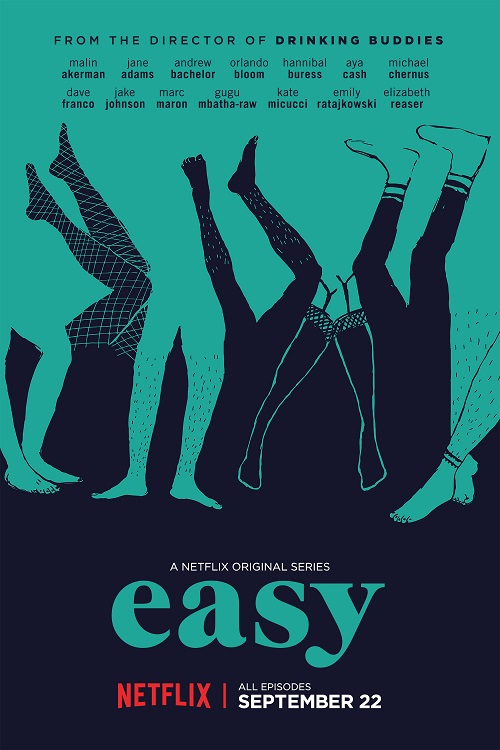 How Chicago is “Easy”? Episodes take place at the Half Acre Brewery, Revolution, Dark Matter, Wiggleworms at the Old Town School of Folk Music, the Davis Theatre, and the finale includes guest appearances by Arthur Agee of “Hoop Dreams” and some of the staff of Newcity (including film critic Ray Pride). Swanberg has never been shy to use his hometown as his backdrop, but “Easy” takes it to another level, almost feeling like a love letter to the north side of the city. It’s his “Chicago Stories.”

What is “Easy” about? Each episode has a different cast and story but they all feel cut from a similar cloth given location, style, and the themes that Swanberg likes to explore. He comments on modern gender roles in the first episode, in which a couple in which a husband stays at home and the wife works starts to question how their situation impacts their sex life. A party conversation on the subject leads to an awkward Halloween in which she dresses up like a “Hot Housewife” and he pretends to be a construction worker. The second episode first seems like a different direction, but it’s also about someone pretending to be that which they are not as it details a woman who tries to become a Vegan and more regularly ride her bike because she thinks it will impress her new activist girlfriend. Other episodes include appearances by Dave Franco, Marc Maron, Malin Akerman, Orlando Bloom, Hannibal Burress, Jane Adams, Gugu Mbatha-Raw, and many more.

The Maron episode, the fifth, is the best of the bunch, and feels at least somewhat biographical. Maron plays a writer who worries that he’s past his prime artistically, a sensation not helped by the fact that he called his latest novel Obscurity and goes to a book reading attended by about a half-dozen people. He notoriously puts himself and his partners in his book, but he gets upset when someone he meets (Emily Ratajkowski) decides to use their relationship in an art form that he deems insignificant—selfie portrait art. The way artists use people they know in their work—and Swanberg has certainly done this to some degree in the past—makes for fascinating subject matter, and Maron is fantastic.

Other episodes have a tendency to feel narratively forced. The couple (Akerman & Bloom) looking for a threesome because they're convinced they “missed out on Tinder” is familiar and underdeveloped, for example. Dave Franco's episode about home brewing, despite how much love it shows the great Half Acre, doesn't come together. But most episodes of “Easy” have at least one thing to keep them interesting, whether it’s a theme that Swanberg is exploring or even a great performance (Mbatha-Raw is wonderful in just a few scenes in her episode, the seventh). Overall, Swanberg expands his canvas to fit the city he loves and sketches a Chicago filled with people caught between dreaming for their futures and living their day-to-day lives. If some of the sequences aren’t as filled out as the others, that’s to be expected. “Easy” is a series of short stories by someone who knows Chicago as well as any modern filmmaker. Pick your favorites.