I Am Not a Gun: The Timelessness of “The Iron Giant”

Brad Bird’s “The Iron Giant” was released on August 6, 1999 in over 2,000 theaters across the country. It was almost entirely ignored by moviegoers, opening in ninth place, behind the first weekends of “The Sixth Sense,” “The Thomas Crown Affair” and “Mystery Men,” and even the third weekend of “Inspector Gadget.” Despite near universal acclaim, the film was out of the top ten two weeks later, bringing in only $23 million domestically on a reported $80 million budget. It barely added to that total internationally. And yet here we are 17 years later, not talking about theatrical re-releases of other films from that summer or signature edition Blu-rays. One of the best animated films of all time, “The Iron Giant” is arguably more popular than ever with posters and toys still popping up at comic-cons (I should know, I bought one recently) and now a gorgeous remastered version of the slightly-different signature edition of the film. Why? What has made “The Iron Giant” timeless while even other critically acclaimed greats have relatively disappeared? The new Blu-ray has some cool special features but it truly answers these questions through the sheer force of its filmmaking and storytelling. 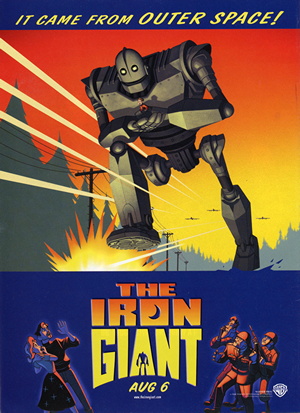 As he so often did, Roger got it right away: “'The Iron Giant,' based on a book by the recently deceased British poet laureate Ted Hughes, is not just a cute romp but an involving story that has something to say.” And that message is multi-tiered. One of Brad Bird’s gifts as a filmmaker is in his refusal to talk down to children, never repeating messages as tirelessly as we so often see in family films. There are so many lessons to take away from “The Iron Giant,” including big ones about friendship and violence, but it also subtly offers topics that children may not even realize they’re considering about identity, destiny and family. And it doesn’t hurt that the look of “The Iron Giant,” with its gorgeous hand-drawn animation that Roger pointed out looks more like Miyazaki than Dreamworks, hasn’t aged visually at all. Look at something like “Wild Wild West” or “The Mummy” from the same summer and you can see the fingerprints of that era. “The Iron Giant” looks like it could come out today were English-speaking countries not in a state of denial over the artistic potential of hand-drawn animation.

In case you’re unfamiliar—“The Iron Giant” is about the wonderfully-named Hogarth Hughes, a nine-year-old boy living with his single mother (voiced by Jennifer Aniston) in a coastal town. Much like E.T. descending from the heavens—and the Spielberg touches in Bird’s film are plentiful—the title character (voiced by Vin Diesel) appears in the woods near Hogarth’s house. He befriends the giant, metal man, working with a local artist named Dean McCoppin (Harry Connick Jr.) to keep his presence a secret, which can be difficult when something is bigger than most of the buildings in the state. When the military, personified by the warmongering Kent Mansley (Christopher McDonald), starts looking for The Iron Giant, we learn that this gentle giant can also fight back. Whenever attacked, he essentially changes form, turning into a killing machine, but regretting it when he switches back to Hogarth’s friend. He doesn’t want to be violent. The movie’s most powerful message is about changing your own destiny. The Iron Giant may have been created to destroy, but human connection can change creator’s intentions. In one of the film’s most memorable lines, Diesel imbues five little words with so much meaning: “I am not a gun.” 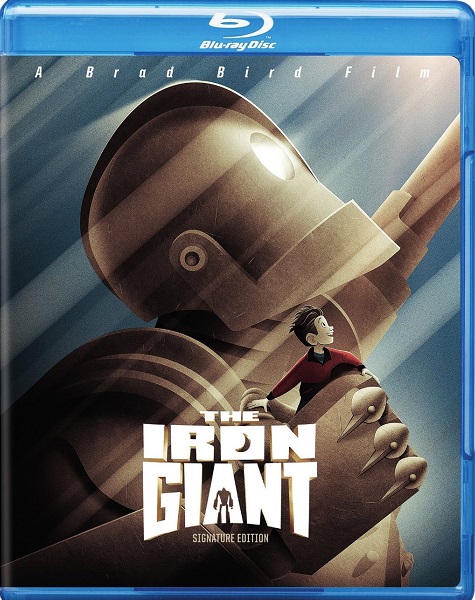 The message of peace and sacrifice feels more urgent today than it did even in 1999. In the world of “The Iron Giant,” violence propagates violence, and it’s violence from the establishment—the military—and lies about the need to use such violence, that starts the climax of the film. Even before that, Bird layers his story with so many subtle, detailed lessons that kids ingest on a subconscious level. Watching it again on Blu-ray—looking better than it ever has—I was struck by my son’s reaction to the scene in which the Giant rushes to put a train track back together again. Unlike in SO many family films, in which he’d barely do so in time and retreat to safety, he doesn’t succeed. He gets hit by the train. First, we get the lesson that it’s OK to fail—Hollywood films so often miss that one, giving kids images of infallible heroes. More importantly, he gets up and puts himself back together after the train hits him. We can overcome damage. We are resilient. And it is how we respond that matters.

That’s the theme that works its way through all of “The Iron Giant” and it’s captured so beautifully that I’m confident people will be watching this film for generations (and I’ll save my appreciation of the visuals of Bird’s films for another time other than to say it’s gorgeous). It’s not the destiny myth that we see so often in family cinema but a story of empowerment. Hogarth Hughes, living in an era of nuclear bomb drills, doesn’t need to be afraid. His new friend, The Iron Giant, doesn’t need to be a weapon. It’s not the inciting incident but how we respond to failure or violence that matters. “You don’t have to be a gun. You are who you choose to be.” You can even be Superman.

To buy your Blu-ray copy of "The Iron Giant: Signature Edition," click here.