HBO's "Westworld" Will Be Your Next TV Obsession

HBO’s long-delayed and highly-anticipated “Westworld” finally lands on Sunday with more expectations placed on it than any show in recent memory. HBO really wants it to be their next “Game of Thrones,” especially after notable missteps like “Vinyl” didn’t take off with viewers. Based very loosely on the 1973 film of the same name by Michael Crichton, “Westworld” could be a tough sell to a mass audience. It’s a sci-fi/Western hybrid, a show that has echoes of “LOST,” “Deadwood,” “Memento” and “Blade Runner” in its incredibly ambitious DNA. "Westworld" comes with one of the most pedigreed casts in the history of television, and boasts film caliber production values, but it is also a deeply philosophical, complex show. It's more about the meaning of life than gunfights. The premiere, airing October 2nd, is fantastic—introducing us to the core characters of the piece while also starting to unravel thematic connections that feel like they will carry the show. Subsequent episodes sometimes feel a bit unfocused—this is a show that could easily frustrate viewers in the way it asks more questions than it provides answers (a la “LOST” at times)—but it’s certainly never boring, and I’m hooked enough that I can’t wait to see where it goes next. 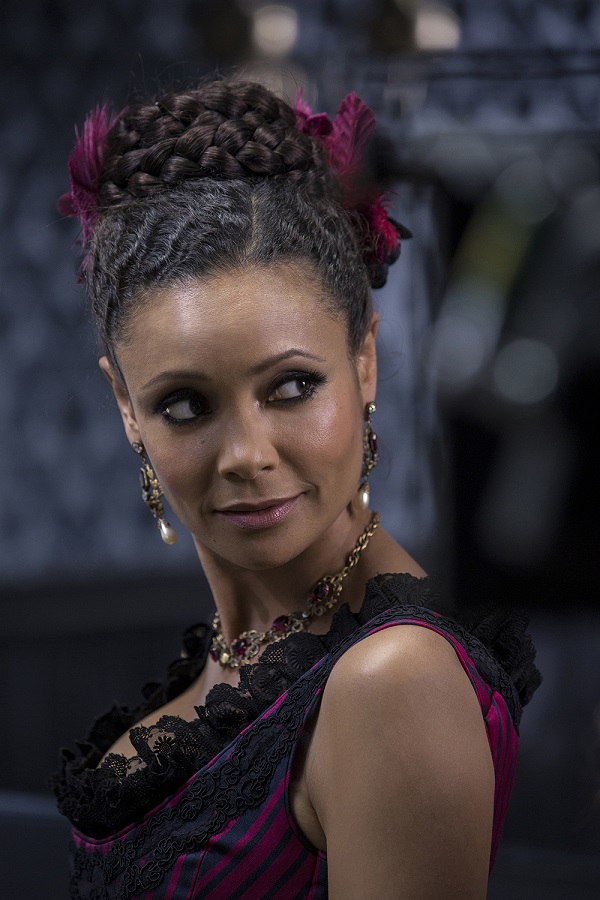 A young woman in a frontier town wakes up, says goodbye to her father and rides in to visit the local shop. Her name is Dolores (Evan Rachel Wood), and all she’s ever known is this quaint patch of land and the people who dot the streets of this four-horse town. At the same time, a young man named Teddy (James Marsden) steps off a train and into a nearby saloon. He spots Dolores. She’s the one he’s come to see. They have a history, although she never expected that he’d return for her. Their feelings for one another feel genuine. They go back to her house where a Gunslinger (Ed Harris) clearly designed after Yul Brynner’s in the Crichton film kills them. In a reversal of the film's storytelling, the Gunslinger here is the human/villain and the robot is the victim. The Man in Black is just a visitor to Westworld, an adult amusement park where people can live their wildest fantasies. Want to stage a bank robbery? Sleep with a saloon girl? You can do whatever you want in Westworld and the robots—including Dolores and Teddy—will just wake up tomorrow like nothing happened.

At least that’s what’s supposed to happen. Without spoiling anything, things start to go awry in Westworld, and it’s the head of the Programming Division, Bernard Lowe (Jeffrey Wright), who first notices the issues with Dolores. Dr. Robert Ford (Sir Anthony Hopkins), the founder and head of Westworld, is fascinated by the changes within the “hosts,” while he’s also planning a new “narrative” for his creation. Meanwhile, subplots play out within Westworld—including two new guests (Jimmi Simpson & Ben Barnes) at odds with each other, the Man in Black’s journey to find the ultimate game within the game, and Madam Maeve Millay’s (Thandie Newton) discovery that everything may not be what it seems.

“Westworld” is an examination of what it means to be human, told mostly through the eyes of the non-human characters. The visitors to Westworld are often vile, horrendous people—the kind who would pay a year’s salary per day just to screw and kill without repercussion. It’s the hosts that engender our sympathy, the ones who aren’t even allowed to hold on to their own memories and their own emotions. We learn a lot about the programmers as well in subsequent episodes, including a tragedy in Lowe’s past and how Ford created this place. Only the humans can’t wipe away the horror and the grief the way the robots of Westworld get to every night. At its best, “Westworld” is a fascinating, philosophical study about the fact that it is memory—how it allows us to learn and grow and change—that makes us human.

The performances here are uniformly stellar, right down to one-episode roles. Stand-outs include Jeffrey Wright, who captures a man whose work is more than just a job to him. As his creations begin to surpise him, you can sense true wonder at a program exceeding his expectations. Evan Rachel Wood is fantastic, grounding the show emotionally—although the also-excellent Thandie Newton gets to share some of that burden in later episodes. And Harris has rarely been this menacing. He’s terrifying, reminding us that pure human aggression with no moral or authoritarian controls over it can be the scariest thing in the world. Really, everyone here is good. It’s the kind of show that’s so dense with characters, plotting and philosophy that the quality of its cast will be taken for granted.

As I said, “Westworld” gets a little cluttered as the four episodes sent to press unfold. And it’s a really difficult program to judge without knowing where it’s going. In other words, this could be totally goofy nonsense by Thanksgiving. But what I’ve seen so far has stimulated me philosophically while also just being incredibly entertaining, well-made, well-performed television. The expectations for this show may be so high that they couldn’t possibly be reached, but I’m hopeful that we’ll look back on these four episodes as the start of something truly amazing. What’s more human than hope?