FOX Enlists "Lethal Weapon" and "The Exorcist" for Familiar Thrills

Remake cynicism notwithstanding, there is a curious element to FOX bringing two franchises back from the dead as TV shows, "Lethal Weapon" and "The Exorcist." What would these two R-rated movies franchises look like, as distilled into a primetime TV slot and without their edges of violence? Whatever their intentions, these new series prove to primarily service nostalgia, or forgetfulness, more than offering a unique take on properties that have proven fruitful on the big screen numerous times before.

“Lethal Weapon” (airing tonight) is able to establish the familiar but doesn’t prove that it can make a name for itself. Clayne Crawford plays psychotic cop Martin Riggs, who is still dealing with the trauma of losing his pregnant wife to a car accident, and is now back on the force by mysterious means. With Riggs not given a gun due to his condition, he’s paired up with the the much more stable Roger Murtaugh, a father and husband who has been on the force for numerous years, but hasn’t seen too much danger.

Set-piece by set-piece, “Lethal Weapon” becomes more of a typical cop procedural show, as the two LA Cops investigate a suicide in the pilot, and a dangerous weapon deal in episode two. Director McG keeps things relatively peppy, using a handful of in-your-face action scenes, where cars get smashed and explosions go off.

It’s a real challenge to look at the two performances without the original casting, especially when both characters have an iconography deep within the buddy copy genre. Wayans does well taking on the domestic, sane character made famous by Danny Glover, seeming like he could aptly sell a cover of “I’m too old for this shit!” if only the non-cable ratings would let him. And some of the scenes with his family prove to have the most edge (although I wish his on-screen wife played by Keesha Sharp would be written with more to do than act like his mother or sex partner).

But it’s Crawford, a relatively new face (who was Ted Talbot Jr. on “Rectify”) who arguably has the bigger task but is still uncertain. As the spice of “Lethal Weapon,” Riggs comes down to heavy doses of charisma, something that Mel Gibson was able to offer plus more in the original. As he plays with his wavy, erratic hair and tries to emulate crazy look in his eye, Crawford creates less of a fresh idea of Riggs and more of a serviceable imitation. He can express the trauma and isolation within the character (and has a couple nice moments with his therapist, played by Jordana Brewster) but without the appeal of Gibson, he’s a bit out of luck. Most of all, there becomes a clear difference of Crawford playing Riggs like someone who does not care if he dies, as opposed to Gibson’s fully-body lunatic idea of someone who is looking for a chance to.

The original “Lethal Weapon” movies were like a romantic comedy of sorts, about two extreme opposites who become partners, and the series does cement this emotional foundation by the beginning of the second episode. Even better, while their performances aren’t so much as fresh but trying to keep you from turning off the series and just watching the originals, Crawford & Wayans establish a palpable dynamic. It would be nice, though, if the series offered something new, or worth recommending. As passable as the series is, watching the originals never seems like a lesser option. 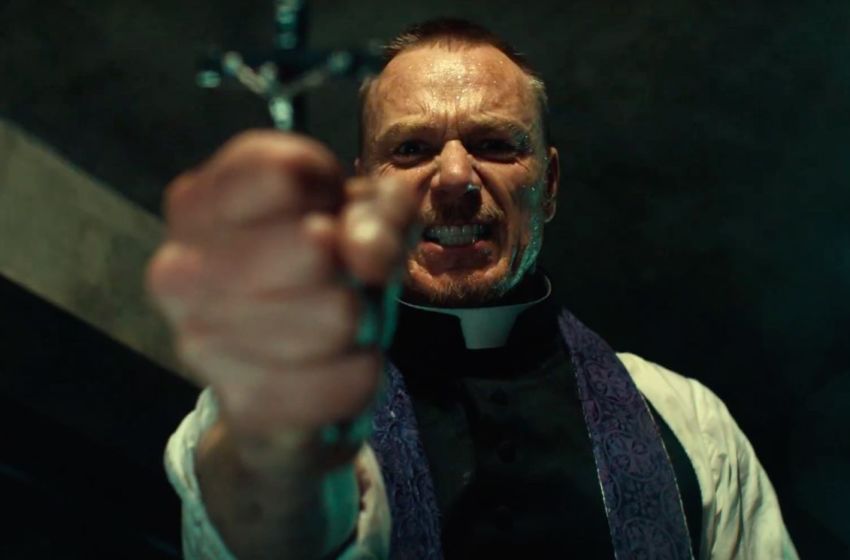 The first episode for FOX’s remake of “The Exorcist,” (airing on September 23) gets off to a great, distinct start. Through sheer aesthetic confidence, using contemplative long takes and effective score, it grabs you with its atmosphere before the demons show up. The title then slams in your face, in big, bright red text—another directorial choice from Rupert Wyatt that’s more film than than TV ready—and that was the point on which I was on board.

That energy proceeds to amass slowly but curiously as it introduces characters working with their own issues. A young Chicago priest, Father Tomas Ortega (Alfonso Herrerra), is struggling with his faith while telling a concerned parishioner named Angela (Geena Davis) that a demon can’t be in her house, as demons are merely metaphors. Meanwhile, we see images of a different priest in South America, the unpredictable Father Marcus Keane (Ben Daniels, at times with a Michael Fassbender-like edginess) going off the radar during an intense exorcism assignment.

But about halfway through, the energy drops off. A climactic first meeting between the two priests as they address their supernatural connection, who will then take on Angela’s demon problem, showed how the slow build only gets so far. A few more jump scares follow—replete with some bone-crunching visuals and other gross goodies, but the vanishing good graces of “The Exorcist” left me uncertain as to what could help this series excel in later episodes, especially if this is just about all it has to offer. Although I'd probably never ask a friend this if they were possessed by Satan, “The Exorcist” pilot had me shrugging and wondering: What’s the worst that could happen?