Checking in “With Bob and David” on Netflix

It’s been 17 years since “Mr. Show” rode off into the TV sunset, becoming almost legendary in an instant. The HBO sketch comedy program pushed boundaries and made David Cross and Bob Odenkirk celebrities, at least in certain circles, for their incredible wit and willingness to try different kinds of comedy on TV. What they did with “Mr. Show” is the closest that television has come to a show device called a “Harold” in improvised comedy. In a Harold, sketches don’t just stand alone, they callback to each other thematically or literally, and often exist within a specific structure of comedy. “Mr. Show” was never that structured, but for viewers who had grown up on shows like “Saturday Night Live,” in which one sketch never comments on or calls back to another, it was daring stuff. And HBO’s license to offend gave Odenkirk and Cross the freedom comedians often need to do brilliant work. For the nearly two decades since, as the two have gone on to co-star in two of the most important shows of the current era in TV (“Breaking Bad” & “Arrested Development”), we’ve held out hope that “Mr. Show” would rise again. They did a tour and a really bad movie (“Run Ronnie Run”), but it took until this week in late 2015 for “Mr. Show” to rise again in the form of “With Bob and David,” a four-episode mini-series to premiere on Netflix in its entirety this Friday. 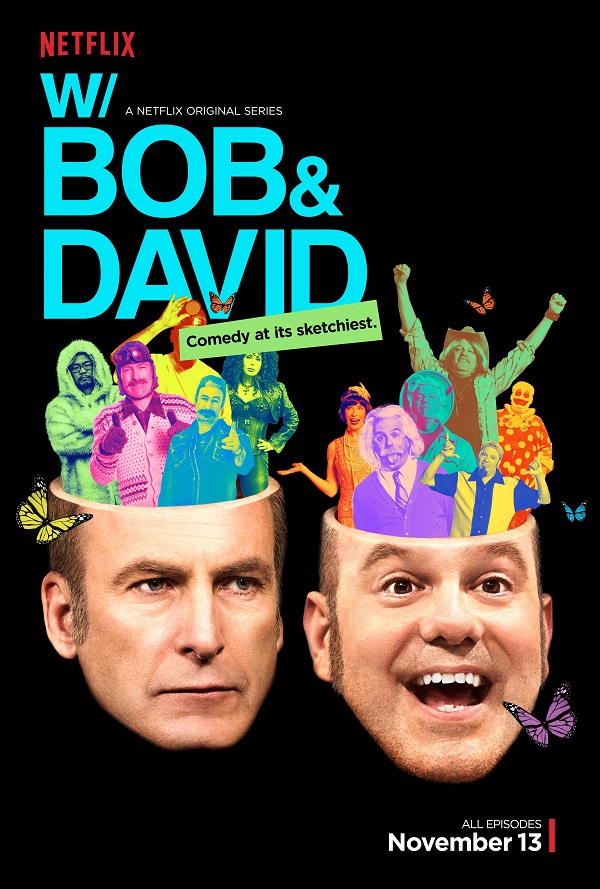 From the two episodes I’ve seen, “With Bob and David” definitely has a similar sense of humor to “Mr. Show” but a different tone. It feels more like a casual affair, something that Odenkirk and Cross did on a break from things they take more seriously. They are such brilliant writers and comedians that their talents make the result of that “break project” entertaining, but one wonders how this might have turned out with a bit more concerted effort. It’s so loose and fast and strange that some will embrace the show for it its sheer oddity—not to mention its willingness to offend, which could get the pair in a bit of hot take trouble—but it’s a show that I worry will be a little too inconsequential for the legend of Bob and David. Four mostly-funny half-hour episodes are nice, but they’re nothing compared to what “Mr. Show” means to a lot of sketch comedians.

About that offensiveness, it is interesting to me that Odenkirk, Cross, and the people at Netflix are as unafraid as any sketch comedy show I’ve seen in recent years when it comes to hot-button issues. In one sketch, Cross, playing a man filming his own “Know Your Rights” video segment, tries to get a cop (played by the great Keegan Michael-Key) to abuse him at a checkpoint, and keeps failing as the officer is just doing his job. The sketch ends in a way that I won’t spoil but that some might find offensive. Some may also be turned off by Mary Lynn Rajskub playing a deaf woman in another sketch, even if she’s not the brunt of the joke (which is actually pretty hilarious as a contestant on a cooking show realizes he doesn’t have the human interest story of the hearing-impaired contestant or the one who lost his family in a hurricane and so he starts making shit up.) Cross even plays a filmmaker who is trying to revise slave history in one sketch, showing clips from his movie in which the “Workers” (not slaves) are treated well and paid with hugs. I think most people will recognize that Cross and Odenkirk are mocking offensive behavior and not just engaging in it, but it’s still risky in today’s society. And don’t get the wrong impression—“With Bob and David” isn’t all edgy, hot-button issues. It is often at its best when it’s delightfully strange. No other show could pull of a sketch that climaxes in Odenkirk becoming the pope and riding an ATV, shouting “I can eat like a f**king idiot with no repercussions!”

Will people even notice? With “Master of None” landing last week and “Marvel’s Jessica Jones” next week, Netflix clearly wants to own your November, and it kind of feels like “With Bob and David” is being dumped in between their two biggest programs. Much was made about how poorly HBO treated “Mr. Show,” never promoting it to the degree they should have. Maybe if “With Bob and David” doesn’t feel like an event, that’s in keeping with the legacy of the show that spawned it. People found “Mr. Show,” and people will find “With Bob and David.” And people will laugh. In the end, legacies lived up to and the disappointing length of this season doesn’t matter as much as that fact—people will laugh.