The antagonistic, bleak "Batman v Superman: Dawn of Justice" at least has good timing during this election season. Not that it leans towards any particular political direction, but that its home theater debut too is an event, a convention of sorts. For some fans, its Blu-ray release on July 19 may provide a bit of damage control, especially after so many unofficial blunders of online memes and discouraging box office results. But for others, it could be a type of DC Comics rally, supporting the cause of being anti-Marvel, ready to vote with a ticket purchase to "Suicide Squad." What we can all be united by, however, is that the word “ultimate” now means nothing other than “big." Case in point: There is nothing definitively ultimate about this package of an even longer cut and talking head special features, just more evidence that Snyder's vision of super-heroism may be some of the least fun ever created with billion-dollar comic book entities.

First, the main event: a three-hour version of the original movie (reviewed by Matt Zoller Seitz here), now boasting a toothless R-rating and 30 extra minutes. Those two qualifications don’t mean that there’s an extra (or extended) bloody fight scene or that Batman says the “F” word more than two times, but that a lot of fat has been surgically reattached. The most distinct additions regard two subplots for minor characters: one, a woman who witnessed Superman’s appearance in Africa and helps spread the lie that he killed innocent people, and, two, a convict whose doomed fate after being branded by Batman indicates how influential the Dark Knight has become within the justice system. These two stories provide a larger scope of the influence the title heroes have on the world, which ultimately speaks to the poor visual storytelling of the original cut—that instead of presenting cogent ideas within narrative, it relies on direct, flat representations, like visualizing the debate about Superman’s purpose by literally putting him on trial. This subplot about Batman and Superman’s collective influence on society could have been tackled succinctly with some good writing. Instead, we already have the talking heads montage of people like Neil deGrasse Tyson and documentary filmmaker Vikram Gandhi verbalizing a question about Superman’s god status.

Other additions within "Ultimate Edition" are minor, like an extra phone call between Martha Kent and her super son Clark, or a few more scenes with Laurence Fishburne’s Perry White complaining about reporter Clark being distracted with investigating Gotham’s obvious crime problem. Even new characters lack exciting action, like Jena Malone’s character listed on IMDb as “Jenet Klyburn,” which some have speculated is somehow Barbara Gordon, AKA Batgirl (inevitably). Her appearance, to look down her nose at an investigating Lois Lane, feels like a moment that was debated in the editing room, but other reinserted pieces have the extraneous aura of being planned for a Blu-ray long before the film even hit theaters.

By ballooning the film, the “Ultimate Ediiton” certainly doesn’t fix the overall problems with the story, which are themselves “addressed” in the special features. This is where the Blu-ray functions like damage control, in which it tries to justify the movie’s laughably oppressive, tough guy tone by resorting back to the almighty canon. Namely, the title duel: Batman and Superman have battled before in comics, so they must fight in their first film together, a group of talking heads reason in special feature “Gods and Men: A Meeting of Giants.” The discussion then turns to the now meme’d “Martha” revelation, with different subjects trying to dress up the moment of peace as something less cheesy than convenient coincidence. In addition, a separate special feature breaks down the science of their battle in the fittingly titled “The Might and The Power of a Punch,” which adds further weight to how this series is more focused on spectacle than a viable motivation behind it.

Perhaps the biggest culture shock of “Batman v Superman” was Snyder’s version of the Dark Knight, of whom we had yet to see wield a shotgun like in this film, or dramatically hit a tire really hard with a sledgehammer. The special features “Batman: Austerity & Rage” and “Batcave: Legacy of the Lair” put into perspective, at the very least, that Snyder’s heavily-detailed sense of filmmaking had a personal jackpot once he got control of this other DC character. Or, in his own words, “I’m a fan, so I guess we just started to go nuts.” His team's description of Batman reveals so much about Snyder's primary motivations—to make a miserable, massive version of a beloved figure. There’s an impressive amount of production design ideas that are brought to light in these features, but the character’s effect remains a walking symbol of Snyder’s laughable self-seriousness, albeit one who can be too big to function. Poignantly, Batman’s fighting mech suit was designed too hulking to wear at certain key points in production.

Superman only has 43 lines of dialogue in “Batman v Superman,” and fittingly the discussion about his character is also underwhelming in the film or in the special feature “Superman: Complexity & Truth.” However, with much less screen time, Gal Gadot tried to rally viewers to a new version of Wonder Woman, one whose history is expressed in the special feature “The Warrior, The Myth, The Wonder" (Viewers curious about Wonder Woman should absolutely check out Kristy Guevara-Flanagan's documentary "Wonder Women! The Untold Story of American Superheroines.") In Gadot’s own special feature, “Wonder Woman: Grace & Power,” she remains the piece that still doesn’t come together in this project. Producer Deborah Snyder’s referring to Wonder Woman’s weapons as “toys” is quite disconcerting, to say the least, even before remembering the hero is mostly enacted in this film to battle a giant CGI monster named Doomsday, who is dispensed like any adversary of the week. 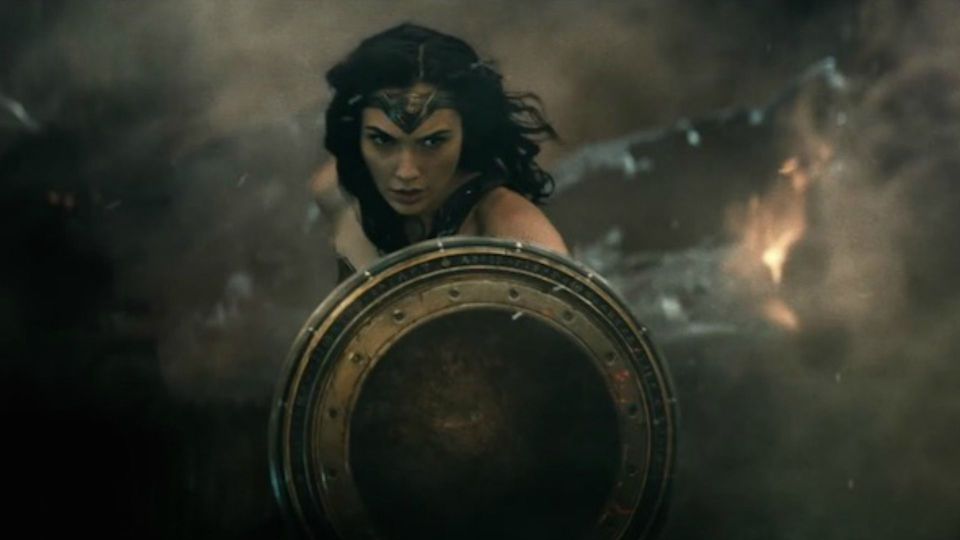 As the last major statement from DC before “Batman: The Killing Joke” and then next month’s “Suicide Squad,” the Blu-ray certainly rallies its party with its first special feature, “Uniting the World’s Finest.” The “Ultimate Edition” provides no new footage of the Justice League teasers in the middle of the movie, but this features a smidgen of behind the scenes material, with each actor explaining the ideas within their character (Ezra Miller’s excitement to be The Flash is contagious). This extra also gives a surprise look at certain shots from Patty Jenkins’ 2017 “Wonder Woman” movie, which most dispiritingly, seems to have the same lifeless, desaturated color palette as Snyder’s films (he’s recently been named a co-writer on the project, as well).

While “Batman v Superman: Dawn of Justice” takes up a strange place in superhero history, as an overall box office success that also dropped by a telling 69.1% in its second week, a few compelling elements shine through Snyder's boring darkness. As shown in “The Empire of Luthor,” Jesse Eisenberg’s take on the famous Lex Luthor antagonist was always fighting an uphill battle in stature, but his twitchy, rambling interpretation of the character is curiously subversive. Behind-the-scenes footage of Eisenberg performing next to a bunch of green screens illustrates the theatricality of his performance.

Enticing viewers with an R-rated version of a movie where Batman and Superman fight could be mere marketing, but it’s still a clear example of what this franchise resorts to for attention. Its theatrical cuts aren’t strong enough to enthrall viewers, so it must provide the action genre version of an unrated sex comedy, in which the action itself is often seconds-different to the theatrical cut—this one just dangles images of corpses, and maybe a few CGI blood spurts. By going big and feigning ultimate, this Blu-ray only makes more obvious the entertainment issues within Snyder’s overall vision, piling onto upcoming "Justice League" anxieties that we are far from out of his uninteresting darkness.

Special Features:
- Uniting the World's Finest
- Gods and Men: A Meeting of Giants
- The Warrior, The Myth, The Wonder
- Accelerating Design: The New Batmobile
- Superman: Complexity & Truth
- Batman: Austerity & Rage
- Wonder Woman: Grace & Power
- Batcave: Legacy of The Lair
- The Might and The Power of A Punch
- The Empire of Luthor
- Save the Bats