“Sublime Decay” is the phrase the arts critic and cultural entrepreneur Lawrence Wechsler coined to describe the work of filmmaker Bill Morrison, writing in the New York Times over a decade ago. It’s not an inapt term. While in the normal world of film viewing, peeling emulsion on a strip of celluloid is a sign of disintegration and potential ruin, to Morrison it’s the key to a series of different, magical images. A face nearly a century old loses half of its definition; in its place is mere blank space that a projection bulb exposes without mercy. For a normal projectionist, this is a flaw, maybe a fatal one. For Bill Morrison, it’s a possibility. 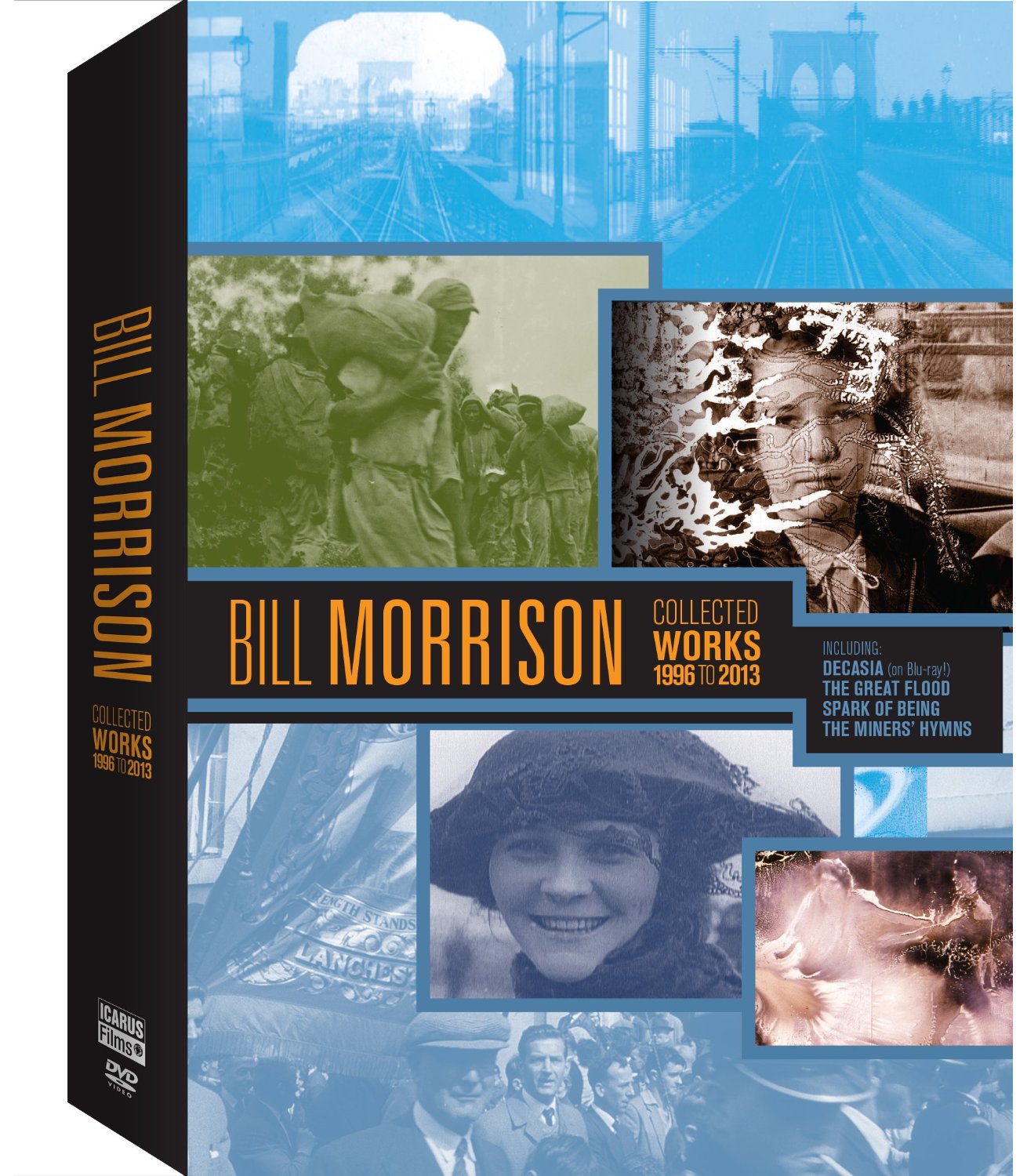 Morrison’s most famous film is the 2002 feature “Decasia,” in which he assembles decaying footage from a variety of films to construct an abstract narrative about mortality in all of its manifestations. Its staggering, poignant images are matched by an orchestral score—a symphony, in fact, by contemporary composer Michael Gordon. It’s a movie of unrelenting sensation; my favorite sequence shows a sea seen from a ship’s prow, the black-and-white image undulating with a mix of overexposure and literal cracking-apart, while Gordon’s strings slide down a scale at queasy intervals, creating an effect that’s both hypnotic and almost sea-sickness inducing. This movie has the pride of place in the wonderful five-disc set from Icarus Films, “Bill Morrison: Collected Works.” “Decasia” is on the opening Blu-ray of the set, while the remaining collected works are on standard-definition DVDs.

The other discs reveal Morrison as not “just” a manipulator of archival footage.  Much of his short work is shot by the filmmaker, but like his found-footage films, these movies investigate and exploit the physical texture of film and its relation to narrative convention and innovation. For instance, his 2000 film “Ghost Trip,” in which a Cadillac hearse navigates a River Styx made of asphalt, is shot in overexposed black-and-white, giving the images the look of a too-often reproduced photocopy, with blown-out whites and super-deep blacks, for a hallucinatory funereal effect. Elsewhere, Morrison works magic through the careful assembly and preservation of non-rotting film, as in “Reawakenings,” which puts Philip Glass’s music over an edit of Super8 film shot by Dr. Oliver Sacks of his patients of the 1960s coming back “to life” under the influence of the drug L-Dopa (a medical adventure chronicled by Sacks in his book “Awakenings” and the Hollywood film of the same name).

In his other major found-footage films, the melting of the imagery becomes a central event in the re-editing of 1926’s “The Bells,” an anti-Semitic propaganda film that Morrison “redeems” through his imaginative reediting in two films, 2004’s “Light Is Calling” and 2004’s “The Mesmerist,” which cobbles a whole new fantasist narrative out of the film. The social conscience of unearthing and preserving the past comes to the forefront in “The Miners’ Hymns” from 2011 and 2013’s “The Great Flood,” two assemblies of old footage that play like combinations of conventional documentaries and cinematic poems. “Hymns,” culled from material provided by the British Film Institute, shows the painful history of North England mining towns from the 1950s on, with a special emphasis on the faces from the past that is replete in the footage. “The Great Flood,” concerning the Mississippi Flood of 1927, combines jaw-dropping disaster footage with trenchant montages, including a flash-forward trip through a vintage Sears-Roebuck mail-order catalog ending with bargains for grave markers.

Everything in this set is innovative and intriguing but some of it doesn’t work as well as the sublime pieces I’ve cited. All of these movies feature music by top-flight players and composers, including Bill Frissell, Vijay Iyer, and Johann Johannson. Several feature not just music but words set to music, and while the libretti of the soundtracks to “Before I Enter” and  “Porch” are at a level of achievement commensurate with the music, the words impart a literalism to Morrison’s images that’s a bit distracting. There’s too much going on at once. I also have a minor technical quibble. A couple of Morrison’s films, for instance “Outerborough,” which captures an elevated train’s journey as captured from both the front car and the rear, use split-screen imagery. This could have filled a 16:9 frame, but here Icarus chooses to present the image windowboxed within smaller 4:3 dimensions. The same applies to the film “Release.” It’s hardly a deal-breaker on this wonderful set but it did strike me as a curious choice. That said, Morrison’s world is one of the most breathtaking and haltingly disturbing cinematic realms of our time, and this set is a fantastic way to explore it.