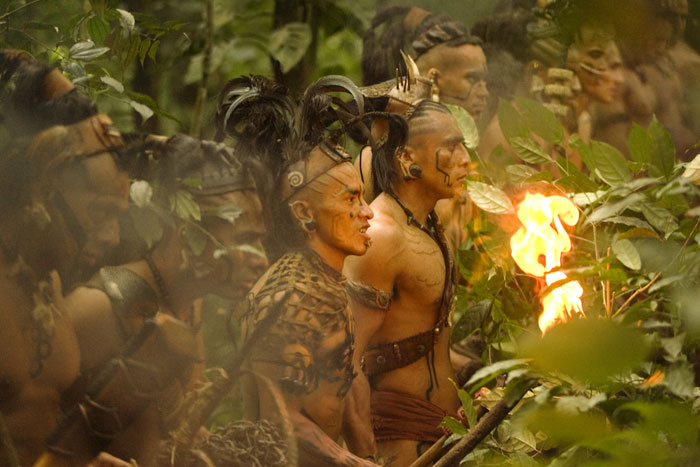 I don't think much of Mel Gibson's ultra-literalist directorial sensibility (my main problem with "The Passion of the Christ" is that it failed to engage on any symbolic, religious or mythological level), but this piece in the New York Times last week, by archaeologist Craig Childs, piqued my interest in seeing "Apocalypto." Childs sees it as a truer reflection of the historically violent -- and symbolically violent -- nature of Native American tribal life than the popular stereotype of American Indians as passive, stoic, peace-loving peoples. (And that stereotype developed, in part, as a corrective response to the savage portrayals of "Injuns" in so many American movie westerns).

Writes Childs (author of the forthcoming book, “House of Rain: Tracking a Vanished Civilization Across the American Southwest”):

Being told by screenwriters and archaeologists that their ancestors engaged in death cults tends to make many Native Americans uneasy. In Arizona, Hopi elders turn their eyes to the ground when they hear about their own past stained with overt brutality. The name Hopi means people of peace, which is what they strive to be. Meanwhile, excavators keep digging up evidence of cannibalism and ritualized violence among their ancestors.

How do we rectify the age-old perception of noble and peaceful native America with the reality that at times violence was coordinated on a scale never before witnessed by humanity? The answer is simple. We don’t.

Prior to 1492 it was a complex cultural landscape with civilization ebbing and flowing, the spaces in between traversed by ancient lineages of hunters and gatherers. To the religious core of pre-Columbian Mayans, a beating heart ripped from someone’s chest was a thing of supreme sacredness and not prosaic violence.

If “Apocalypto” has a fault, it is not with its brutality, but with us in the audience who cringe, thinking the Mayans little more than a barbaric people. The fault lies in our misunderstanding of a complicated history, thinking we can lump a whole civilization into a single response and walk out of the movie saying, “That was disgusting.”