"What's bad for GM is good for America!" 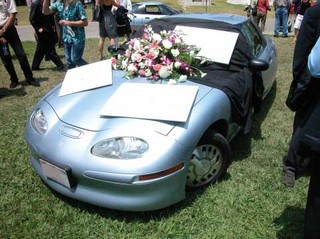 That's what I wrote, semi-earnestly, in a June 2006 post about the documentary "Who Killed the Electric Car?" I led up to it with this:

Had GM committed to the electric car, it might be on top of the world today. Instead, GM's boneheaded short-term business decisions have nearly bankrupted the company. And now, why in the world would anyone want to buy an GM vehicle, when you know they're passing off inferior, antiquated merchandise? Unless it can compete, and catch up technologically to where it already was ten years ago, GM deserves a quick and merciless death.

Two and a half years later, my feelings are a lot more ambivalent -- mainly because I don't want to see more people out of work in this freezing economic climate, unless they're the CEOs who steadily ran the American automobile industry into the ground over the last, oh, thirty years. (They learned nothing from the 1970s, when they found themselves making cars Americans didn't want and handed the market to Toyota, Honda, Mazda...?) As Thomas Friedman put it:

Over the years, Detroit bosses kept repeating: "We have to make the cars people want." That's why they're in trouble. Their job is to make the cars people don't know they want but will buy like crazy when they see them. I would have been happy with my Sony Walkman had Apple not invented the iPod. Now I can't live without my iPod. I didn't know I wanted it, but Apple did. Same with my Toyota hybrid.

That's exactly it. (You'll notice, too, that the big paradigm-changing movies are almost always the ones nobody wanted to make for years. Then, once they're successful, everybody wants to make them again and again. What do you think would be the reaction if the major studios started asking for government bailouts?)

Nicholas Kristof says that, although "there are plenty of sound arguments against a bailout" for GM and Chrysler, "there's a practical argument that trumps everything: when conditions are so fragile, we can't risk a staggering blow to the national economy."

Meanwhile, yet another New York Times op-ed columnist (though, I hope, not for much longer), William Kristol quotes a Washington Post column alleging "class bias" as the basis for another incoherent column headlined "Left and Right Piling On" (so as to appear "fair and balanced"):

What's more, in their disdain for the American auto companies, the left and right wings of the establishment agree. Of course, the particular foci of criticism are different -- the left berates the auto companies' management, the right the United Automobile Workers. But even on the left, while Democratic politicians still try to look out for the interests of the U.A.W., there's not really that much sympathy for the workers. The ascendant environmentalists disdain (to say the least) the internal combustion engine and everyone associated with it. Most of today's limousine liberals are embarrassed by their political alliance with the workers who built those limousines.

Yes, as with Iraq and everything else, Kristol just makes it up as he goes along. I expect his next column will be about how everyone in Hollywood is blaming the failure of "Speed Racer" on the gaffers. After all, they're the ones who decide what movies to make, how to make them, and what to spend on them, right?