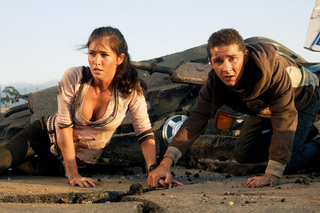 Of course, critics can only choose the best or worst of a given year from among the movies we've actually seen. I'm fortunate that I get to avoid most of the plain-old, garden-variety bad movies these days ("Old Dogs," "All About Steve," "G.I. Joe"). Something really has to be Monumentally Misconceived for me to consider it "the worst" -- which usually means there's a considerable amount of misapplied talent on display. So, I've managed to see only three of the movies on the consensus worst-list in the Vulture Critics' Poll. (Guess which three?) Was the #1 choice too obvious? See the whole "Bottom 11" after the jump. Individual critics' ballots and comments here.

Go ahead: If you had to choose the most memorably bad movie you saw in 2009, why would you choose it below all others? Because it's a poorly made movie, not unlike hundreds of other bad movies you've seen? Because it's a huge waste of resources? Because it's a moral and artistic abomination, an insult to anyone who cares about film or life itself? Explain.

Next Article: Irreversible: Will he see it or will he pass? Previous Article: Hitler on Leno

Irreversible: Will he see it or will he pass?