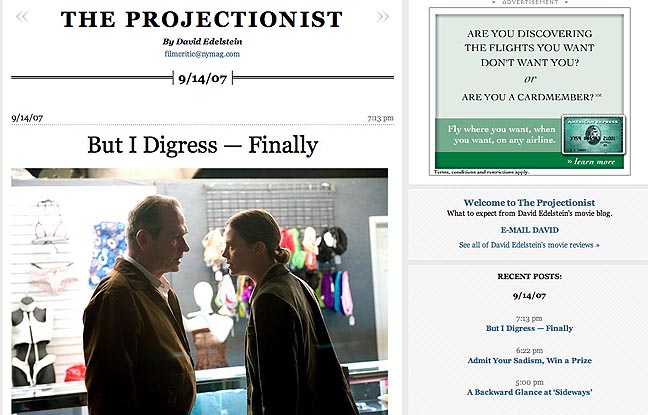 The inaugural edition of The Projectionist.

David Edelstein, one of my favorite early "movie bloggers" (when he was at Slate he hosted the annual Slate Movie Club, an e-mail conversation between critics) has returned to the, uh, "interactive" world. David Edelstein, now at New York Magazine, has launched a blog under its auspices (or, at least, root URL) called "The Projectionist."

Oh, sure, I "disagree" with him plenty (and sometimes just his tone), but as anyone who visits Scanners knows, I read critics for their writing styles and insights, not for their opinions, and Edelstein's is a valuable voice. I'm especially glad to see him returning to writing specifically for the web, and not just within the provincial confines of NYM (although the mag has a web site too, of course). But today, the World Wide Internets is the only forum that really matters, and if you're not participating on that level you may as well be doing cave paintings -- even if they're in midtown Manhattan.

Edelstein outlines his reasons for blogging in one of his initial posts:

And so I welcome you to my occasional blog, the Projectionist, a place for second thoughts, third thoughts, musings both important and self-indulgent, and — I hope — a fluid exchange with readers.

I’ve missed that here at New York. In my nine and a half years at the online magazine Slate, I got thousands of e-mails from readers. That last one I got here was two months ago. It’s not, I’m convinced, that I’m that much less read. It’s that the distance, literal and existential, between a glossy weekly print mag and cyberspace is vast. I send e-mails to bloggers and online writers often but can’t remember the last time I mailed someone at a glossy, even when I’ve read an article online. My fingers aren’t poised over the keyboard in the same way.

Cyberspace being infinite, at Slate I had license to write between 250 and 2,500 words on a movie, and no digression was too digressive. Now, there’s the horror, the horror of eliminating whole paragraphs to fit the page — in addition to changing, for example, “did not” to “didn’t” to pick up a line and removing anything in parentheses. I do not always want to use contractions, and I like parentheses. You never know where they might lead.

Here's to digressions, the spice of life! Follow more of Edelstein's here -- regarding the use of color in "The Valley of Elah" (or maybe one particular print of it), a cinematic sadism contest, and a look back at "Sideways."

P.S. Please note my inability to use words such as "disagree" and "interactive" without some hesitation, above. Both have been overused beyond the point of meaninglessness -- and the former so grossly that simply stating disagreement is now considered a logical counter-argument. "Oh, I disagree," is no longer the beginning of a discussion but, for many, the substitute for a discussion.