We could shoot a Russian unicorn

"I got a porcupine called 'Zazoom' He leaves his scent on people's graves." -- "Russian Unicorn"

You know the Kuleshov Effect, illustrated by the famous Soviet montage experiment in which an actor's performance seems to change, depending on whatever image (a bowl of soup, a child in a casket, a beautiful woman) appears before identical footage of his face in close-up. Performances in the movies only begin with what the actor does on the set. They are created and re-created every step of the way, from editing to final sound design and mixing (effects, looping, punching, music, etc.). There's also what I would propose we call the "Russian Unicorn Effect," after the amazing music video parody by Bad Lip Reading.

OK, it's already kind of got a name -- the McGurk effect -- and it was "discovered" in 1976 by cognitive psychologist Harry McGurk and his research assistant John MacDonald -- and it explains how sounds can change perceptions of images and vice-versa.

I saw and heard the parody above ("Russian Unicorn") a few months ago, which led me to check out the original Michael Bublé video ("Haven't Met You Yet"), below. I could not believe the difference. Try it yourself -- first the parody, then the original here (embedding disabled, unfortunately).

(Incidentally, Bublé, a Canadian pop singer, says the Bad Lip Reading clip is "One of the coolest things I've ever seen. I was really proud to be a part of it -- even though I had nothing to do with it.")

The BLR version is a semi-raunchy absurdist electro-pop anthem with hip-hop inflections:

Oh, oh, the night is young now baby We could shoot a Russian unicorn We'll probably do it on the couch While my roomie's out hiking So take if off and bite your tongue And hope my roommate don't come home

The Bublé tune could have been a hit in the 1970s for Barry Manilow or the Captain and Tenille. The above lyrics roughly correspond to these in the original:

And I know someday that it'll all turn out You'll make me work so we can work to work it out And I promise you, kid, that I give so much more than I get I just haven't met you yet

The anonymous BLR, according to an interview he did with Rolling Stone, is a...

"late-20s-ish" music and video producer from Texas -- "It's a one-man show; it's just me" -- whose introduction to lip reading was personal. BLR's mother, herself a musician, went profoundly deaf in her 40's: "She went from having perfect hearing to having no hearing in just a matter of months, and the doctors never figured out why." BLR marveled at the way his mom, of necessity, became an expert lip reader. He would sometimes sit around at night, watching TV with the sound off trying to pick up the skill himself.

McGurk research has also been used to improve lip-reading, speech-recognition and language-teaching methods (and let's not forget Cee Lo Green's "Forget You"), but I think the most remarkable contrast in these two videos is how wildly different Bublé's performances are -- even though it's really the same performance, lip-synched to different music. I had to go back and forth to figure out when he snarled (or farted) in the "Haven't Met You Yet" video -- or when he went all white boy hand signals. But, really, he didn't. What seems to be a partial smile in the original only becomes a snarl in the BLR version. 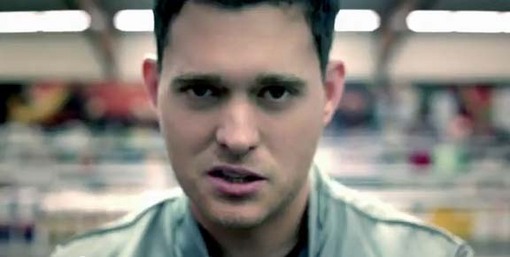 We're used to complaining when movie music seems to be too heavily underscoring performances or highlighting emotions. But maybe, when it's done effectively, we don't even notice that the music (or the sound effects or the dialog) are actually creating the performance -- transforming it into something quite different than what the actor did in front of the camera. Just another reminder of how incredibly malleable moving pictures, and our perceptions of them, really are.

P.S. Because I saw the BLR version first, I can't help but hear a line in the original as "And peein' in your life is gonna change me..." 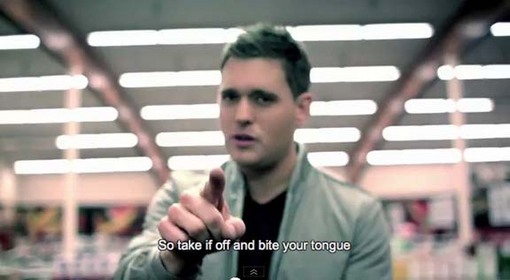 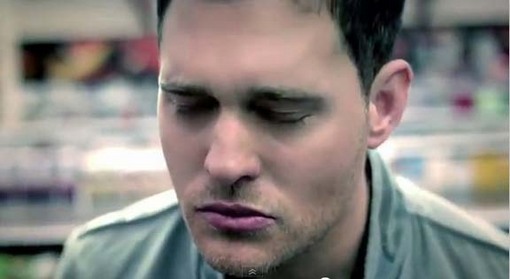 "This is what happens when you meet a stranger in the Alps!"