Wal-Mart and the Priory of Lyin' 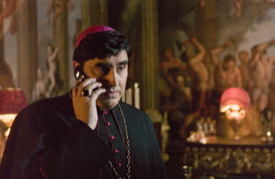 "Wal-Mart? I'd like to order another copy of 'The Da Vinci Code.'" Alfred Molina plays Cardinal Fang a bishop with a cell.

The protests against "The Da Vinci Code" are expected to reach their peak this opening weekend. And in reading some of the reactions to the movie and the book (see here), I noticed that much of the heat seems to center around whether people will mistake the book's and movie's fictions for historical realities. You'd think the general public would be smart enough to understand what a novel is, and that such books are different from scholarly works of nonfiction, even when they incorporate actual facts or events.

For example, one of my all-time favorite novels is Joseph Heller's "Catch-22" and it is about a bomber squadron based on the Mediterranean island of Pianosa during World War II, but to my knowledge the titular rule has never been part of U.S. Air Force regulations, nor did Clevinger actually pilot a plane into a cloud and not come out the other side. In part, that is because Clevinger, like Robert Langdon (the hero of "The Da Vinci Code" and Dan Brown's previous novel, "Angels and Demons"), is a fictional character. World War II and the U.S. Air Force and Pianosa, however, are real. And so is the Mediterranean.

Anyway, I was surprised to find that Wal-Mart is (still) selling "The Da Vinci Code" on its web site with this false and misleading description:

... Langdon learns the late curator was the gatekeeper of the Priory of Sion -- an actual secret society whose members included Sir Isaac Newton, botticelli, Victor Hugo, and Da Vinci -- and has sacrificed his life to protect the Priory's most sacred trust: the location of a vastly important religious relic hidden for centuries. It appears that Opus Dei, a clandestine, malevolent, Vatican-sanctioned religious sect that has long plotted to seize the Priory's secret, has now made its move. Unless Langdon and Neveu can crack the Da Vinci code and quickly assemble the pieces of the puzzle, the Priory's secret -- and a stunning historical truth -- will be lost forever.

Truth is, the Priory of Sion is a well-known hoax that wasn't even created until 1956, which was a little after Leonardo's time. In case you missed the recent "60 Minutes" debunking of the Priory of Scion (how much more public can you get?), you can read a history of the hoax at Answers.com.

I mention this for two reasons:

1) You may recall that Wal-Mart has gotten into some trouble for this kind of thing before. In 2004, it was found to be selling the anti-Semitic hoax "The Protocols of the Elders of Zion" on its web site, with a description that, according to a letter to Wal-Mart president and CEO H. Lee Scott, Jr., from the National Director of the Jewish Anti-Defamation League, "suggests it may not be a forgery":

In fact, there is no question that the Protocols is a forgery, created by a Czarist official in the early 20th century to promote the conspiracy theory that Jews are plotting to control the world. Historians, jurists and other authorities have publicly attested to its fraudulence....

ADL is not in the business of banning books, no matter how reprehensible they may be. While Wal-Mart has discretion in what books it chooses to sell, it owes it to its customers to unequivocally state the nature of the book and to disassociate itself from any endorsement of it.

In this instance, Wal-Mart made "business decision" to stop selling the book. But now they're misrepresenting the factual accuracy of another book critical of a major religious group, in this case Roman Catholicism (and, by extension, all of Christianity).

2) Other major online booksellers do not misrepresent "The Da Vinci Code" on their sites the way Wal-Mart's unattributed description does. The Amazon.com "editorial review" by Jeremy Pugh notes that "some will quibble with the veracity of Brown's conjectures." And the Publisher's Weekly review describes the Priory of Scion as "legendary," concluding the author "has assembled a whopper of a plot that will please both conspiracy buffs and thriller addicts."

At BarnesandNoble.com, the brief "From Our Editors" review simply sketches the novel's set-up, but the first review excerpt (from Patrick Anderson of the Washington Post) says:

Whatever the reader makes of the religious theories put forth, Brown has a great deal of interest to say about the early days of Christianity, the influence of pagan religions on it and the legend of the Grail. He says the revelations about Jesus — not to be revealed here — have been whispered about for centuries, but have never overcome the opposition of organized Christianity. How much of this is fact and how much is fiction? Read the book and make up your own mind.

So, what is Wal-Mart trying to sell?
Advertisement