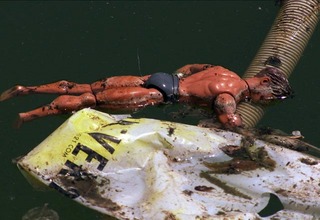 "American Casino" may be mis-titled in some respects because although it acknowledges the casino-gambling principles behind the world financial meltdown that have been obvious and undeniable for many years, the most revealing facet this very fine "Frontline"-style documentary is how it portrays rabid entrepreneurialism spreading through American culture like a fatal self-replicating virus. The widespread damage -- not just financial, but physical and emotional -- is devastating, and the majority of victims in the United States are mainly the middle- and under-class. "American Casino" shows us a nationwide Hurricane Katrina, with similar political causes and consequences, that has decimated lives and property -- and was entirely man-made.

Without pushing the metaphors too far, the movie (directed by Leslie Cockburn and included in VIFF's "Follow the Money" series), traces the very real connections between the endlessly multiplying and dividing derivatives that caused the crash to the wrecked dreams and deteriorating real estate that now blight both urban and suburban areas from Baltimore to California. While people in offices were using computers to calculate "fourth-dimensional" Ponzi schemes that defied human comprehension, others were being evicted from their homes.

"Financial instruments" known as CDO-squared and CDO-cubed (Collateralized Debt Obligations) kept chopping up asset-based loans (mortgages) into exponentially smaller bits -- derivatives of derivatives of derivatives -- allowing them to be sold and re-sold with the seller taking a fee on each transaction. Meanwhile, mortgage companies under pressure to feed more transactions into the system (they made their money by taking fees off the top, too) would do whatever it takes to design phonebook-sized mortgage documents that nobody had actually read. If the numbers showed the applicant didn't make enough to qualify, the loan officers would simply adjust the income upward to fit the guidelines, often without even telling the applicant. The mission was to get the loans approved and get signatures on the documents. The mortgage companies weren't responsible if the "homeowner" suddenly found that the payments were half again as much as they'd been told and had to default. It was a challenge to even find a financial entity to which mortgage payments were being credited, because so little of a homebuyer's monthly check was going to any individual bank. Once the buyer defaulted, the house could be repossessed and re-sold to some other sucker who didn't yet understand that, in the long run, the house always wins. 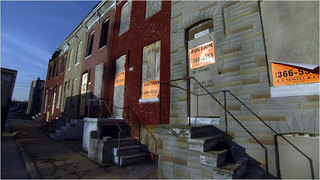 The result in cities like Baltimore is that neighborhoods are being decimated by empty run-down houses, fire hazards and rodent havens that drive down property values for everyone and provide a breeding ground for crime and pestilence. What better location for a meth lab, a weapons cache or a rats' nest than an abandoned house? Entrepreneurial squatters take over a residence, risk burning it down by heating it with an open gas oven, and then rent rooms to other homeless "tenants" -- doing exactly the same thing with real property as the financiers were doing on paper: making money off the poor by selling them assets they don't actually own.

In Riverside County, California, the film finds another fresh hell: acres of foreclosed and abandoned tract houses with stagnant, junk-filled swimming pools in back. These pools have become havens for millions of mosquito larvae (an estimated 800,000 or more per pool), which carry West Nile Virus. Once a person is infected, the virus replicates not unlike the derivatives that indirectly spawned them, causing brain-swelling and, eventually, death. When unchecked self-benefit becomes the only principle of one's existence, that's the inevitable result. But by killing the host, the virus also deprives itself of a vector...