The tong hackman is a little orange-blonde tattooed biker, most often dressed in a pair of black shorts, sandals that match his hair, and nothing else. He picks up a girl who has split with her motorcycle-riding boyfriend and becomes the Poutiest Girl in the World. They shack up on his father's land in a one-bed structure covered with a clear plastic tarp. She throws tantrums and torments him. There is a lot of drinking, smoking, fishing and cell phoning. He attacks his business with methodical professionalism, hacking and beating those who can't pay their debts to his boss. A gang of others arrive with machetes to take their revenge. Things get hot, and the boss tells him to get out of town to Guangzhou and hide out for a while. But what about the girl?

That's a basically accurate plot description of Yang Heng's "Sun Spots," a striking Chinese film that received its world premiere here at the Vancouver International Film Festival. But now let me come at it from another direction entirely....

"Sun Spots" consists of 31 static shots, nearly all of them full shots or long shots, deep-focus exteriors in which the often spectacular view stretches far into the distance. Roads, rivers, bridges, paths run through them. Because the camera does not move and all the scenes play out in full-figure tableaux, the compositions are not re-composed (into medium shots, reversals, close-ups, etc.), as they often are in films where the blocking of the camera and the actors is more intricate. The suspense of watching the film comes not so much from what will "happen" next as what other elements will enter or exit the frame on the aforementioned paths that extend offscreen, and how the shot will end. Neither of the main characters speaks. Indeed, all the film's dialog could probably fit onto a single Twitter page. 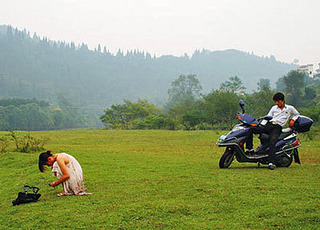 As David Bordwell (with whom I saw the movie) writes: "We have been here before. After twenty years of masterpieces by Hou, Kore-eda ("Maborosi"), and Jia Zhangke ("Platform"), this style [of Asian minimalism] risks mannerism." And yet, in crystalline focus on a big screen, the film is a mesmerizing. I was feeling a little sleepy during the previous picture, Hirokazu Kore-Eda's alternately saccharine and disturbing "Air Doll," but I was rapt throughout "Sun Spots," as though I never even blinked. Even when your mind drifts, watching a man crouching and smoking beside a river, there's so much to notice. Like: When did that bundle of sticks float into the frame? Will he notice it, too? What will he do when he does?

Sometimes, as in the shot I've just described, there's an unexpected payoff. Other times, the shot just ends inconclusively -- or seems to, until the consequences of something that happened in or out of the frame (or between shots) are referenced in the next one. You begin to detect patterns -- lines of communication (roads, phones, eye contact) that the characters use or don't use, that allow them to connect or prevent them from connecting....

What is the film "about"? (It's about 112 minutes, that's what!) Perhaps it's about the vastness of the landscape and the smallness of the humans inhabiting it. Perhaps it's about watching -- and watching movies, how we put "stories" together shot by shot, piece by piece. In a chronological narrative one image prepares us for the next, which elaborates on the previous image, and so on. By slowing the process way down, we become acutely conscious of how the film does that, and how we participate by asking questions, anticipating events, drawing connections, reading body language...

¹ If you include the titles as the second shot, it's 32. David Bordwell estimates that the Average Shot Length of "Sun Spots" is roughly 3.5 minutes, or about 205 seconds (the final shot is around nine minutes). For perspective: The average number of shots in contemporary American movies is about 1,000-1,200, with an ASL of somewhere between 3 and 6 seconds. (It varies by genre, of course. Action films tend to have more, and shorter, shots overall.) DB also reports that among the films with longer ASLs he has seen this year are "Inglourious Basterds" (roughly 6 seconds) and "Goodbye Solo" (roughly 12.5).