VIFF #1: The "normal" pedophile nobody notices

I wasn't sure how much I was going to be able to take of Markus Schleinzer's "Michael" (2011) at first, given that it begins as the "Jeanne Dielman" of Austrian kidnapper-pedophile movies. Fortunately, once the opening title appears on the screen it gets better. What I mean is, the movie starts by plunging us into the middle of a horrifying reality and treating it as mundane, reflecting the attitude of the title character (Michael Fuith), an insurance bureaucrat and sexual predator who keeps a 10-year-old boy (David Rauchenberger) locked in the basement of his nondescript, steel-security-shuttered suburban home. 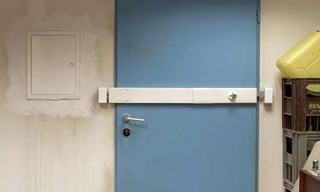 We have no idea how long this has been going on. All the more horrifying, we soon see, is that for Michael it's all quite "normal," like any other family. He treats the boy as if he were his (cold, rigid, distant -- then impetuously playful) father -- sitting down with him for dinner, doing dishes with him side by side, taking him on outings to a petting zoo, decorating the Christmas tree, working with him on a jigsaw puzzle -- except that he also regularly rapes him, while keeping him imprisoned in a soundproofed, vault-like underground room which is otherwise decorated and stocked with toys like any other middle-class child's bedroom. 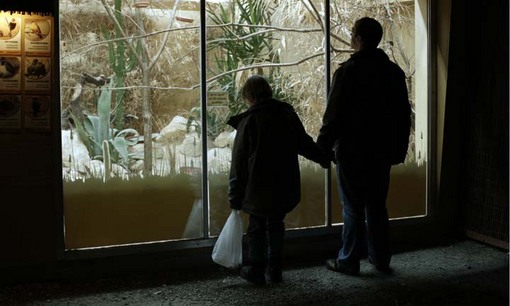 Maybe that's the most disturbing aspect of the film: It's not just that, beneath his flat affect, Michael is a sex criminal and a psychopath (he's a dull, mousy little man, which allows him to hide in plain sight); it's that, the sexual abuse aside, he's not all that much different from millions of other parents all over the world who, day in and day out, unthinkingly and unfeelingly treat their kids like chattel. Did I mention that writer-director Schleinzer is a former casting director for fellow Austrian aueteur Michael Haneke? Yeah, he is. You will find no sympathy for the devil here -- just icy, clear-eyed observational detachment. 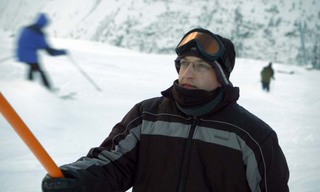 Framings are medium-close (Michael doesn't get that close to other people; he must keep them at arm's length) and tightly controlled. But every once in a while Michael attempts to break out of his routine and do "regular guy" things like, say, going skiing with a couple buddies (though he still tends to keep to himself, and they treat him like a familiar stranger). Chilling and absurdly funny shot: snow-white slope full of skiers; Michael makes his way down, methodically zig-zagging until he passes by the camera and glides out of frame. Introduced to a barmaid by his skiing companions (are they setting this up?), Michael is turned on by her talk of her young son, which leads to a painfully awkward attempt at rear-entry intercourse. (Language used advisedly; it's almost clinical.)

Oddly, just before I came to Vancouver I watched the documentary, "Alfred Hitchcock and the Making of Psycho," which detailed how the director labored to transfer the audience's ambivalent sympathies for the shower-slaughtered Marion Crane to the mother-hen-pecked son and motel manager Norman Bates, who finds himself in the position of having to clean up after his mother's mess. There's none of that in "Michael" -- not a bit of audience-implicating fear and suspense that he might slip up and get caught, just the fervent hope that he will. Perhaps that's in part because we have not witnessed the original crime. The imprisonment and rapes (the latter unshown) are already routine when the picture begins.

There is a strangely ambivalent moment, however, when Michael goes to an Austrian Ikea-like store and brings home a bunkbed for the boy. His plan: to kidnap another to keep him company. (Or is he looking for an eventual replacement? We don't know for sure.) Michael befriends a kid at a go-cart racetrack and woos him with talk of toys that he has at home... and there was a part of me that felt so awful for the lonely boy in Michael's lockup that I wanted him to have a friend. I imagined that the two of them would have a better chance of escape than the one boy alone. The movie slyly accommodates these sorts of stray thoughts by not showing us the panicked, grieving parents (Michael himself can't even stand to watch a TV news subject on the subject of families of missing kids who seek "closure"). Instead, we're reminded indirectly, through flyers for a lost cat.

"Michael" ends at the precise moment this particular story is over. And yet a whole other feature could begin about a minute or two earlier...