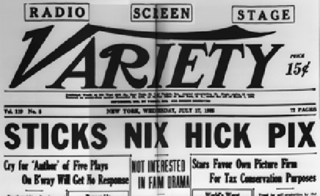 What does Variety -- once known as "The Showbiz Bible" -- think it has to offer its readers? After Monday's news that the paper has jettisoned (what's the reverse of "ankled"? I forget...) veteran film critic Todd McCarthy, whose name was synonymous with Variety even before the publication's reviews had actual bylines, I don't see much future in the once-essential trade paper. Lay off the people who are your reputation, your authority, your influence, and what's left? Nothing. There will still be a batch of web and paper pages legally entitled to call itself "Variety," but so what? It's like one of those bands that tours under a once-famous name without actually offering the work of any of the names that made it what it was.

How much is that worth to you right now?

Sure, Variety can regress to the days when its reviewers were unknown (and this isn't to knock the many stringers who cover screenings and events all over the world), but now that anyone with press credentials can write about these things instantly on the web, what's so special about Variety's coverage? Again: Nothing.

Of course this is a cost-cutting measure -- made, incredibly, just as the web site is planning to put most of its content behind a fee wall. So they're asking people to pay for... what? A byline isn't just some random name. Decades of experience and expertise stand behind the name "Todd McCarthy." Anybody can write as "Martha Thoddycc" (hey-- it's the same letters as "Todd McCarthy") but they're not going to raise the same expectations, or be able to deliver the same thing.

Variety can't afford them, as they couldn't afford me or editors Michael Speier and Kathy Lyford. But I was a relative newbie, a columnist/blogger. I was a luxury. Problem is, I was well-paid, as were McCarthy and Rooney. Nonetheless, they are necessities. Without them, Variety is doomed.

Variety was once a major-league franchise, but no longer. It is re-positioning itself as a farm team, staffed -- or, I'm sorry, freelanced -- by talented or not-so-talented unknown up-and-comers who will leave or be let go once they weigh too heavily on the bottom line. These writers may go on to careers in the major leagues, but Variety itself is determined to stay put in the minors.

I was one of many who re-tweeted this ignorant, myopic internal memo to the Editorial Staff from editor Tim M. Gray, in which he states: "Today's changes won't be noticed by readers." If that's true, then "New, No-Name-O Brand" Variety deserves all the readers it can hang onto.

We are not changing our review policy. Last year we ran more than 1,200 film reviews. No other news outlet comes even close, and we will continue to be the leader in numbers and quality. It doesn't make economic sense to have full-time reviewers, but Todd, Derek and Rooney have been asked to continue as freelancers.

That's right. We've seen this happen all over the place, from John Hartl at the Seattle Times to David Ansen at Newsweek: "C'mon, guys, your reputations aren't worth salaries. Let us appropriate 'em for freelance rates." What's the "value add" (ahem) of a name, a reputation, expertise? The problem isn't just a matter of costs versus revenues, it's that these companies don't know how to (aggh! choke!) monetize their assets. They don't even know an asset when they're sitting on one.

All such publications deserve to go to hell.

ADDENDUM: I don't think the issue here is (again) about the "death of film criticism" or anything like that. This story raises questions about the value of trade papers (and, specifically, consumer-report reviewing aimed at those inside the industry -- exhibitors, distributors, marketers -- rather than the "end-user"). And, of course, it reflects the truth of what's happening in all businesses in an economy based on freelancers rather than salaried staff. The concept of "brand loyalty" no longer exists, for consumers or for employees; there are only short-term financial expediencies. All workers are disposable temps. Except, of course, for the irreplaceable geniuses in the executive suites.

The only reason anyone pays much attention to Variety, critically, is not because Todd is the greatest critic in the world... but because studios, steeped in The Past, have continued to allow Variety to act as though they have a unique position in the industry and to review first. That has drawn much of the traffic they have had. And Variety - and Todd McCarthy - have held onto that long antiquated idea of how to handle review embargoes closely to their hearts. It has been their lifeblood, however absurd on its face, as "the trades" have been published on the newswires and as consumer content on the search engines for years.

So how, having fired McCarthy, slashing the number of reviews in the paper and online, and going all-freelance with reviews, how could any studio continue to allow Variety to own a space that it does not earn and for which it now shows clear contempt?

Variety will not go out of business. But it will be a brand, eventually sold off, still trying to figure out how to balance print and online in a way that gives the title any distinction at all in the marketplace. Same with The Hollywood Reporter. As such, the title may someday disappear completely. We'll see.

Later; Poland on The Memo:

Wrong. People who read Variety tend to really know the landscape of Variety. When a little-used critic reviews a big movie, we all notice the byline. They underestimate the intelligence and knowledge of a crowd of insiders.

You are just making it harder for even one critic who works for the self-proclaimed largest producer of reviews in the industry to pay for their health insurance and other benefits. You are just assuming - and this is not that new - that the Variety name attached to a review makes it more important. You are wrong. Todd McCarthy was never the only Variety critic that mattered, but a reader's relationship with criticism is a relationship with how a critic thinks. Instead, Variety's policy is now, "best person we can find who is available, hopefully near the festival, and will write a review for $100 - $200."

He knows everybody. He is known throughout the film world. He was Variety's ambassador at film festivals, always the best-known Variety person there. He stood for Variety. We now discover it did not stand from him. [...]

About Todd McCarthy I am not very worried. He's one of a kind. I can think of no better candidate as the director of a major film festival. Or as a professor, or of course as a film critic. What I lament is the carelessness with which his 31 years of dedication were discarded. Oh, the paper cites its reasons. "It's economic reality," Variety President Neil Stiles said of the move. Some "downsizing" is necessary cost-cutting. Some symbolizes the abandonment of a mission. If Variety no longer requires its chief film critic, it no longer requires me as a reader.