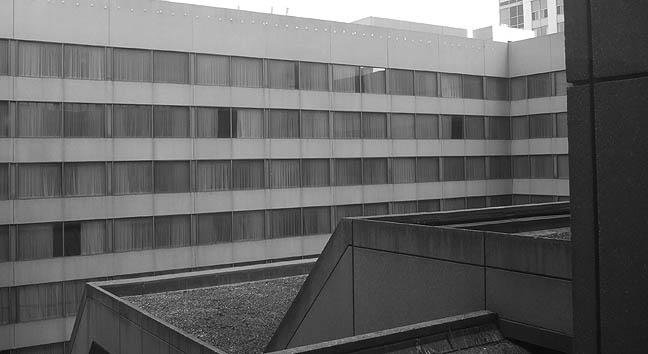 An image from the lost masterpiece by Michelangelo Antonioni, a surprise unveiling at the Toronto Film Festival. Oh, no: It's just the interior view from my hotel room on Bloor Street. Sorry. (photo by me)

Here's what happened: The 2007 Toronto International Film Festival started tonight. I got here last night. But let me back up a little. Seconds before getting into the car to head to SEA for my flight to YYZ (that's Toronto Pearson Intenational Airport), I realized I'd forgotten some dog bones that I left in a bag on my porch. Not for my trip, for my dogs. Who are staying with my mom, who was gracious enough to give me a ride to the airport because she loves me and because she said she'd be up at 5 a.m. on a Wednesday anyway. So I quickly ran back to fetch the pressed rawhide nuggets of chewable deliciousness. The moment I sprung off to fetch I felt the most searing pain in my left calf.

It felt like a Charley Horse -- but, fortunately, it was only excruciating when I tried to use it. Sitting or standing was fine. It only hurt when I walk. Long story short: Five hours of aviation-enforced immobility later (plenty of time to stiffen up real good), I hobbled, drenched with sweat, lugging my bags through a new (and seemingly endless) Torontonian concourse, filled with dread. (And did I mention pain?) There's lots of walking to be done at TIFF, even when you're staying close to the center of the action. Fortunately, I was able to get a massage at the hotel health club at the last minute. It didn't fix the problem, but I think it loosened it up a bit.

This morning I awoke to a moment of pulse-pounding suspense. Put some weight on it and... "Mein fuhrer, I can valk!" As Sugarpuss O'Shea put it, "It's as red as the Daily Worker and twice as sore ("Ball of Fire") but I can deal with it. I cannot describe my relief.

I'm still out of it, though. I think my brain circuits have shorted from yesterday's pain and anxiety overload. Today, I went to get some eye drops for an irritated right eye. (Eye drops are film festival essentials, as anyone will tell you.) The nice pharmacist recommended some antibiotic drops, down aisle 3 on the left, in a yellow and red box. I got 'em. Put 'em in my eye. Hurt like hell -- like no other eye drops I have ever experienced. That's because they were ear drops.

It's a good thing I'm spending most of the time, very still, in the dark. Eyes wide open.

Tonight, I made a vow to myself, that I hope you will help me keep. Just for the hell of it: no superlatives in my Toronto coverage, which means giving up some of my favorite crutches ("splendid," "superb," "terrific," "wonderful," "amazing"). Which I try to avoid anyway, but too often fail. It's too easy, especially when you're cinematically overstimulated and writing on deadline. I've seen two terrific movies so far and I could go superlative crazy any second, but I'm going to try not to. Please let me know (and I'm sure you will) if I screw up.

(NOTE: I'm using "superlative" in the looser, colloquial sense -- as in "hyperbole," not just the superlative ["-est"]form.)

Toronto may be the only film festival in the universe where the laminated passes that you have to wear on a strap around your neck have actually gotten smaller. This year, they're wallet-sized. But, you know, who wants to go through all the hassle of removing a card from your wallet, when you can simply flash your pass at one of the World's Friendliest Film Festival Volunteers? (And I mean that last part sincerely.)

Another brilliant innovation this year: bar codes. No longer do the lines for press screenings have to crawl as each and every person signs in with their name and affiliation. Now they just point one of those hand-held scanners at your card and everybody knows what screenings you've attended! I'm not kidding, I think this is genius, and I can't believe I never thought of it before. Next year: Eye-In-the-Sky cams and facial/vocal recognition software, like what Dr. Heywood R. Floyd uses in "2001" (that was six years ago, guys) -- only, of course, much, much faster. No physical passes necessary.

TIFF is cutting-edge. I know they can do it.

OK, next post: Will be about the movies. As usual, Roger Ebert is already way ahead of me. He's already written his THIRD report, which will be published shortly...

Next Article: TIFF 2007: Casa of Horrors Previous Article: Personal note: Off to Toronto!

Personal note: Off to Toronto!