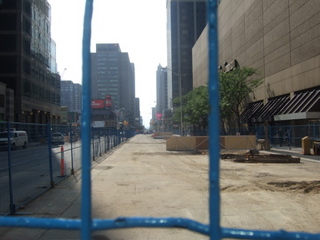 Oh, I have plenty to write about. Some of it even about TIFF, which officially kicks off Thursday. But I have to get up early to get to the first press screenings Wednesday morning. They start, auspiciously, with the new Guy Ritchie film, "RocknRolla," at 9 am. (That's 6 am real time.) So, that means I can sleep in at least until 9:30 or 10. On the other hand, it would be nice to cover some films that probably won't get wider distribution. Ritchie sure fits that bill.

Meanwhile, Bloor Street looks like Gitmo (new construction!) and all Torontonians want to talk about is the governor of Alaska -- either with great concern or great disdain. (The Canadians have been openly laughing at us, nervously, for eight years.)

The movies will surely offer a welcome respite from the horror-comedy of the world at large right now...

Nighty-night. Be seeing you.