"This is my happening and it freaks me out!" 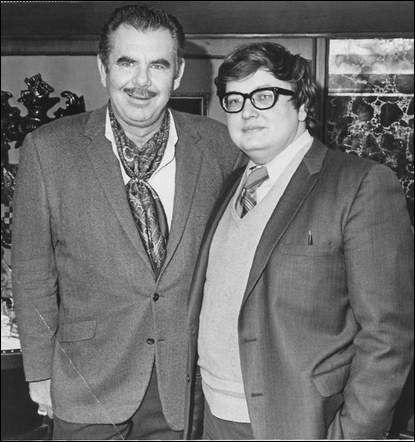 Messrs. Meyer and Ebert at the time of their collaboration.

Yes, "Beyond the Valley of the Dolls" is available on DVD at last. Dennis Cozzalio has a fine assessment of Russ Meyer's busterpiece over at Sergio Leone and the Infield Fly Rule -- and an appreciation of the commentary track by "BVD" screenwriter Roger Ebert, as well:

And now it seems that time, and film critics and film audiences, may finally have caught up with Ebert and Meyer. Last week's DVD release of "Beyond the Valley of the Dolls" (in tandem with the straightforward Mark Robson-directed 1967 adaptation of "Valley of the Dolls") provides a chance to see the candy-colored Panavision psychedelia, the free-associative montage, and the unbridled energy that powers Meyer and Ebert's play(boy/Pent)house sensibility to greater advantage than it has probably ever been seen.

The movie, which truly is no sequel at all to "Valley of the Dolls," takes the previous film's story of sex, drugs and stardom (and the inevitable crash that follows) as its template, adds the crucial element of rock and roll, and uses it to gently (and sometimes not so gently) satirize the whole idea of seeking fame and fortune in Hollywood, not to mention movies about seeking fame and fortune in Hollywood....

Ebert explains that Meyer was, as a director-writer, probably most influenced by the rampant pneumatic exaggeration and corny humor loose in the universe of Al Capp -- in fact, the critic cites Li'l Abner as a direct influence on the only other completed Meyer-Ebert collaboration, "Beneath the Valley of the Ultra-Vixens." But even more than the spirit of Al Capp (which was, in "Ultra-Vixens," mixed-up to great effect with a spirited take on Thornton Wilder as well), Ebert points out several times during the commentary just how old-fashioned and pictorially simple, yet not simpleminded, Meyer's visual grammar is, and he compares it (while terrific examples of what he's saying run past on the screen) and the performances in the film to those of the silent cinema. Ebert doesn't use this evidence -- lap dissolves, contrapuntal imagery existing within the same frame to establish character relationships outside of the narrative, exaggerated movement and very straight line delivery, or even that montage style, which Ebert says positions Meyer in his mind as the logical heir to Sergei Eisenstein -- to somehow inflate Meyer to the status of an Eisenstein or a D.W. Griffith. Instead, he merely points it out to emphasize how enraptured Meyer was by the simplicity of pure storytelling techniques, regardless of whether they were "hip" or not, and leaves us to discover on our own just how much more than single-minded, raucous soft-core pornography Meyer's films could be because of those techniques.

This is really good stuff; you should check out the whole piece. Meanwhile, That Little Round-Headed Boy offers up a swell tribute to "the original riot grrrrls" -- the "BVD" house band, the Carrie Nations:

More important, they rocked, people! One of the greatest '60s song titles ever was the Carries' 'Look On Up to the Bottom,' perfectly Spinal Tap-ish in delineating that fine line between stupid and clever. Then there was the energetic, guitar groover, 'Find It' and my favorite, 'Sweet Talking Candyman,' a sort of Brill Building-meets-Muscle Shoals soul cut, which could have easily been recorded by Dusty Springfield, Bobbie Gentry or comeback-period Elvis.

As Kelly says: "When does any party start? When you get there!"