The Worst Movie of the Decade Relay 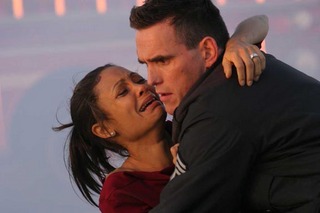 As near as I can tell, this particular discussion got started when Sara Libby wrote a short piece at True/Slant called "Worst Movie of the Decade: 'Crash'." She said:

It's been called a "feel-good" racism movie -- one that leads people to believe they're on the right side of racism, when in fact they're just having their buttons pushed and their preconceived notions re-affirmed. [...]

Bad movies get made all the time. But what infuriated me about "Crash" was that so many people mistook it for something profound when it was truly the opposite. It shouts at the top of its lungs: "I'M SUBTLE! I'M NUANCED!" and so many people somehow agreed.

PostBourgie seconded the nomination, quoting from Libby's piece and adding a few paragraphs of his own, including:

I've complained about this film at length here before, and while I've seen movies that were more poorly made, I've never actively hated a movie as much as "Crash." Its basic premise seems to be that personal animus is the well from which racism springs, and that absolution from racism can be found in being violently forced to relinquish one's bitterness. (Or something.)

Over at The Atlantic, Ta-Nehisi Coates then quoted PostBourgie and elaborated with his own thoughts:

I don't think there's a single human being in "Crash." Instead you have arguments and propaganda violently bumping into each other, impressed with their own quirkiness. ("Hey look, I'm a black carjacker who resents being stereotyped.") But more than a bad film, "Crash," which won an Oscar (!), is the apotheosis of a kind of unthinking, incurious, nihilistic, multiculturalism. To be blunt, nothing tempers my extremism more than watching a fellow liberal exhort the virtues of "Crash."

And if you didn't know that Ta-Nehisi Coates is black, you probably liked "Crash." And if you think his blackness adds credence to his argument that it would not otherwise have had, you definitely liked "Crash."

Anyway, from there Coates' fellow Atlantic blogger Jeffrey Goldberg (a Jew!) quoted him, and added:

I know a lot of white people in L.A. who think that "Crash" represents an accurate depiction of the way blacks and whites relate to each other. These are white people who live in the Hancock Park neighborhood, mainly, though not exclusively.

I have nothing to contribute to that anecdotal assertion. But do you think we could go viral with this?

UPDATE 12/31/09: Want to refresh your memory about "Crash"? Some links and analyses: