The return of 'Bloody Mary' 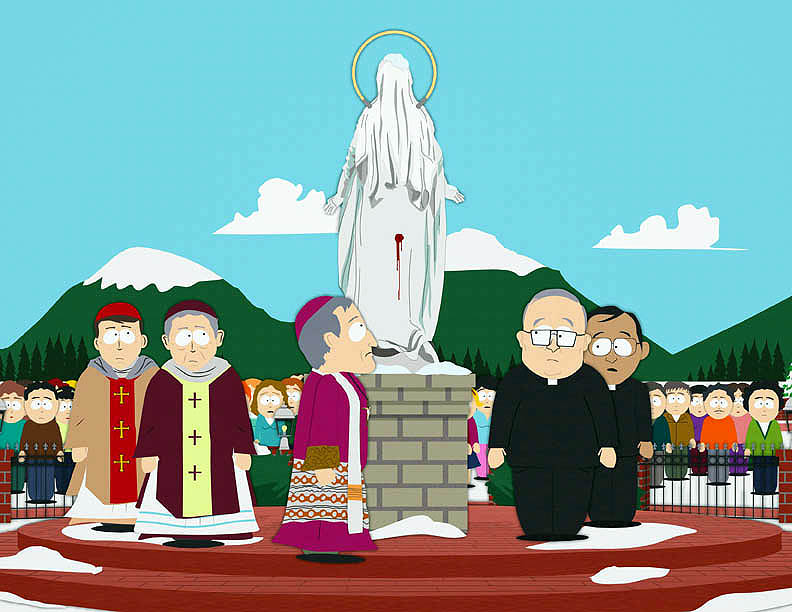 Readers responding to the news that the banned "South Park" episode "Trapped in the Closet" is scheduled (again) for its first repeat showing since November of 2005 have also tipped me off (in Comments -- thanks, DVC) that the "Super Best Friends" episode was rebroadcast this week, and the world failed to end. In this 2001 show, various religious figures (including Jesus, Buddha, Muhammad, Joseph Smith, Krishna, Moses and Lao Tsu) were depicted as superheroes who team up to fight the evil David Blaine, except for Buddha who doesn't believe in evil. According to Wikipedia, it was also repeated in syndication in April 2006 -- despite Comedy Central apparently refusing to show a cartoon depiction of Muhammad in "Cartoon Wars, Part II," which premiered the same month. (Sorry, Danish cartoonists. Next season I would like to see Trey and Matt actually incorporate those Muhammad cartoons into the show: "Cartoon Wars, Part III"?) And the "Bloody Mary" episode, which was withheld from re-airing after protests from the Catholic League (see "Vile 'South Park' Episode Pulled," the League's own take on the matter) is now scheduled for repeat August 2. C'mon folks, this is a show that began as a cartoon Christmas card about Jesus duking it out with Santa. Could the other kind of "market pressures" (i.e., audiences that actually want to see these shows -- and will endure the ads that accompany them as the price of doing so, unless they have DVRs and can zip through them) emerge triumphant at last? Hail, freedom!