The Hollywood studio mentality in one paragraph 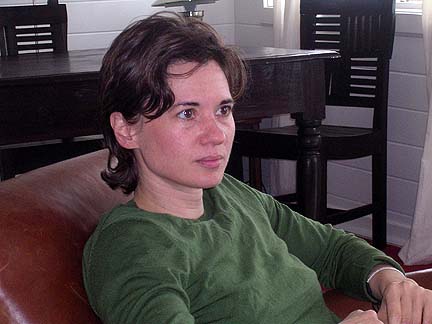 The first time I interviewed Martin Short (one of my "SCTV" idols) in 1987, he told me an anecdote about his experiences in Hollywood. A typical encounter with studio executives would begin with something like, "Wow! We love you! You did this and you did that and we think you're great!" Followed, almost immediately, by, "And now that we've hired you, don't do that stuff anymore because that's not what we want from you. Just do it our way."

Here's director Kimberly Peirce on why nearly ten years elapsed between her last feature, "Boys Don't Cry," and her latest one, "Stop Loss":

... After "Boys Don't Cry," Hollywood came and offered me some very expensive projects, some very good stuff.... I had one project that I got almost to fruition, "Silent Star," about the unsolved murder of [the silent movie director] William Desmond Taylor in the 1920s. It was wonderful - the story of how Hollywood was built on an unsolved murder and a cover-up. We had it cast and ready to go, and the studio ran the numbers and they said, "We want to make it for x amount of money." And I said, Uh, all right. But then they said, "We don't want to spend that much, we want to spend 10 million dollars less." I said, Well, I don't know if that's a good idea, but I'll go ahead and make the adjustments I can. And they said, "Well, we don't want to see the version of the movie that we're prepared to pay for. We want to see the version we're not willing to pay for."

Perfectly circular bureaucratic logic -- so beautiful in its impeccable shape that Franz Kafka and Joseph Heller must be laughing so hard they're crying....