The Greed for Speed 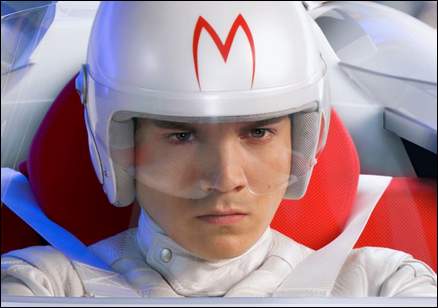 My review of "Speed Racer" by the Wachowski Brothers™ is in the Chicago Sun-Times and on RogerEbert.com. Here's an excerpt:

"Speed Racer" is not a feature film in any conventional sense -- although there is nothing so conventional in today's marketplace as a corporate product based on a campy vintage TV show that is developed for extremely brief exhibition in multiplexes on its way to more appropriate platforms such as DVD and video games, which provide the principal justification for its manufacture in the first place.

Neither is "Speed Racer" a commercial avant-garde film (though fans of the Wachowski brothers may wish to make such claims), unless you still consider Laserium shows of Pink Floyd's "Dark Side of the Moon" to be cutting edge. (Lights! Shapes! Colors! Motion! Money!) And there's nothing terribly adventurous these days about Eisensteinian montage treated as if it were William S. Burroughs' "cut up" technique -- with digital clips randomly scrambled like pixelated confetti.

Nor is it some kind of subversive commodity, unless the outré strategy of pandering to a low-brow, retro-nostalgic crowd can be considered anything but business as usual in 2008. The faux naivete on display here -- right down to the imitation-fruit-flavored FDA-food-dye coloring -- is both shamelessly quaint and shamelessly cynical.