The film habits of Homo Portlandia 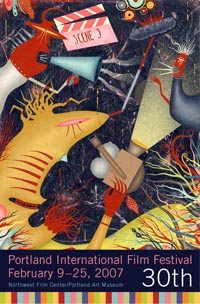 I went to one of the first editions of the Portland International Film Festival back in 1978 or 1979 (thanks to Ruth Hayler of Seven Gables Theatres), where I saw Peter Weir's "Picnic at Hanging Rock" for the first time. They were also doing an Alexander Korda retrospective, and it was great fun to see "The Four Feathers," "Thief of Bagdhad" and "The Private Life of Henry VIII" on the big screen.

PIFF is now celebrating its 30th year, and DK Holm reports on the films, the fest -- and the audiences -- at GreenCine Daily:

Portland breeds a different sort of filmgoer. This is the town where its seemingly unemployed Generation Why sit for hours within its numerous coffee houses drinking $5 dollar brews seriatim and typing endlessly into their brand new MacBooks. Everyone in Portland is "in a band." Or they own a brew pub. Or they virtually live in one. Portland Man rides his bike to work (cursing at the Earth-fracking cars the entire route), enters each of the city's monthly foot race marathons, works for the city (probably the Water Bureau), shops at Whole Foods, and to this day thinks back fondly on that wine tour of Provence he and the wife made back in '92. Portland Woman, by contrast, is an independent and independently minded citizen who can't find a worthy male. She is a mirror image of the "Sex in the City" gals but without the clothes. She is obsessed with shopping, eating, her figure, her co-workers and office politics, her favorite celebrities (or her favorite causes), and is either about to enter, is in, or has just departed her Fag Hag stage. They complain about never meeting any good men and then move in with a meth addict. Personals ads here are very popular and highly effective. People in Portland don't "date." They have a date, and then get married.

Within this context, it's a wonder that any films get seen at all. Yet over the years, the festival has expanded from one small venue to its current reach, four auditoria scattered throughout the city (though all of the theaters are confined to the city's downtown area), hosting a dizzying number of offerings.