'The Break-Up' & 'Superman Returns': Not what you think 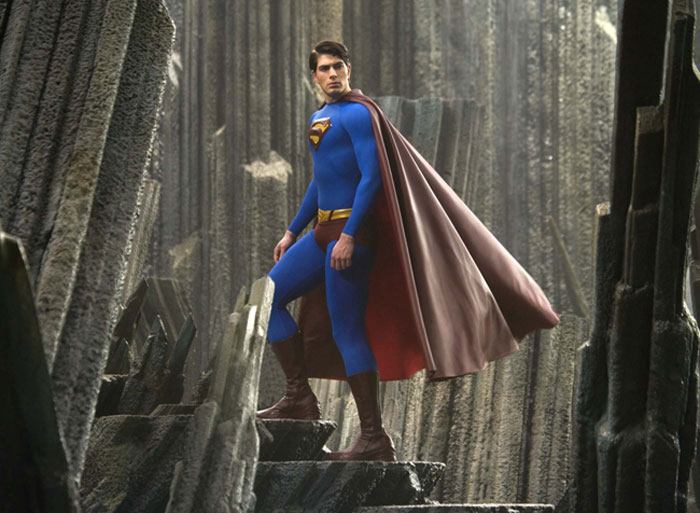 Lovelorn Supe: Looking for Lois in all the wrong places.

Despite the marketing campaign, the makers of "The Break-Up" say their movie is not supposed to be a romantic comedy -- which is precisely what many critics criticized it for not being. It's not "Wedding Crashers II" and it's not a "chick flick." And "Superman Returns" is not a comicbook superhero movie, or even a gay comicbook superhero movie. According to director Bryan Singer, it's a "chick flick."

The Hollywood Reporter says of "The Break-Up":

When is a romantic comedy not a romantic comedy? Universal Pictures' "The Break-Up" ... stars Vince Vaughn and Jennifer Aniston, two big names that naturally fit the romantic comedy mold. Directed by Peyton Reed, it has a colorful supporting cast of scene-stealers, a romcom musical number in which the cast sings a once-popular song and a muscular marketing campaign that makes it look like a successor to last year's "Wedding Crashers," Vaughn's raucous romantic comedy that grossed more than $200 million domestically.

But according to the filmmakers, it's not a romantic comedy. It's not even an anti-romantic comedy. Rather, they designed the movie to explore, in comedic and dramatic tones, one couple's breakup, when neither wants to move out of the condo they share. It's akin to Woody Allen or even Neil LaBute territory, except that in this case it was Vaughn himself who mapped out the terrain.

Turns out Vaughn has been developing the film, which was his idea, with its pair of writers for several years. Perhaps that explains why he gets top-billing over Jennifer Aniston. It's his project.

As for "Superman Returns," in a New York Times interview Bryan Singer approaches his Man In Tights movie from this angle:

When asked over a recent dinner here to describe the action of "Superman Returns," he [Singer] spoke from Lois Lane's point of view: "This is a movie about what happens when old boyfriends come back into your life."

As the movie begins, Mr. Singer explained, Clark returns from a mysterious absence to discover that Lois has a fiancé and a child. This creates what may be the film's central quandary. "Even if you're the strongest man in the world," Mr. Singer said, "if the woman you love has found someone else that she's nearly married to that's not a bad guy, how do you figure out what your place is in that woman's life?"

In "Superman Returns" the hero's sexuality is tempered by traditional values, the screenwriters said. The result is a kind of civilized masculinity, an acting challenge that falls to the previously little-known Brandon Routh. Although Lois Lane has a new boyfriend, Mr. Harris explained, she's still "the woman of Clark's dreams, and it's very difficult." He added: "He's put in the position where he's got to choose between being a good guy and being who he is, which would mean going beyond the borders of who he was. Which for the first time in a movie gives Superman something he can't overcome.

Meanwhile, over at Movie City News, which has for months generated lots of HTML code (and far too many gay jokes) scrutinizing and criticizing the "Superman Returns" posters and trailers (lighten up, guys), David Poland continues to ruminate about the whole "Is Supe too gay?" thing, and scolds the L.A. Times for... I don't know. Being too vague and too late with the "Superman is gay-ish" story? News flash: Movies about guys who lead double lives and have special powers they must hide and secret identities that involve dressing up in tights and capes are kinda gay!
Advertisement
It's called "subtext" (even though it's often not very "sub"), and it's always been there and always will be -- just like in those old pistol-flashin' Westerns. (Now I've forgotten: Was "Brokeback Mountain," or its marketing, too gay or not gay enough last year?) Poland writes:

Warner Bros carries a lot of weight for creating their own problem here. Many of the ads have been very soft, even though these materials have not appeared to be chasing the women's audience. Many of us can tell the difference. These are not “get behind the romance"? pieces, though those may come up eventually. As shown in the posting Key Art Bizarre, the Taiwan poster has butched up Routh’s expression with paint. And the German character campaign may or may not have been stopped here by concerns over tone.

The Taiwan poster has been butched up? Quelle scandale! Isn't this all just a bit... silly? And premature? This isn't like "Munich," where people were attacking the movie politically long before it was ever screened (or filmed, for that matter). This is just a goofy summer comicbook superhero movie -- er, "chick flick." Marketing and positioning and stuff like that can be interesting (in a sociological way), but can't we just wait and talk about the movie once somebody has actually seen it?