There, that wasn't so painful, was it? After all the hype coming out of Cannes (and especially since Harvey Weinstein got his mitts on it for U.S. distribution/Oscar promotion), I'd been kind of dreading "The Artist." Like "Hugo," it just sounded too "charming and delightful" -- and, to paraphrase Lou Grant, I hate "charming and delightful." (Usually because, for me, that ends up translating into "strained and unctuous.") But "The Artist" turns out to be a fairly benign, occasionally clever little musical/romantic comedy/melodrama. (I would not consider it, strictly speaking, a "silent," since it relies on synchronized Foley effects in some scenes -- to pointedly dramatize the Invasion of the Talkies -- and even a few words of recorded dialog.)*

I can understand why it appeals so much to Academy voters: It displays great affection for actors and a nostalgic love for the lost grandeur of the movies in general; it addresses anxieties about how new technologies are once again changing the movie business; it's the only Best Picture nominee shot entirely in Los Angeles (something TWC's Oscar campaign is playing up, big-time).

I posted a consideration of Leonard Maltin's "Awards Season Backlash" (focusing on "The Artist" and "Shame") in early December. And Scott Tobias recently elaborated on the phenomenon at the AV Club ("I like/hate 'The Artist:' How the Academy Awards slant our views of movies"). The Oscars, and all awards, Tobias writes, are not about saluting greatness but reaching consensus:

This has nothing to do with exalting the best films have to offer in a given year--and worse, it's unfair to a movie like "The Artist," which deserves better than to be batted around by oddsmakers or petty little twits like myself who are reacting more to its promotion than its substance.

Well, we all understand that. It's human nature to respond to aggressive publicity and hyperbole one way or another, and sometimes extraneous events make it difficult to experience a movie as just a movie (think "Twilight," "The Dark Knight," "Avatar," "Slumdog Millionaire," "The King's Speech"...). A picture that you might otherwise have recalled only occasionally or vaguely, if you ever thought about it again at all, becomes unavoidable when popularity and/or publicity boosts it into the larger, extended pop-culture conversation. It just keeps popping up in your face for weeks or months. That's when some people either attempt to restore perspective by (intentionally or not) exaggerating their initial reservations, or choose to dismiss it simply because they're so sick of hearing about it. Totally understandable. 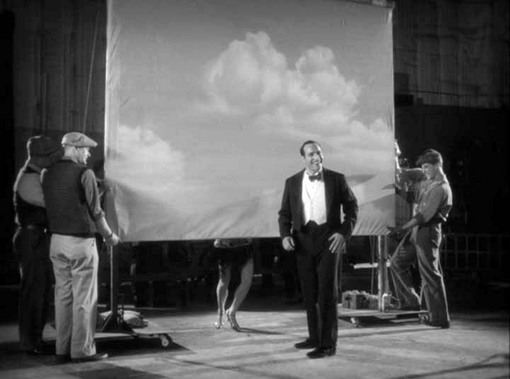 So, OK, let me mention a few things that I genuinely liked about "The Artist" -- which, although it has already become a pariah in some circles, is not an actively evil movie like Paul Haggis's Oscar-winning "Crash." A year after Natalie Portman won an Oscar for "Black Swan," in which her face was digitally applied to a professional ballet dancer's body (how much was actually Portman has not been determined, but estimates range between 15 percent and 95 percent), it's nice to see two Oscar-nominated lead actors (Bérénice Bejo and Jean Dujardin) who can really dance, playing performers who would likely have had some dance training (because that was a basic skill many well-rounded actors were expected to possess in those days). 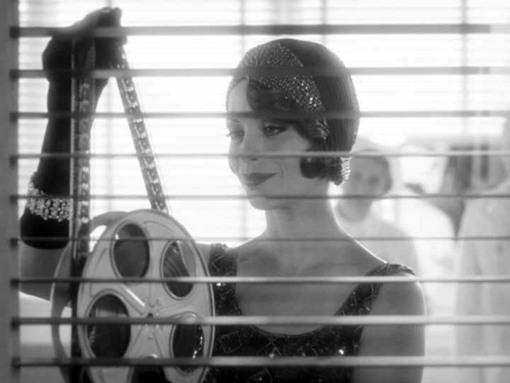 The story may be simple, but the theme -- about trying to hang on to the past -- is probably universal. And the scene in which movie star George Valentin falls for dance extra Peppy Miller on the set, over repeated takes of a long dolly shot, plays with the ability of film to repeat and replay pieces of time, with variations -- as in "Groundhog Day" or "Run Lola Run" or "Source Code." (Later, Peppy will re-create this treasured memory-scene by holding a ribbon of film in her hands...)

"The Artist" has some lovely gags: 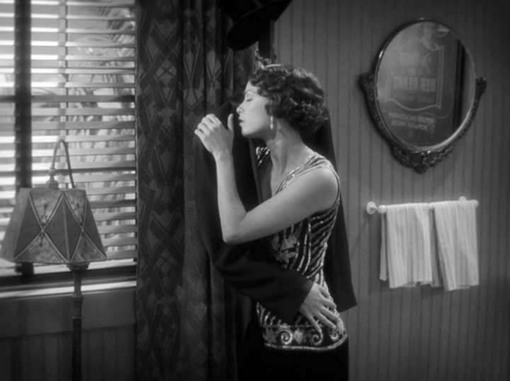 ... the bit where Peppy, in a private reverie, makes out with George's empty jacket while it hangs on a coatrack (I like the placement of the mirror, too; you keep expecting something or someone to appear in it)... 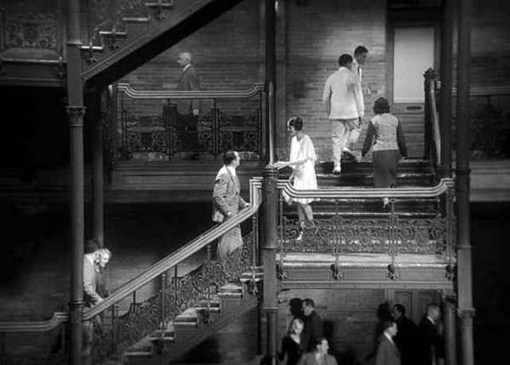 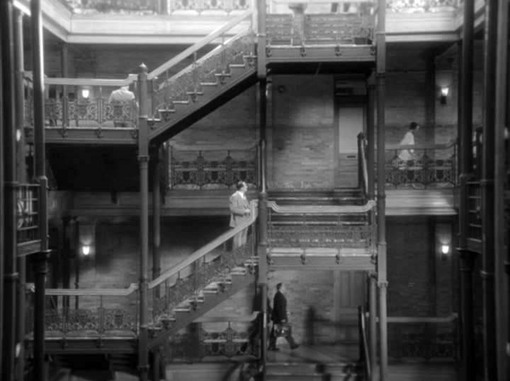 ... the scene on the stairs in the atrium of the unmistakable Bradbury Building, with Peppy ascending, George descending, and others busily going up and down, this way and that, as if this were not a dream factory but the one from Chaplin's "Modern Times" -- another non-silent, synchronized-sound "silent" ... 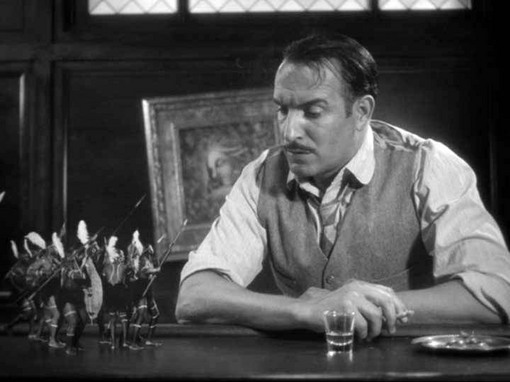 ... George's drunken hallucination of his tiny jungle-safari self with a cadre of native warriors from his final silent flop, "Tears of Love" (the tilted picture on the wall accents his drunkenness)...

What's missing, though, is much sense of the actual aesthetics of Hollywood silents in the teens and '20s -- or how the technological limitations of sound contributed to the staginess of many early talkies. (Leave that to "Singin' In the Rain," I guess...)

"The Artist" doesn't add up to much but a mildly amusing matinee (and I detest the wholesale appropriation of about eight minutes of Bernard Herrmann's "Vertigo" score) -- but I give director Michel Hazanavicius some credit for exhibiting a little more visual imagination than some of today's vaunted "visionary" filmmakers -- the ones I refer to as the "one-thing-at-a-time" directors, who conceptualize in flat visual planes, with very little interplay between foreground and background and a single point of visual interest per moment, per shot. That makes for some very dull "motion" pictures. 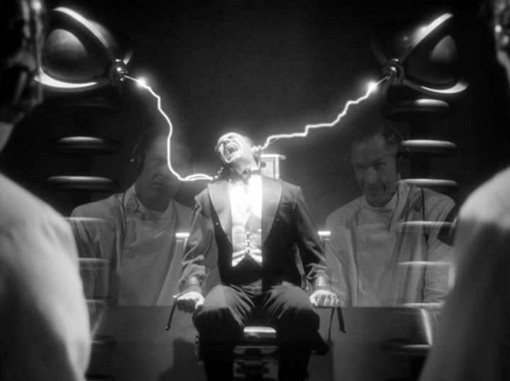 Look at the climactic moment from the movie-within-the-movie that starts the picture: George's character is being tortured with twin Tesla coils by a pair of evil scientists -- and the shot plays out on multiple levels with more 3D effects than you'll see in the latest digital 3D movies: George strapped to the chair in the chamber, the reflections of his torturers flanking him in the glass, and their shoulders in the foreground. It ain't rocket science, folks -- just a clever way of packing visual information and depth into the shot, making it more satisfying to behold. 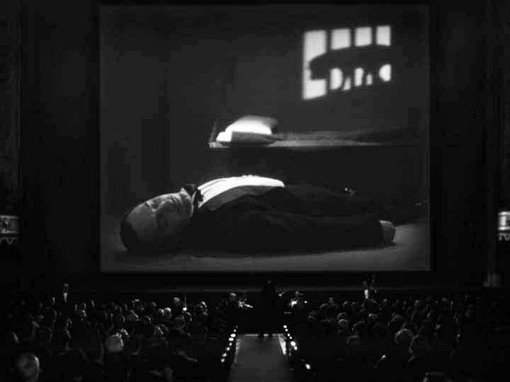 The action in this opening scene moves from the movie on the screen to the auditorium (LA's Orpheum Theater) to backstage, behind the screen. This shot from the movie-within-the-movie is from inside the hall (recalling Buster Keaton's "Sherlock Jr."). The perspective adds extra depth and dimension to the image. Onscreen, George's character lies unconscious on the floor of a prison cell. The shadow of a ground-level barred window reinforce the feeling of captivity. And then the silhouette of a Jack Russell Terrier (Jack, played by Uggie) appears in the illuminated rectangle. 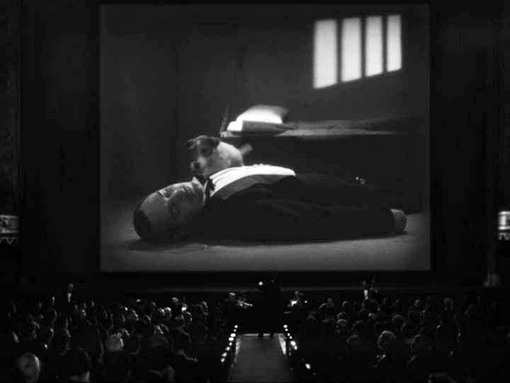 The dog's shadow slips through the bars at frame left, and then he himself enters the picture from frame right. Such a simple thing -- possibly even cost-saving, since an actual barred window would not be required for the set. And yet it makes a routine piece of action a little more fun to watch.

Makes you wonder why more of today's filmmakers don't put just a little more effort and imagination into their compositions...

* You might ask, as I did, why nobody even tries to get George Valentin to make a sound picture. At the end, we discover he has an accent -- but, hell, so did a lot of silent actors who made the transition. Garbo and Dietrich didn't do too bad for themselves, and Maurice Chevalier was a bigger hit in early talkies than he ever was in silents.

Next Article: Why Brad Pitt should win the Oscar Previous Article: Missing Bingham: Alchemy and the movies

Why Brad Pitt should win the Oscar

Missing Bingham: Alchemy and the movies