The Abode of Chaos: Where we live 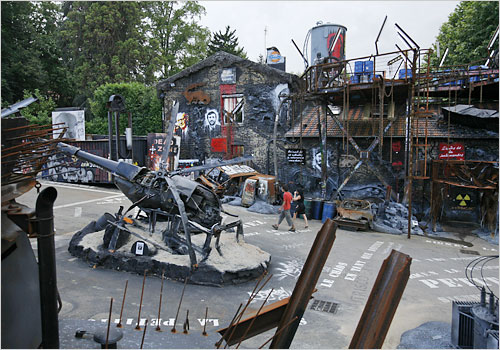 Thierry Ehrmann: "'In your resistance,' I tell them, 'you are contributing to this work. This work is encapsulating you, absorbing you.'"

It's a place, it's a sculpture, it's an installation, it's a performance piece, it's a movie, it's a house, it's a home. It's La Demeure du Chaos, the Abode of Chaos, outside the French town of Lyon. This headline in The Australian caught my eye: "Town outraged over chaos house":

Crashed aircraft, fire-blackened walls, a swimming pool of blood and portraits of Tony Blair and Osama bin Laden adorn a sprawling "shrine to chaos" which is at the centre of a dispute in a village on the outskirts of Lyon in France. [...]

Thierry Ehrmann, 44, the owner and creator, was fined E200,000 ($A336,000) for failing to seek planning permission to turn his 17th-century coaching inn and its grounds in the village of Saint-Romain-au-Mont-d'Or into a theatre of war. The appeal judges annulled a lower court order to have the site, developed by 45 European artists, restored to its original state.

Ehrmann's celebration of the apocalypse, inspired by his experiences in the Middle East and by the events of September 11, 2001, has enraged residents who are offended by its charred walls, twisted metal, burnt-out cars and battlefield debris. A mock oil platform sits on one roof amid camouflage netting. The garden includes a sculpture recreating the remains of the World Trade Centre. [...] 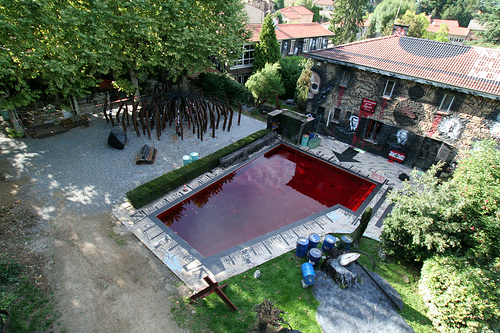 The swimming pool of blood.

Ehrmann, who occupies the house with his two Great Danes, Saatchi and Reuters, said that the ruling was a victory for art. The mayor was helping to publicise a site which has become the most visited free open museum in France, he added. "We get about 90,000 people a year," he said. Little was visible from the outside, he added.

Film and video ("rushes") of the Abode of Chaos can be found at its web site, here.

I feel a strange connection to Ehrmann -- beginning with his two dogs and their names, which made me laugh. To me, there's something profoundly necessary about taking the chaos of the world around you and bringing it home -- incorporating it into your everyday life -- in the form of art. Watching the (heavily censored) images on television on 9/11, I was reminded of the famous Hieronymus Bosch triptych, "The Garden of Earthly Delights," the nightmarish vision "depicting the dreams that afflict people who live in a pleasure-seeking world" (Britannica). 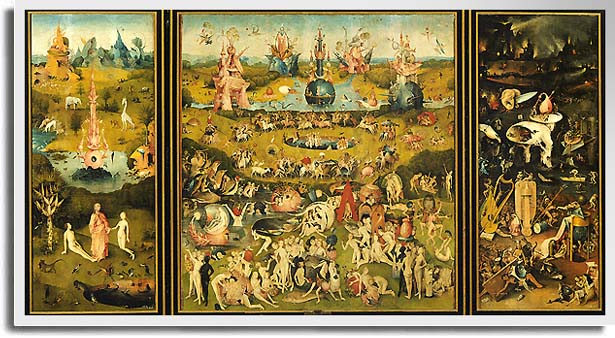 How does your garden grow?

I'd always been fascinated -- attracted and repulsed -- by it since first finding and endlessly studying a picture of it as a child; later, I would stand and scrutinize it for myself at the Prado, feeling I was in the presence of something timeless and uncanny. I suddenly felt the need to have it around me, to remind me of... something. Not just of 9/11, but of the fact that something like it, though not necessarily of the same scale or media magnification, happens every day. And that we make our own heaven and hell on this earth every day. And other things I still haven't sorted out. Hardly profound or original notions -- but I felt a need to incorporate it into my world, my consciousness. (This is, I think, part of my attraction to horror movies -- a drive to get close to the horror without being destroyed by it.) I ordered a print from the Prado, framed it, and placed it above my dinner table. It's a symbolic gesture, and some might see it as trite or trivializing, but all I can say is that it means something to me. I wonder if something like that is going on with Ehrmann. Imagine living with a swimming pool of "blood"... (Good thing his dogs are both solid black.)