Take the Wrong One Back 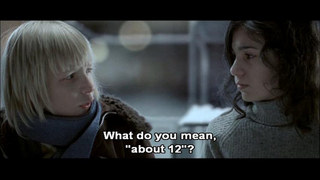 BEWARE: If you pre-ordered or bought a DVD/Blu-ray of the gorgeous Swedish vampire picture "Let the Right One In" -- don't open it! Return it immediately. For reasons that defy business sense (and artistic sense and common sense), on March 10, 2009, Magnolia Home Video/Magnet Releasing put out one of 2008's most acclaimed movies on discs with stripped-down, poorly translated subtitles -- NOT the version released in North American theaters. Last week disappointed and conscientious bloggers from Icons of Fright, Bloody-Disgusting.com and elsewhere were on top of the story, shocked that such a high-profile release would be given such shoddy treatment. The company says the disc is not technically "defective." It does what it's supposed to do, apparently. It just does it badly. Don't buy it. Return it.

A spokesperson for Magnolia/Magnet contacted by nearly-impossible-to-navigate site, TheDigitalBits.com, has reportedly claimed that, in response to viewer objections, it will correct the error on future pressings, but:

There are no exchanges. We are going to make an alternate version available however. For those that wish to purchase a version with the theatrical subtitles, it will be called out in the tech specs box at the back/bottom of the package where it will list SUBTITLES: ENGLISH (Theatrical), SPANISH.

Why would a company treat one of its most prized assets in such a way? I asked a friend who has worked on the subtitling/captioning of many great films DVD and other formats. He writes:

I talked to my supervisor, after first making sure it wasn't my company that helped foist those titles onto the public, and the conclusion we came to is the one the writer of that post came to-- it was undoubtedly an economic decision that betrayed little or no care as to the actual quality of the translation. We run into this all the time, and our efforts to campaign against using the cheap stuff (often translations that are rendered by people who aren't completely conversant and/or educated in the given language) are usually successful-- we have a bunch of very smart folks who can demonstrate the lackluster qualities of a translation like the one used for "Let the Right One In" before the thing gets encoded and rendered onto thousands of discs. My Swedish translator friend said that he felt even the theatrical version left something to be desired, but that it was generally pretty good, and far superior to the hack job in evidence here.

We often see these kinds of translations, but most of the stuff we do is generated from files created and timed to the original dialogue by English editors (like me) and then sent to the translators for the ordered languages, all of whom are degree-educated in the languages they are dealing with. They're familiar with the different dialects and subtle shifts of meaning that not only occur from English to another language, but often within the new languages themselves, which could easily torpedo a screenplay posthaste if not given proper attention. I'm not saying what we do is perfect, but it's almost always demonstrably better than a translation created by someone working on the cheap, and we routinely get good feedback from viewers who know the language as well as those who don't.

Meanwhile, AVOID VIDEO VERSIONS of "Let the Right One In" until the one with the theatrical subtitles becomes available. The top customer review on Amazon.com warns potential buyers of the screw-up -- though I hate to see a movie get so many one-star comments from people who love the movie but hate what the territorial video distributor has done to it.

UPDATE: In a comment at Icons of Horror, Andrew Frank, who identifies himself as the head of the DVD division of Mongrel Media (which released the film in Canada with the same "subtitle issues"), quotes Magnolia's official response, which he received on Friday the 27th:

Yes the bloggers are having a field day on this one. Normally they like to pick on the English Dub tracks, but in this case it's the subtitles. Obviously online tend to get rowdy and bandwagon mentality without knowing all the details. The current subtitle track is not altering the context of the film at all, in fact it's a more literal translation than any prior version of subtitles. It's not a defective or faulty subtitle file. Just more literal and larger in size for the small screen. Both English and Spanish subtitle files were produced for this dvd release. Frankly it's not all that uncommon to have the subs vary from prior releases, typically go unnoticed as subs are purely a translation of film dialogue. This wouldn't have been a blip had it not been for one particular horror blog doing a side by side and claiming that they are wrong. They are not. We are not doing a recall or anything of that nature, again, these are not defective. Title came out two weeks ago and general public don't notice and don't care - bloggers are well known for jumping on something, making an issue of it and moving on. We have decided that based on the feedback that we will be making a running change, so that going forward (once inventories deplete), we will be making that subtitle version available. Options in set up will be; English Subtitles / English (theatrical) Subtitles / Spanish Subtitles.

Nice attitude. Blame the messenger. You can judge for yourself if the new English titles are up to the standards of the US theatrical release by viewing the comparisons here.