John T. Chance is an enforcer of justice. He doesn't wear a cape or a mask; he wears a badge and a hat -- the latter a well-worn specimen just like the one Duke Wayne himself wore in John Ford's Cavalry Trilogy. But just because he's a towering figure and a natural-born leader, the kind of authoritative moral icon ordinary mortals look to -- and look up to -- doesn't mean he's invulnerable. Even the greatest of heroes age, and Chance has to face the limitations of flesh and blood while still keeping the good citizens of the town, those he has sworn to protect and defend, safe from the greedy and less scrupulous elements who would put themselves above the law.

Chance has a job to do and he's good at it. That's a source of pride and a mark of his professionalism. He's not about to let a bunch of well-meaning greenhorns risk their necks and get hurt on his account.

When a well-meaning local suggests he deputize a posse of volunteers to help him deal with some bad guys by the name of Burdette, Chance responds: "Supposing I got 'em. What would I have? Some well-meaning amatuers, most of 'em worried about their wives and kids. Burdette has 30 or 40 men, all professionals. Only thing they're worried about is earning their pay. No, Pat. I'd just be giving them more targets to shoot at. A lot of people'd get hurt. Joe Burdette isn't worth it. He isn't worth one of them that'd get killed."

Still, Chance isn't foolish enough to think he can take on the forces of evil all by himself. He's too old for that. But has the good sense to understand who he can rely on -- and that means a few skilled associates who may not look like much at first glance but whose mixture of strengths and weaknesses make them a pretty good unit. Together, they're good. 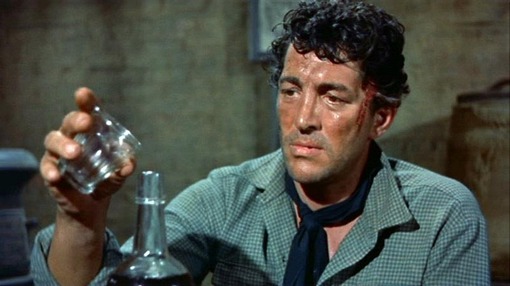 Dude, Chance's former deputy, is also one of his oldest and closest friends. He used to be a hell of a marksman. But booze became his Kryptonite. Dude has fallen on hard times and needs a shot at redemption that only Chance, and a steady hand, can provide him.

Colorado is the hotshot kid. Still wet behind the ears? Not quite, but he's young. He's also quick, and a dead shot with a gun.

"Is he as good as I used to be?" Dude asks. "It'd be pretty close," Chance says. "I'd hate to live on the difference.... I'd say he's so good, he doesn't feel he has to prove it." Which is not to say he won't hesitate to do so if necessary.

Stumpy is... well, Stumpy. Sure, he's a toothless old cripple -- ancient enough to be Chance's own father, probably -- but he's loyal, fearless and a lot craftier than he lets on. He guards the jail, keeps an eye out for Chance, and looks after him like Alfred looks after Bruce Wayne.

OK, so you've got an old man whose just hard enough to keep from going soft; an alcoholic; a kid; and toothless old gimp. Well, even the god Achilles had that damn heel of his. "A bum-legged old man and a drunk." says a trail boss friend of Chance's. "That's all you got?"

Chance shoots back: "That's WHAT I got." What he's also got is a group of men with right on their side: an experienced champion of the law, the fastest gun in the West, the former fastest gun in the west, and sidekick who keeps things organized and can sneak under the radar.

You know what? This could be a great movie...