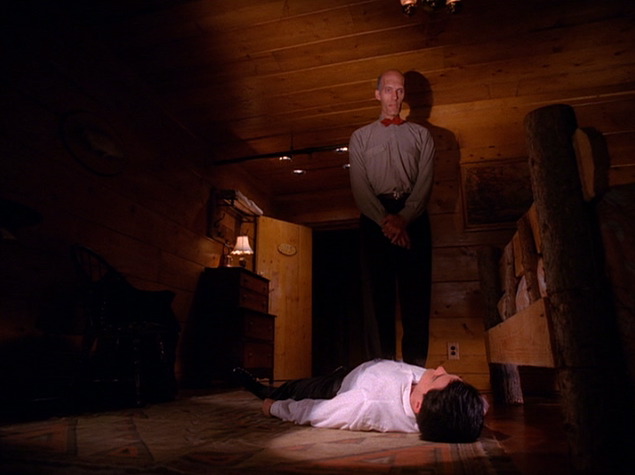 "It is happening again."

From my essay on the DVD release of "Twin Peaks Season 2" at MSN Movies:

"A path is formed by laying one stone at a time." -- The Giant

The robin, the mill, the saw blades, the road, the waterfall, the surface of the water. These are the markers down the path to "Twin Peaks," David Lynch's television town full of mysteries, nestled in the deep, dark woods of the Pacific Northwest. From April 8, 1990, to June 10, 1991 -- as the ABC show rapidly metamorphosed from hypnotic oddity to pop-culture phenomenon to baffling shaggy dog story -- these images in the opening credits (accompanied by the twin keyboard scales of Angelo Badalamenti's lush and ghostly score) provided the ritual entrance to Twin Peaks.

This is a territory circumscribed by ritual and repetition -- of daily life and cryptic clues and incantations. These iconic introductory images are Twin Peaks' Stations of the Cross, representing landmarks in the life of Twin Peaks' sacrificial lamb and lioness, Laura Palmer: high school beauty queen by day, tormented naughty girl by night. The Passion of Laura Palmer, murdered during Lent, the penitential season of grief, was lamented, reconstructed and re-enacted ("It is happening again") in one two-hour television pilot, a seven-episode first season, a 22-episode second season and a feature film prequel/coda, "Twin Peaks: Fire Walk With Me."

Seven years after the DVD release of the first season of "Twin Peaks," the second and only full-season has at last appeared. (The two-hour pilot, mired in a tangle of rights issues, has never been released on DVD in North America.) Looking back over the series, with a sense of the overall terrain, it's clearer than ever how "Twin Peaks" was meant to be experienced. A hybrid of supernatural murder mystery and soap-operatic melodrama (and, though genuinely terrifying and disturbing, simultaneously a parody of both), "Twin Peaks" was never quite a serial, in that it did not lay its stones, sequentially, one at a time. It dumped pebbles and boulders all over the place. This is Lynchland, after all.

As the titles (and the title) suggest, Twin Peaks (and "Twin Peaks") is a set of geographical and psychological coordinates -- a spatial and temporal map like the one that, in the series' final hours, reveals the entrance to the Black Lodge (containing the red room with the dancing Man From Another Place) in space and in time. "I just know I'm going to get lost in those woods again tonight," a doomed Laura wrote in her diary. And that's the invitation Lynch extended to viewers: "Let's get lost."