Red eye in the sky 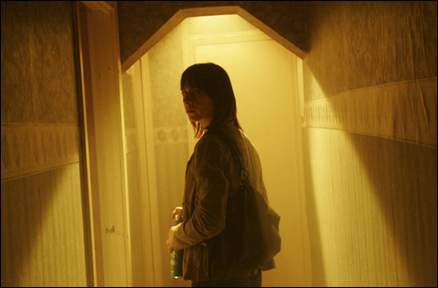 My review of "Red Road" at RogerEbert.com:

Vertigo, they say, is not really a fear of falling; it's a fear of jumping. The gap between the subject and the ground creates such strong psychological conflict in the afflicted that the temptation to eliminate it by leaping into the void is overpowering, and dizziness sets in.

A similar dynamic exists between the voyeur and the object of his or her scrutiny. In the chilling and dread-laden "Red Road," Jackie (Kate Dickie), a closed-circuit television operator in Glasgow, sits before a bank of video screens connected to surveillance cameras across the city. Her job at "City Eye Control, Division E," is to monitor the feeds for suspicious activities, and to report what she sees to the proper authorities. She scans some of the city's worst neighborhoods for signs of trouble, with an eye toward averting it before the victims need to call for help.

From the very first scene, we feel an ambivalent tension between Jackie and the people on her screens. She can't help empathizing with the overweight young woman who works as a night janitor, donning headphones and dancing to her MP3 player in an empty office building. Or the man who walks his old and ailing English bulldog. But Jackie remains at a distance. They have no idea she's watching.

We immediately sense that Jackie is harboring a darkness and despair that isolates her from everyone else. She uses the wall of video images as a buffer between herself and the outside world -- or between herself and her own life. Until she spots a red-haired man named Clyde (Tony Curran), and -- feverishly, compulsively -- penetrates the screen and, for reasons unknown, begins to insinuate herself into his life. It's an excruciating process, but she seems driven to forge ahead, even when she feels she can't go through with it.