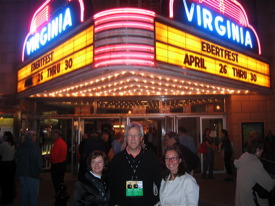 So many movies and filmmakers and conversations, so little sleep. Well, that's a film festival for you. I was especially impressed with Ramid Bahrani's "Man Push Cart" -- a film of extraordinary attention to detail in every aspect. Not only does it closely observe the behavior of its central character Ahmad (Ahmad Razvi), a Pakistani pushcart vendor at 54th and Madison in New York City, but every image and sound and gesture accumulate to create a Sisyphean portrait of a life slowly rolling out of control. More about it and other Overlooked events later. Meanwhile, check out the photo album(s) and MP3 audio of selected Ebert on-stage interviews.