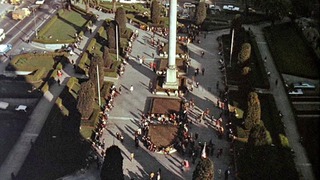 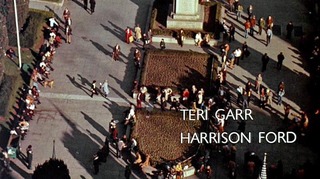 It begins high above Union Square in San Francisco and by the time it ends, nearly three minutes later, the opening shot of Francis Ford Coppola's 1974 film, "The Conversation", will hone in on one as-yet-unidentified man.

The slow descending zoom, looking down at a cheerful park, full of people, seems at first unobtrusive. Credits roll in the lower right corner of the frame, directing our gaze to the sunlit left hand side. Here, from a distance, we are able to observe a wide variety of people, but it is a very active mime that commands the most attention. All of this seems very normal until about the 1:15 mark, when a strange bleeping noise disorients the viewer. It comes and goes quickly, but will return, unexplained, several times throughout the shot.

This sound is our first indicator that something more than casual observation or location setup may be going on here. The second indicator comes when the camera intentionally settles on the action of the mime, who soon begins to follow and imitate a middle aged man dressed in a grey raincoat. The camera stays with these two for a little while. The mime continues his act while the man is totally dismissive. Soon the mime gives up on the uninterested man and steps out of the frame, leaving the camera to hold on him until the shot is over. 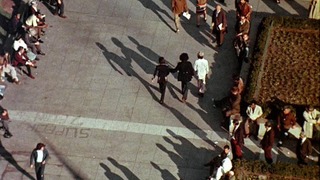 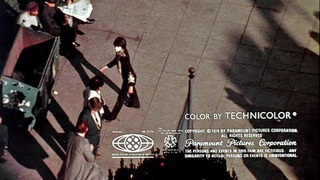 The sequence of shots that follows informs us that the strange bleeps we heard in the opening shot were sound interference captured from a long-range microphone. It becomes apparent now that the cameras slow zoom in the opening shot is a stand in for the microphone, a tool for surveillance that will factor greatly in the following narrative. We also learn the identity of the man in the grey raincoat. He is Harry Caul, an independent surveillance man and protagonist of this film. Putting these two pieces of information into the equation reveals the diabolical nature of our opening shot. Harry is be being observed by Coppola's camera -- by us, the viewers of "The Conversation" -- unbeknownst to himself. The tools for spying that he uses literally double back on him as he goes about his work on what will be one of the most significant jobs of his life. 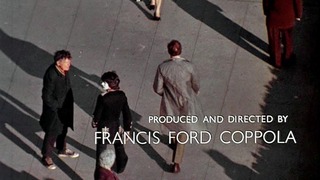 Throughout the rest of "The Conversation" the camera will assume the cool observational tone found in the opening shot. This mood, or style, will continually reflect upon Harry's world of privacy, spying, and self-imposed isolation. The camera itself will trap Harry, leaving him all the more vulnerable because he is alone. 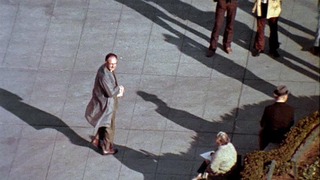 JE: Thanks, Nathan. This is another terrific example of those "What are we looking at?" opening shots that teach us how to watch the movie to come. Your eye is free to wander and pick out details in the shot: the dogs, the old lady with the purse, the blind man, the black dude with the afro, the panhandler... all part of the mise-en-scene on the sunlit left side of the frame, the primary composing space here. Before we're even introduced to Harry Caul (though, conceivably, he could be in the lower left corner in the first few frames of the shot, only to be reintroduced later), before we know anything about him, we're effectively inside his head. He's a surveillance expert, a private spy, and the viewer becomes one, too -- scanning the image, listening intently to the multi-layered soundtrack, and putting them both together to decipher pieces of information. What we don't know (and neither does Harry, until the end of the movie) is the larger context for what we're seeing and hearing...