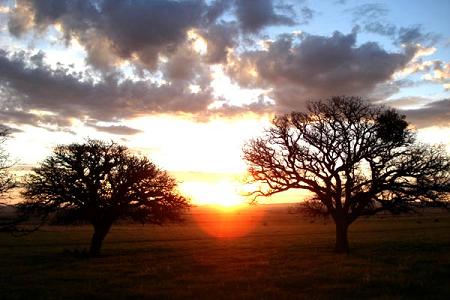 From Paul Clark at ScreenGrab.com:

Despite the sensational buzz for Carlos Reygadas’ "Silent Light" at Cannes, I approached the film with a bit of trepidation when I got a chance to see it in Toronto. I didn’t much care for Reygadas’ previous features, Japon and Battle in Heaven. I could see that he was a talented director, but his attention-grabbing tactics and leaden symbolism made it feel like he was trying too hard. A director who films a shot of a man writhing in agony next to a horse’s corpse is just aching to be taken seriously as an artist.

But all of my doubts melted away during the glorious opening shot of "Silent Light." The film begins with an image of a starry sky, with nothing but chirping crickets on the soundtrack. The camera then tilts slowly downward until we see the horizon in the distance. After this, the sun slowly rises, and we begin to make out the rolling hills, and a few trees. As the sun continues to rise, the soundtrack begins to teem with life- chickens, cows, and the like- and we see a farm. All the while, the camera ever-so-slowly pushes forward toward the horizon, as the sun rises higher and higher above the hills.

If I wasn’t sure before whether Reygadas was worth taking seriously, this shot put my misgivings to rest. Simply put, it’s a stunner, partly because Reygadas makes it feel so effortless. It’s an extremely patient shot, taking at least five minutes, and in this time he acclimatizes us to the deliberateness of the film’s world. "Silent Light" is set in a Mennonite community in Mexico, far removed from fast-paced modern life, where people speak slowly and aren’t prone to snap decisions. The film’s opening shot prepares us for this beautifully.

The eminent Catholic film blogger Victor Morton has theorized that the film’s opening shot is a distillation of the Biblical creation story. Reygadas begins with the stars, then adds light, nature, and “nature shaped by man," before finally cutting to the world of man. This theory makes a lot of sense- as film about a religious community, "Silent Light" is steeped in religious imagery, and so it’s only fitting that the story should begin as the Bible does. By extension, Reygadas’ opening shot is an act of creation in itself, with the film’s world manifesting itself before our eyes.

But the power of the opening shot of "Silent Light" is apparent even to people who aren’t religious. This is because Reygadas has taken a phenomenon we all take for granted -- who hasn’t seen the sun rise thousands of times? -- and shown it to us in a new context. A subtle bit of time-lapse photography aside, he doesn’t try to transform the sunrise with blatant cinematic trickery, but simply invites us to really look at it. A visionary filmmaker invites filmgoers to see the world through his eyes, and based on "Silent Light" I’d say Reygadas qualifies as a visionary. The opening shot is a masterpiece in itself, and the rest of the film somehow lives up to it.

JE: Thank you, Paul. I need to catch up with Reygadas. Filmbrain has an ecstatic NYFF review of the film here. I have not seen the sun rise thousands of times, because I prefer to be snoozing at that time, but this sounds like a sunrise worth catching. As some dude in the Hebrew scriptures said: "Let there be light!"

What is so special about the incredible opening shot, which some of my buds say is among the most beautiful in movie history? It’s not simply some “inherent beauty of nature” (I would not have been impressed by that), but the fact that the sunrise actually happens before our very eyes (though time lapse is used) and that Reygadas takes the time to show the light change the world, or actually creating our experience of it....