From Brandon Colvin, Out 1: 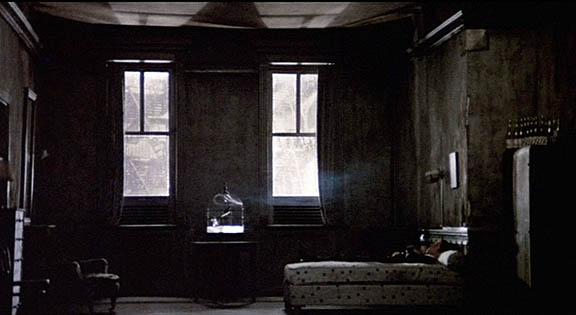 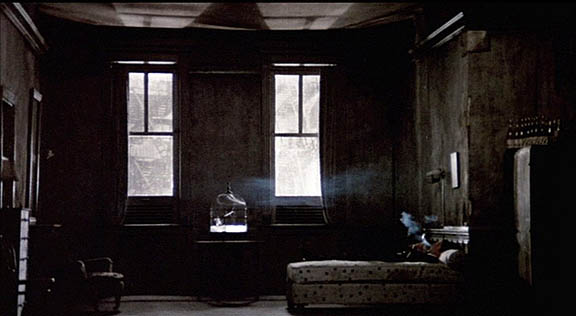 The opening shot of Jean-Pierre Melville’s 1967 noir masterpiece "Le Samourai" establishes the tone of Melville’s contemplative crime film, defines its amoral protagonist Jef Costello (Alain Delon), and introduces the connections between Costello, a hired assassin, and the concept of the Japanese samurai, particularly the ronin, or masterless samurai. The nearly three-minute shot maintains a simple but wonderfully expressive composition throughout, remaining within the drab gray-blue confines of Jef’s apartment.

Jef lies stiffly on his white mattress with black polka dots in the bottom right corner of the frame. Two windows, overflowing with soft light, balance the composition by providing visual anchors in the center of the frame. Jeff’s pet bird chirps away in his birdcage, resting on a table centered between the two windows. Chairs and dressers crowd the outskirts of the frame, completing the layout of Jef’s ascetically simple, disciplined apartment. For minutes, the only sound is the constant drizzle of rain outside the windows and the intermittent whooshing of cars on the street below, punctuated by the light cries of Jef’s bird. Jef’s lights a cigarette and when he puffs, the smoke floats up softly, stagnating in the light of the windows, rolling around as if trying to escape. The completely still shot seems as if it’s attempting to emulate the frozen camera of Ozu. Jef lies with solemnity and his imprisonment in his dreary apartment is analogous to the situation of his caged bird. 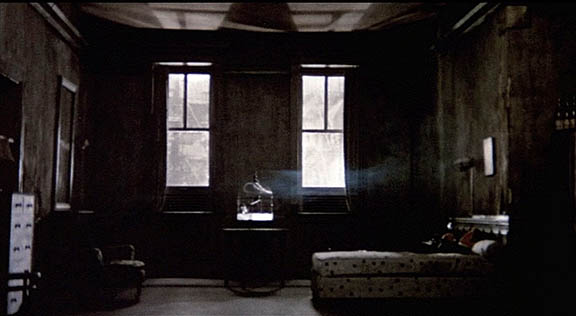 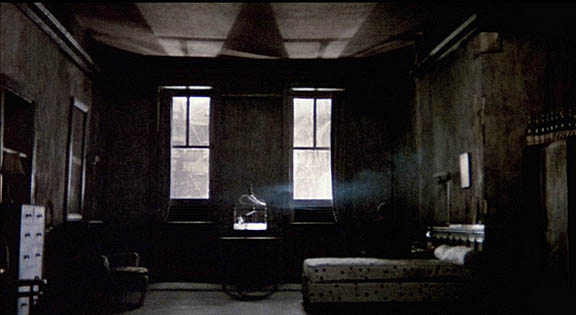 Following the credits, text appears in the top right corner of the shot. The text reads, “There is no greater solitude than that of a samurai, unless it is that of the tiger in the jungle . . . perhaps . . .” The quote is attributed to Bushido (Book of Samurai), which Melville fabricated for the film, and illustrates the connection between Jef’s disciplined isolation and the social exile experienced by great warriors, like samurai. Particularly interesting is the connection between Jef and ronin, or masterless samurai. Ronin are noted in Japanese storytelling for their lack of morality and existential listlessness, caring for themselves above all and feeling no loyalty to exterior forces. Jef exemplifies this sort of selfish existence, which, as with the ronin, fates him to a sense of dread and, ultimately, death.

Immediately after the text appears in the frame, the shot begins undulating violently from rapid zoom-ins while the camera moves out. The jarring mutation of the shot results in the shot actually being wider, the camera further away from Jef. His isolation and distance is intensified, correlating with the revelation of Jef as a type of modern ronin. Following the widening of the opening shot, Jef sits up in his bed and turns his back to the camera, facing the windowed wall, smoky light dancing over his head. He has turned away from the camera, away from the audience, delving further into his own separation and loneliness. This is Jef’s acceptance of his role as the necessarily solitary warrior, an enforcer of the zeitgeist of “honorable” violence.

The slow, lingering pace of the opening shot of “Le Samouraï” sets the momentum of Melville’s film and the gray-blue dreariness of the color scheme is consistent throughout, almost as if Melville is attempting to make a color film in black and white. This anachronistic quality is ultimately what defines Jef, a remnant of the past, of the legend of the ronin, a pre-vanquished anti-hero seemingly awaiting his own extinction.

JE: What I find most astonishing about this spellbinding shot is the overriding feeling that Jef is in suspended animation when he's in his room, just waiting to be summoned into action. You don't even necessarily notice him at first, until a curl of smoke rises from the bed. Just about the only motion in the shot, besides the smoke, comes from the bird and the shadows/reflections (on the ceiling and the soundtrack) from the cars passing by below his windows. The man himself is but a shadow, as we see when he rises from the bed -- a silhouette, a premature ghost, called into animation by his mission.