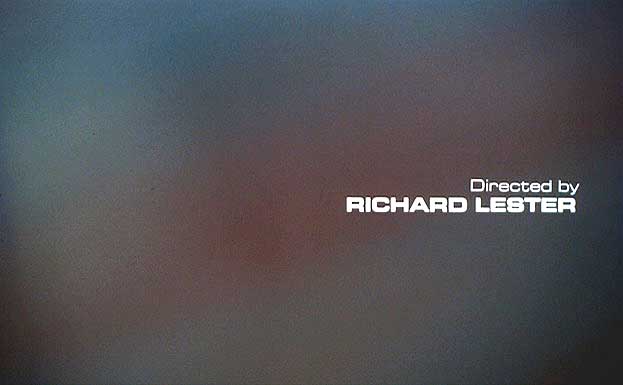 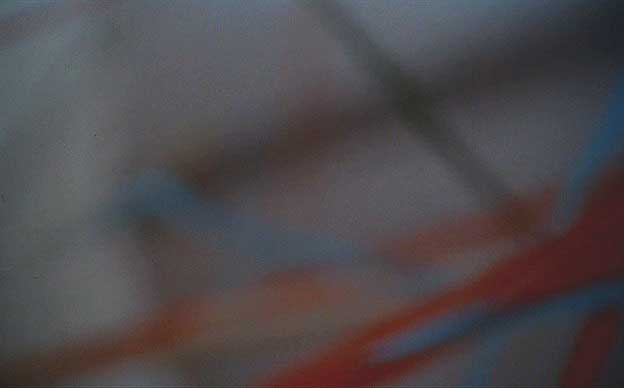 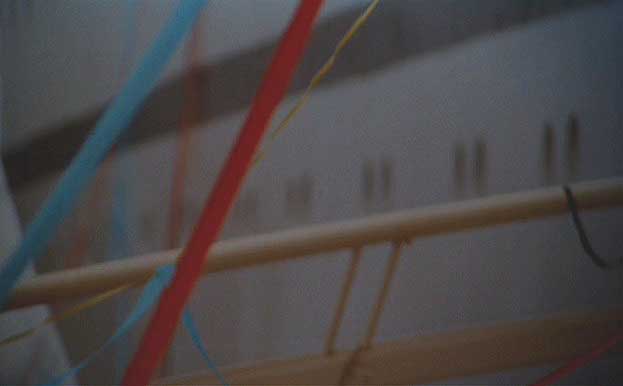 The opening credits of Richard Lester's "Juggernaut" (1974) play over a neutral backdrop that can just barely be detected as an undefined image rather than a simple blank screen. Whether it's an out-of-focus image or something more elemental -- say, the granules of the film emulsion itself -- is hard to say. The basic color is a beige-y grey, with now and then the merest hint of a diagonal band of something warmer attempting to form across the frame. On the soundtrack are noises similarly difficult to ascertain; some suggest hammers falling, an unguessable project under construction, while in other select nanoseconds we seem to be listening to something beyond the normal range of hearing -- the mutual brushing of atoms, perhaps, in an unimaginably microscopic space. In short, nothing; and the essence of everything.

The first shots cut in after the (swiftly flashed) credits have ended, and we get our worldly bearings. An oceanliner is preparing to depart an English port and, among other things, a dockside band is tuning up. I say "first shots," but we won't cheat: there can be only one opening shot, and it's over with before we barely register it. And indeed, why register it? It's nothing dramatic. Indeed, it's barely informational. There are streamers, fluttering limply and unremarkably in the breeze. Send-off streamers; bon voyage and all that. Most of their brief time onscreen, they're out of focus, because that's a gentle way of easing us from the shimmering nothingness behind the credits and into the coherent imagery of a movie we are obliged to pay attention to. Besides, this is 1974, five years after cinematographer Laszlo Kovacs and "Easy Rider" had made rack focus a fashionable, sometimes almost fetishistic aspect of self-consciously contemporary moviemaking. (Not that Kovacs worked on "Juggernaut": the DP is Gerry Fisher, working with Lester for the first and last time.) So out-of-focus and then in-focus streamers, no big whoop. And the movie moves on.

It's only on a second viewing that these streamers may hit us like a fist in the chest. For the essence of the shot is that there are two streamers in particular traversing the frame in clarity. And one is red, one is blue.

Do you know "Juggernaut"? More than likely not. It's rarely talked about and little shown on cable. I just clicked on IMDb and was surprised to discover it actually is out on DVD. I'm ordering a copy as soon as I finish writing this, because it's among Lester's half-dozen best films, one of the best films of the '70s, and probably the finest entry in the (mostly negligible) disaster-movie genre that had pretty well exhausted its box-office appeal by the time "Juggernaut" came out. The luxury liner puts out to sea, and once it's in mid-ocean, the shipping line receives word from a mysterious presence self-named Juggernaut that several bombs have been placed on board. One goes off, more or less harmlessly, to show that Juggernaut isn't kidding. If a great deal of money isn't paid P.D.Q., more bombs will explode, ruinously enough that the liner and the several hundred souls aboard will be lost.

"Juggernaut", a movie that begins in dreamy formlessness, almost immediately resolves into a gripping suspense narrative in which detail is paramount. It's there in the performances of a sterling cast, including such ace professionals as David Hemmings, Ian Holm, Freddie Jones, Roy Kinnear, Shirley Knight, Clifton James, Roshan Seth, Cyril Cusack, Michael Hordern, Caroline Mortimer, and the prestellar Anthony Hopkins, as well as a couple of marquee names, Richard Harris and Omar Sharif. The latter, respectively playing the leader of a bomb-defusing squad helicoptered out to the ship and the captain of the vessel, give more disciplined and compelling performances than we had long since ceased expecting of them. Still more crucially, detail is there in the crisp storytelling by Lester, which doesn't linger a frame longer than necessary on any of the information and atmosphere it is imparting. The precision and professionalism of the filmmaking becomes a virtually metaphysical corollary of the professionalism brought to the assignment by the bomb unit and (credit where it's due) the disconcertingly sympathetic genius behind the diabolical scheme. (Lester took on the film two weeks before shooting was due to begin, demanded and supervised a significant rewrite of the screenplay, and finished the shoot four weeks ahead of schedule -- all while taking time off before completing the final scenes of his epic, two-part comeback movie, "The Three" and "Four Musketeers"!)

The suspense climax comes to bear, of course, on whether Harris makes the right choice on clipping the right wire in the telltale bomb of bombs: the red, or the blue?

May we give this much away? He cuts the right wire. And that's it. The movie will be over within seconds. Next thing we see, Harris is striding the length of the liner, still at sea, enjoying the fresh air and sunlight as he comes to the stern rail, observed by an airborne camera that lifts away as the ship grows smaller and smaller heading into infinity -- safe now, yet still looking bravely vulnerable, because we know how finite is the line between security and catastrophe. The image dissolves to something approaching the abstractness of the opening-credits backdrop: just the surface of the sea, rolling, light-spangled, eerily overcast with a filter effect very like a veil. All we see of a planet where human existence has scarcely ever seemed a more precarious and evanescent thing.

JE: Thanks again, RTJ, for reminding me so eloquently of a terrific movie experience I had long ago, and one I plan to have again soon. The Seattle Film Society showed it years ago, at RTJ's suggestion, and I remember it as a wonderful surprise -- one of those unjustly neglected movies that people will really enjoy discovering. And, as you can see -- I ordered the DVD as soon as I received this Opening Shots contribution!