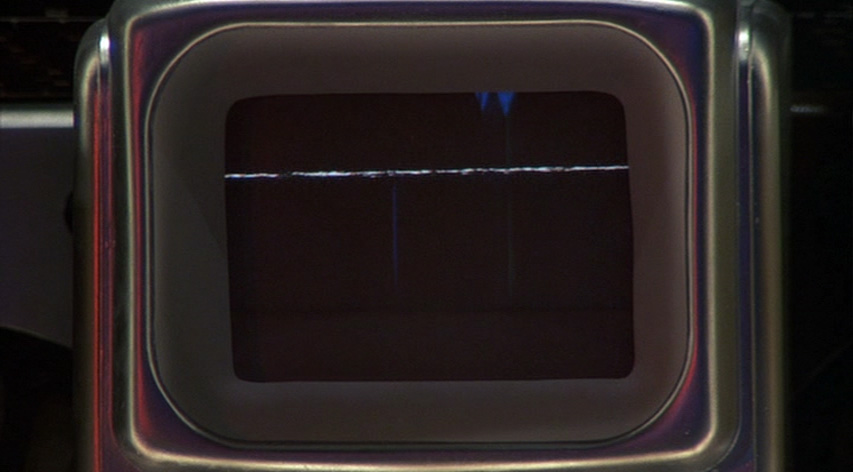 This is really the second shot, following a brief bit of above-cloud photography. Let's not be too picky.

It starts with a TV set turning on. A suitable enough opening that many films have used. We know that when the movie starts with some TV, always with a healthy dose of analogue noise, we're being greeted by a commentary on the movie's world before we enter it. The TV set itself has a retro-futuristic design; the kind that was popular at least from the 20s into the 50s. All smooth curves, no sharp angles. Red and blue lights outside blink on and off, casting subtle glows onto the scene. 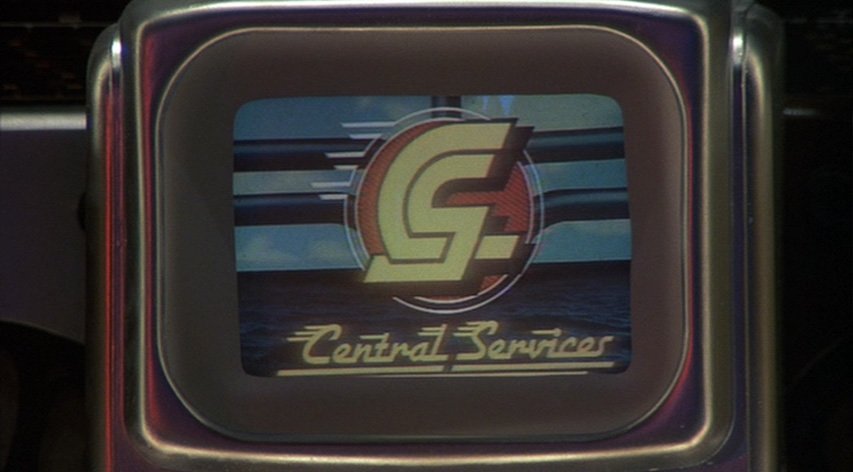 The TV shows a commercial from Central Cervices. An imposing logo and a happy little jingle: "Central Services. We do the work, you do the pleasure!" And already we don't trust them! It's a very Orwellian thing. We've lost freedom of choice in this society, and that's exemplified here by Central Services. All our home repair needs are now taken care of by official government employees, who can be as inefficient, bureaucratic, and unaccountable for their own blunders as they please. The customer comes last. 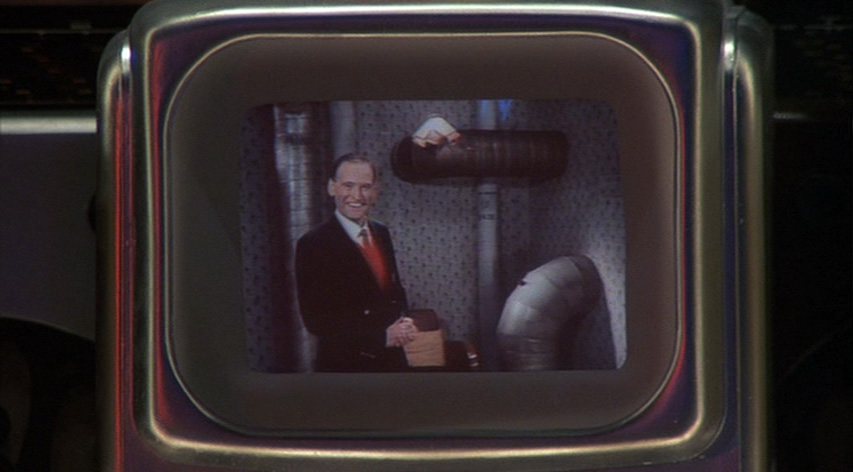 Now here’s the Central Services spokesperson. He’s here to tell us about how we can replace our old, unsightly ducts with newer, more fashionable unsightly ducts. They just get in the way and clutter up your living space, don’t they? The ducts are just like the bloated, bureaucratic government: they exist only for their own benefit. The public is an afterthought. You’ll see just how little the bureaucracy cares about human beings when the innocent Mr. Buttle is wrongly arrested and accidentally killed during interrogation, and no one feels any remorse: they just don’t want to be stuck with the paperwork. 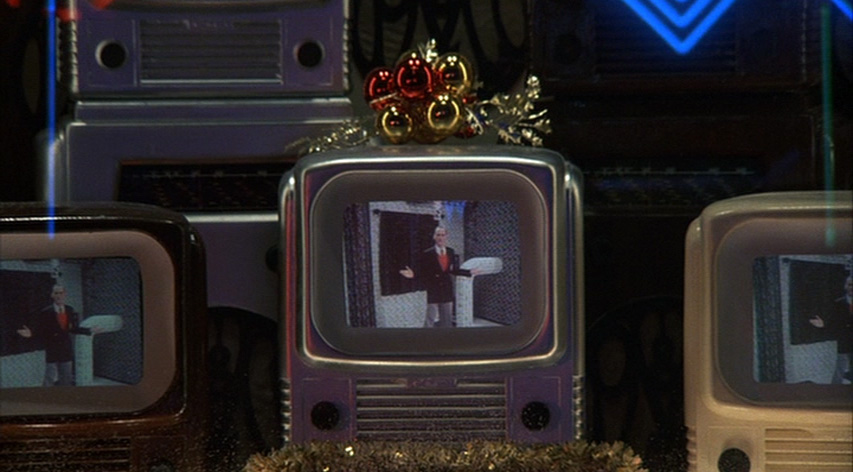 And as we pull back to view the display window at the TV shop, we can tell by the decorations that it’s Christmas time. It has gotten too commercial, hasn’t it? 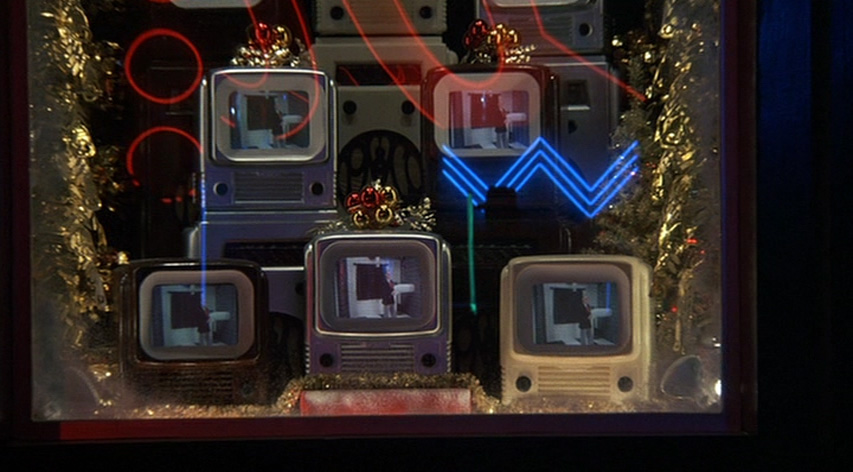 We pull out more. Look carefully at the reflection of the blue neon sign. A noir-ish shadow of a man with a hat can be seen. It’s such a classic image from 40s noir, and it sets up a sense of foreboding. We’ll see the man himself in a couple seconds. 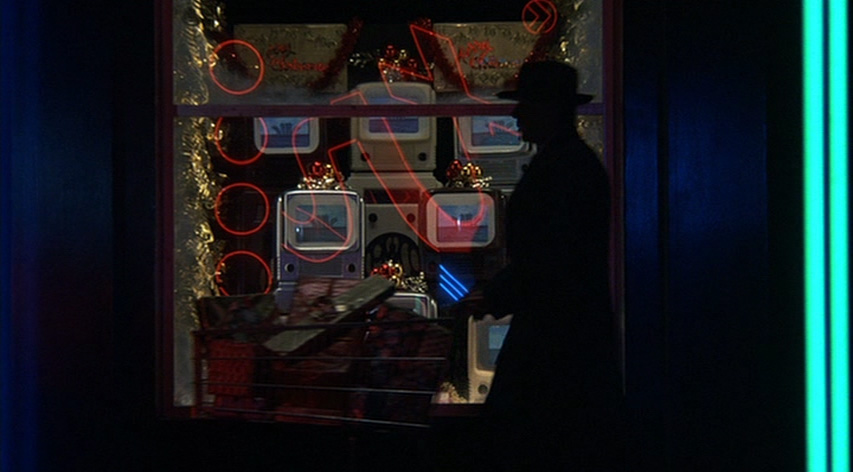 From the right, the man with the hat enters the frame pushing a shopping cart full of Christmas packages. I say packages instead of presents because they may not be presents at all. It could all be normal, but there are two possibilities for the man and the packages that would make them more than they appear to be. Later in the film, our hero, Sam Lowry, suspects a package of being a bomb. Could that be what these packages are? Perhaps. Or they could be the Christmas gift that everyone keeps giving but nobody wants: executive decision makers. Such pointless little desk toys! Christmas really has gotten too commercial! As for the man, he could be one of the terrorists we keep hearing about. Or one of those spies the government randomly sends out to watch people. Or maybe this whole paragraph is over-thinking things. 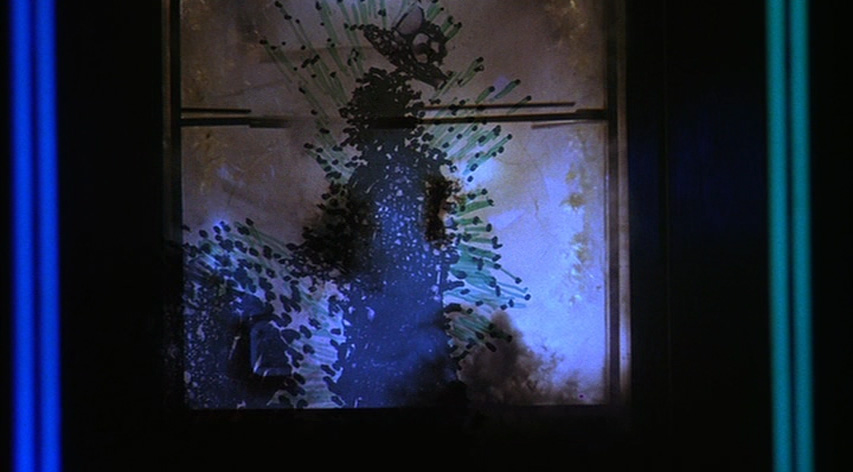 Then, with six animated frames, blink-and-you’ll-miss-it, the man completely disintegrates as an explosion erupts forth from inside the shop. 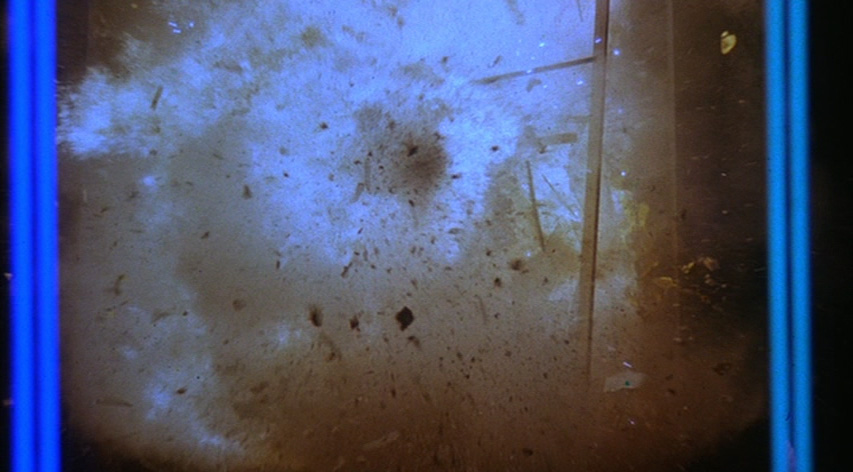 There are terrorists at work in this movie, and they’re fed up with scenes like what we just witnessed. Bureaucracy, dehumanization, unaccountability, commercialism, the whole thing.

It's a very different dystopian vision from "Blade Runner" or "Metropolis" (1927). "Blade Runner" found beauty within its dystopia. "Brazil" sees its own as universally ugly. Consider this: "Blade Runner" opens with images of tall towers issuing forth bursts of fire. "Brazil" has a similar image somewhere in the middle. In "Blade Runner," the towers are the crowns of mighty industrial plants. Magnificent, splendid. In "Brazil," they are ugly and pointless structures that spit fire for no good reason and likely just cause pollution.

JE: Thanks, Raymond. This is a classic introductory/establishing shot, with a bit of a surprise at the end. We can tell right away, by the design of the TVs and the Central Services announcer, that we're in some kind of retro-dystopian fantasy world....