Woody Allen's "Another Woman" (1988) begins with a shot that is the whole movie in miniature. As followers of the Opening Shots Project know, that's one of my favorite approaches, and I think "Another Woman" is one of Allen's best movies. 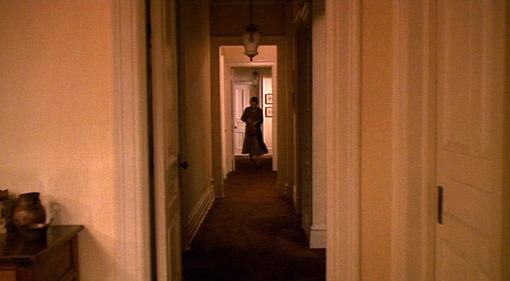 A woman (Marion Post, played by Gena Rowlands) appears at the far end of a dark hallway and strides toward the camera, passing in and out of light. She is wearing a long coat, and she puts a scarf around her shoulders as she walks. She's a woman who knows where she's going. We don't get a good look at her until she moves into medium close-up, adjusts an earring and comes face to face with herself in the mirror. (Bergman reference intentional.) Her reflection is obscured from our point of view, but for a moment we see her look directly into her own eyes. 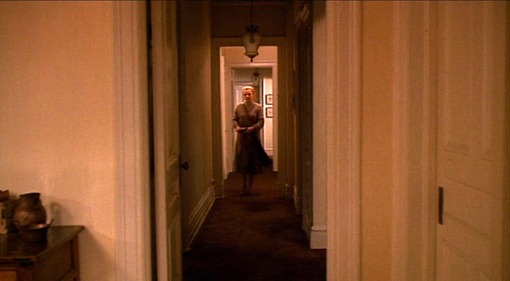 Marion, who has recently turned 50, thinks she knows herself and what kind of life she has led. But what she encounters when she steps out the door will overturn her establish notions of who she is and what she has done with her life: her memories of the past, her marriages, her lovers, her friendships, her relationships with her own family... Everything she though was solid and certain is swept out from under her feet and she goes into free-fall. With wit and insight, the movie details her unexpected investigation into what she's made of herself. And as the illusions crumble around her, she notices her mother's tear stains on the last line of a favorite poem, Rainer Maria Rilke's "Archaic Torso of Apollo," which reads: "... for here there is no place that does not see you. You must change your life." 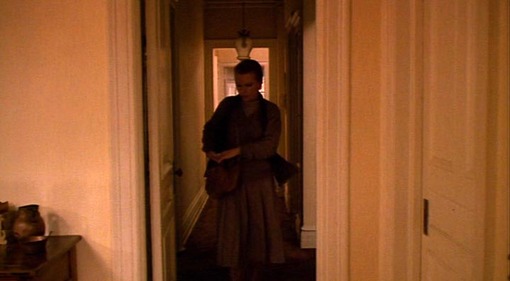 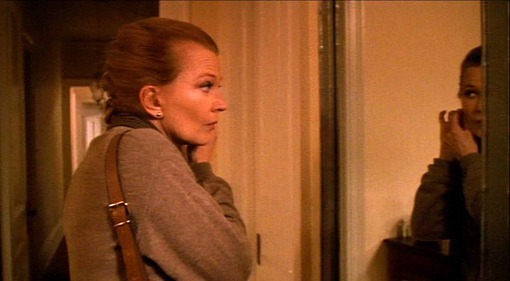 The opening shot is accompanied by Marion's voiceover, placing us inside her head from the start: "If someone had asked me when I reached my fifties to assess my life, I would have said that I had achieved a decent measure of fulfillment both personally and professionally. Beyond that, I would say, I don't choose to delve. Not that I was afraid of uncovering some dark side of my character. [Cut to straight-on close-up -- more or less from the mirror's point of view.] But I always feel that if something seems to be working, leave it alone." The movie is the journey from there to the final image in which, adjusting to a new understanding of herself, she is no longer in motion, but seen in a moment of reflection with just the hint of a wistful smile on her lips: "... and I wondered if a memory is something you have or something you've lost."

(The film's language is quite stylized -- deliberately stilted, but also playful in the ways it reveals the characters while subtly undermining their seriousness. It's almost like a psychology department academese via Mamet.)

Allen is known for building time into his production schedules for extensive re-shoots. (The film before this one, 1987's "September" was entirely re-shot and partially re-cast after Allen didn't like.) Because his films are so modestly budgeted, he can usually afford to work this way. The opening of "Another Woman" is so note-perfect, however, that I was surprised to learn that the writer-director couldn't decide how to start it. According to an article at the Turner Classic Movies web site, which quotes interviews with producer Robert Greenhut and production manager Joe Hartwich in Julian Fox's book, "Woody: Movies From Manhattan":

Allen also changed his mind several times about the film's opening. At one point he wanted a tracking shot to follow Marion walking down the street carrying groceries for her new apartment. After crews spent two hours setting up track for the camera shot, Allen changed his mind. Instead of the outdoor shot, the film opens with Marion in her apartment.

Well, he found the right solution. "Another Woman" begins as it has to. The image feels... inevitable. 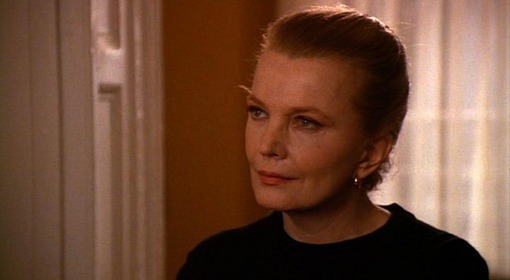