On ballooning and weenie-wagging in these troubled economic times... 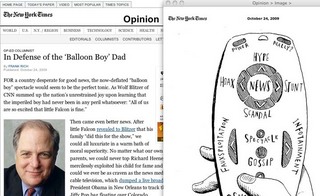 Is there supposed to be a connection here?

There's also some poignancy in his determination to grab what he and many others see as among the last accessible scraps of the American dream. As a freelance construction worker and handyman, he couldn't find much employment in an economy where construction is frozen and homeowners are more worried about losing their homes than fixing them. Once his appetite had been whetted by two histrionic appearances on "Wife Swap," an ABC reality program, it's easy to see why Heene would turn his life and that of his family into a nonstop audition for more turns in the big tent of the reality media circus.

Ladies and gentlemen, it's rough out there. I don't need to tell you that. A lot of folks have seen their savings go up in smoke the last couple years, and with unemployment soaring to almost 10 percent, it just makes sense to be a little bit wary and play things safe. It almost goes without saying that, in today's uncertain fiscal climate, it would be downright foolish to strip naked and run onto the field where your son's youth soccer team is playing.

You don't have to be an economist to figure that out.

Sure, the stock market is showing signs of life, and Obama's hinting that the worst may be over. But me, personally, I wouldn't go around wagging my half-erect penis before a group of horrified 11-year-olds just yet. Anyone who really understands the market will tell you that the key to this whole thing is caution. Even if the recession has run its course, as Ben Bernanke has projected it has, that doesn't mean it's safe to start disrupting your son's soccer game with the sudden, shocking appearance of your pale genitals.