Oh no! The secret is out! 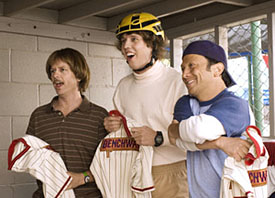 A trio of guys try and make up for missed opportunities in childhood by forming a three-player baseball team.

A serious breach of security has ripped through the movie industry. Somehow, some way, a critic in Florida (of course) got in to see "Benchwarmers" -- and leaked it to the press! Well, OK, so maybe that shouldn't be considered much of an intelligence leak (more like a diaper leak), but it happened to Roger Moore of the Orlando Sentinel, and he's going public about it. On his blog, Frankly, My Dear..., Moore says he got an invitation to a screening Monday night at a local theater, where seats were saved for the press. It seems the regional Sony publicist had forgotten to inform him that the press had been uninvited. (He should have read Scanners last week!)

His review, which he describes as "not the nastiest ever, but close enough," was posted on the Knight Ridder Tribune syndication service, where he says "it's the only one" (so lots of papers will be running it on Friday). And that's when, according to Moore, Sony started coming after him like the Bush administration after Joseph Wilson (or Richard Clarke or Cindy Sheehan or John Kerry or John McCain or...):

And next thing you know, Sony people, from marketing, advertising and the like (apparently not communicating with one another) are calling us, and newspapers planning on running the review. Calls to Dallas, Kansas City, Toledo, and on down the line.

And with the calls from Sony, come the lies. The review is "bogus," they tell one editor. "Unauthorized." That I "disguised" myself to get in (a roped-off row for "press" is not exactly incognito) to another. That KRT subscribing papers have to "pay" extra to run the review.

I had an invitation. "You and a guest are cordially invited..." Regional studio rep. forgets to uninvite me, if the studio ever told her to do so. Local rep knows nothing of such shenanigans. And I've since been told that the Jacksonville paper also got to see it. Sony, there's a hint as to where your problem is. Two Florida papers were somehow invited to two separate screenings. Get the connection?

I saw the movie, with an audience. No disguise, no nothing. And nobody has to pay extra for a wire service they already get.

As for the movie itself, Moore says:

It's a dog. Nine-12 laughs, maybe. Some involving booger-eating. Not my fault. From the review...

"Welcome to Adam Sandler World, where groins are for kicking, gas is for passing, jokes are for choking and jocks are for sniffing.

"It's a happy, stupid planet where director Dennis Dugan ("Problem Child," "Big Daddy") enjoys the status of a Hitchcock, and Sandler himself no longer needs to make an appearance. He can hire proxy Sandlers such aslike David Spade (career.. .. . OVER) and Jon Heder, who proves that his booger-and-bug-eating skills were ignored in "Napoleon Dynamite."

Moore reminds us that Sony got caught making up quotes for another Rob Schneider movie (2001's "The Animal") and suggests that maybe the company just isn't "real good at this manufacturing good 'buzz.' And silencing bad buzz."

Why should you care? Well, please don't. Not a lot, anyway. Not like a White House that denies access to the press to control news about a trumped up war and cover up its own misdeeds and missteps. But still, if Hollywood is spending millions on it, and they're proud of their product, what're they afraid of? The answer is, they're not proud. They know it's garbage. And they expect to sucker enough people in opening weekend to be able to afford the next junk-picture they whip up. Don't let them.

Meanwhile, KRT stands by their man, according to a piece in the Kansas City Star that has a few more choice tidbits about the fiasco:

Roger Moore, who for the last six years has been the movie reviewer for the Orlando Sentinel, gave the film one star out of four.

Then things got really interesting. Tuesday evening The Star received a call from Christine Gutierrez of Universal McCann, Sony’s advertising and public relations agency. Gutierrez said Wednesday that she was asked by Sony to call newspapers subscribing to the Knight Ridder Tribune wire services and advise them that Moore’s review was “unauthorized."...

[Moore said:] “Obviously Sony’s local field representative made a mistake. She wasn’t supposed to let critics see the film and she did. It’s probably going to cost her her job.

“The crazy thing is that this is a critic-proof movie that’s going to do business no matter what I or anybody else writes about it. I don’t understand why Sony has its panties in such a bunch."

In a statement, the newspaper’s editors said: “The Orlando Sentinel is attempting to clear up the misunderstanding, but in the meantime, we want you to know that Knight Ridder Tribune stands by Roger Moore’s work. This is a legitimate review by a nationally respected film critic."

The funny thing is: Would an instantly disposable and forgettable thing like "Benchwarmers," which the studios churn out like the Charmin factory spews tp, ever have gotten this much publicity if it weren't for the cancelled critics' screenings? Maybe the Sony publicists aren't so bad at their jobs after all...