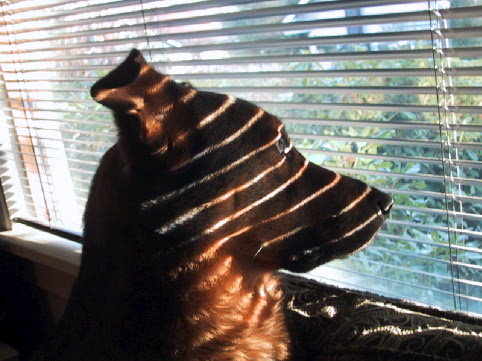 I'm back from break but hopelessly preoccupied because my eldest dog Frances had a couple lumps on her back foot and I had to take her in early this morning for a surgery/biopsy. This talk of "spindle cells" worries me tremendously, but Frances herself has shown no signs of feeling ill. Because I'm a terrible fretter, this has left a big cloud over the end of my year, and made me even more reluctant than usual to keep in touch with the people I care about. Because, basically, I get paralyzed with worry and just want to get into the fetal position until the uncertainty and apprehension is over. I know it's idiotic. I went through the same thing worrying about Roger Ebert's recovery last summer, and am so happy that he's come through and working his way back (even doing occasional reviews when he can).

Best News of the Year So Far: I was thrilled to see the byline of Matt Zoller Seitz in the New York Times this morning as I was blearily trying to wake up before taking Frances to the vet. (It's DARK at 6 a.m. in January in Seattle. Who knew?) Matt is the founder and editor of one of my favorite movie/TV blogs, The House Next Door. I do not miss the Links for the Day. And Matt himself is a terrific writer. His review of "Children of Men" is the best thing I've read about that film, conveying the excitement of watching it as well as the disappointment that it had nowhere to go. (Some thought the ending was brave and open-ended. To me it felt like a mushy sentimental cop-out -- although there was that flashing red buoy light, perhaps [I hope] to remind us, as in the ending of Nicholas Ray's "Bigger Than Life," that this superficial resolution isn't necessarily what it seems to be. I know, I know: How can this ending be considered overly tidy, pat or a form of commercial condescension when so much of the fate of Humankind itself is left at sea? Well, the movie is about particular characters, not the apocalyptic sci-fi world they live in; it's a matter of foreground vs. background...)

The Double-Best of the Year