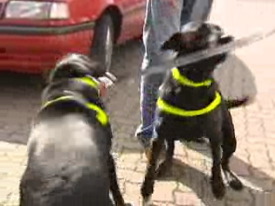 Lucky and Flo, the DVD-sniffing labs.

As part of a project promoted by the Motion Picture Association of America, Inc. (MPAA), FACT instigated the training of two black Labradors named Lucky and Flo by one of the world’s leading experts in the field whose other clients include police, fire and rescue service. The dogs were trained over an eight month period to identify DVDs that may be located in boxes, envelopes or other packaging, as well as discs concealed amongst other goods which could be sold illegally in the UK. These DVDs are often smuggled by criminal networks involved in large scale piracy operations from around the world. 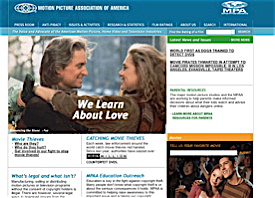 MPAA Says: We learn about love from the movies -- "Romancing the Stone," in particular, a film known for its realistic depiction of romance and sex.

For their first major live test, Lucky and Flo were put to work at FedEx’s UK hub at Stansted Airport and were immediately successful in identifying packages and parcels containing DVDs for destinations in the UK.

“This is the first time dogs have been used anywhere in the world to search for counterfeit DVDs and the results were amazing, said Raymond Leinster Director General of FACT....

“FedEx was glad to assist in Lucky and Flo’s first live test in a working situation. They were amazingly successful at identifying packages containing DVDs, which were opened and checked by HM Customs’ representatives. While all were legitimate shipments on the day, our message to anyone thinking about shipping counterfeit DVDs through the FedEx network is simple: you’re going to get caught. FedEx employs state-of-the art security, and now Lucky and Flo are on the case," said UK Managing Director, Trevor Hoyle.

HM Revenue & Customs Detection Manager Ian Chadwick said, "As an organization, we are delighted to work with FACT and FedEx to help stop the trade in counterfeit DVDs. These dogs are one of a number of powerful tools in detecting organized crime. I don't think that members of the public realize that each time they buy a counterfeit DVD they are supporting criminal activity."

... and it goes on from there. I would like to pose a question to HM Revenue & Customs Detection Manager Ian Chadwick: Why do you think members of the public do not realize they are supporting criminal activity "each time they buy a counterfeit DVD"? It would seem that the FBI and Interpol warnings on all legit DVDs had made that quite clear. Plus, there's something about the word "counterfeit" that suggests (to me, anyway) a certain air of illegality. So, if somebody is buying a cheap DVD of a movie -- particularly of a title that has just been released in local theaters, or perhaps even before that -- isn't that a pretty good indication that it's an illegal copy?

And then, once they see it and notice the lousy sound and visual quality, especially if it's one of those shaky camcorder specials taken from within a theater auditorium, isn't that another pretty good clue that someone or something has been duped? In this age of digital cable, satellite and broadcast TV and big-screen HDTV screens, where high-quality, full-featured legit DVDs regularly sell for around $15-$20, who thinks it's worthwhile to buy a bad fake?

Nevertheless: Brava, Lucky and Flo. According to the MPAA web site, authorities have seized (love that word) more than 76 million counterfeit DVDs since last year. Which means Lucky and Flo should have lots of stuff to sniff.

Counterfeiters: You are on notice. Better switch to UPS. Or DHL. Or, wait -- the Internet!