Making movies in your head 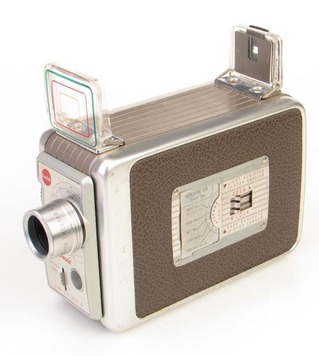 I started making movies before I was a teenager. Making movies on actual film, that is. I was always making movies in my head, but it wasn't until my dad lent me his 8mm Kodak Brownie wind-up movie camera and a light meter that I and some friends started actually putting things on celluloid. Our early efforts had titles like "Gores Galore" [sic], "Land of the Giants," "The Murderer" and "Potpourri" (a title we took from "Laugh-In" for a hodge-podge of stunts and gags we just made up as we shot them). For special visual effects we used a lot of extreme camera angles (low and high), miniatures (Matchbox cars, army men), smoke bombs, fireworks, dummies stuffed with newspapers, red food coloring, Vampire Blood™, and cooked spaghetti for innards.

If I remember correctly, the total running time of one exposed reel was about three to five minutes. You bought the film in double-width form and loaded it into the camera, then had to go into a dark room (or deep shade) and flip the reel to re-load halfway through shooting. The lab would cut it down the middle when you mailed it in for developing and send it back to you as an 8mm reel with one glue-splice that strung it all together. (This was not the new Super 8, which was too fancy and expensive, even though it was only one millimeter wider.) They were all silent, of course, though we made syncrhonized 3-inch-reel tape recorder "soundtracks" with music and narration by simply running the film, playing records, and speaking into a microphone.

Though I have made movies in one form or another ever since (on film, video -- and always in the way I look at the world around me), those formative experiences with the camera you see on this page shaped my way of looking at cinema. Because, you see, whether the movies were live-action or single-frame animation (tapping that little corrugated button on the front), all the editing was done in my head. Tape splices were nasty things. So, without a shot list or a storyboard, I would imagine the movie in my head, one shot at a time, and try to shoot it that way.

Consequently, I didn't like to return too often to a camera position I'd already used. I'd get what I needed in one shot and then try to find another way of approaching the scene. I loved long takes even then, though the suspense of trying to get the shot right on the first take was excruciating -- and you had to be sure you remembered to wind the camera all the way up if you were going to risk a shot that lasted more than about ten seconds.

I was probably about 13 or 14 when I made my animated movie "Still Life," which featured vignettes that included a hungry white gooseneck desk lamp that ate balls off a pool table. (Oh yes, this was way before Pixar.) There was also a bit where the Mona Lisa grew a mustache and was revealed to be bra-less. Ah, the early '70s...

Anyway, you should try this sometime, just for fun, if you haven't already: Make a short film or video entirely in-camera. No post-production editing allowed. You'll have to keep the grammar and timing in your head. You'll be amazed at how much you internalize -- and, possibly, by what you forget if you don't have notes or storyboards to remind you.

Kids seem to understand film grammar from a very early age -- even though it's only been around for about a hundred years. I wonder how old they need to be before they can start putting together their own movies...