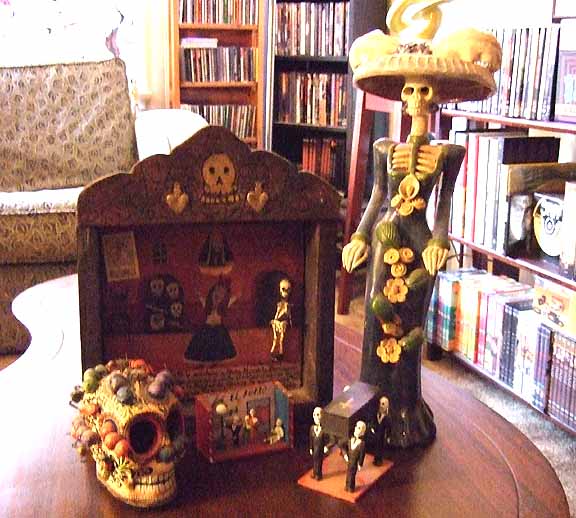 Just a few pieces from my Days of the Dead art collection that make me very happy. That's Catrina on the right. Meanwhile, in the rear center, the Virgin of Soledad is calming the "orrendas visiones" of Doña Micaelita Dominguez on Nov. 2, 1897.

"The Mexican people, after more than two centuries of experiments, have faith only in the Virgin of Guadalupe and the National Lottery." -- Mexican Nobel laureate Octavio Paz, 1976

I'm sure Paz intended that statement as a tribute to the defiant spirit of the people of Mexico.

Seven years ago, my dear friend Julia Sweeney and I were in Oaxaca, Mexico, for the Days of the Dead (Los Dias de Los Muertos), October 31-November 2, the holiday that has had the most personal meaning for me ever since I found out about it. Discovering that there was a three-day holiday -- the biggest and most festive of the year, surpassing Christmas even in a now mostly Catholic nation -- in which people build altars to remember and celebrate their dead, decorate graves with marigolds and stay up all night drinking and partying in cemeteries, where kids eat sugar skulls and "demons" are invited to join families in dancing and feasting... what a revelation! 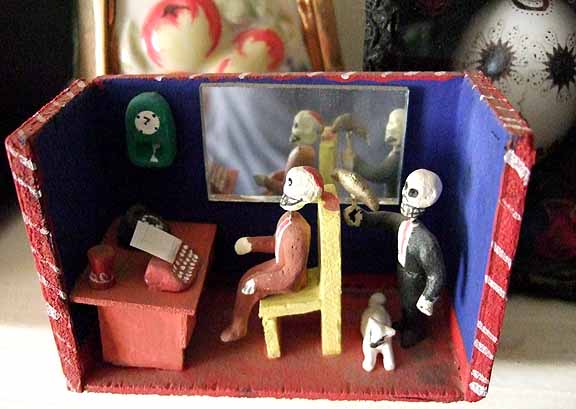 Señor Deadline sneaks up behind me and fractures my bleeding skull with a golden hammer while I'm seated at my desk.

For somebody who was raised in a culture where death was rarely acknowledged with anything but whispers in hospitals or screams in movie theaters, the Mexican embrace of death with a three-day fiesta seemed to me to move beyond denial to something much richer and healthier. No, I don't believe the souls of the departed dwell in the Land of the Dead and return to visit their loved ones for three days a year -- but I sure think it's a fantastic idea.

I think Julia was still more or less Catholic (her background) when we were in Mexico -- although I'll never forget her exclaiming, in reference to how the Mixtecs skillfully adapted their pagan gods and beliefs to accommodate, and escape the wrath of, the Spanish missionaries: "Wow, they just took Roman Catholicism and ran with it!" (Viva la Virgin of Guadalupe!) 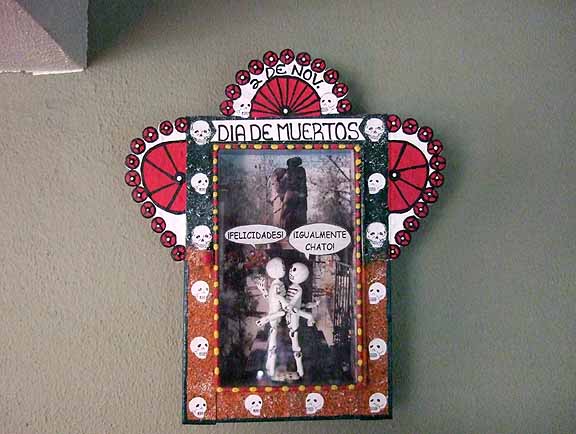 Fifteen months (and one cardiomyopic heart-stoppage on my part) later, we would be in Guangzhou, China, where I accompanied Julia as she adopted her daughter Mulan. While we were in the People's Republic, we learned that Mulan's birthday had been November 2, 1999 -- All Souls' Day, the very time we had been on the other side of the world, in Oaxaca, celebrating the Days of the Dead. (Cue Theramin music here.) Neither of us, I think, is inclined to attribute such a delightful and miraculous synchronicity to any Divine Influence or Plan -- indeed, we revel in the wonder of such an occurrence all the more because it is so spectacularly fortuitous. (Hi Mu: I'm so glad I was with your mom when you were adopted in China!)

I was introduced to the Days of the Dead through a little import shop on "The Ave" in Seattle's University District, La Tienda Imports, where as a Junior in high school I discovered a wonderful white coffin with my name on it ("Jaime"). You pull the string at the foot of the coffin and Jaime's skeletal head pops up through the hole on top of the coffin. This little handcrafted item has been with me for more than 30 years now. In 1976 I saw the extant footage of Sergei Eisenstein's "Que Viva Mexico" at the Second Seattle International Film Festival at the Moore-Egyptian Theatre, and fell in love with the holiday.

A year or two later I would try a mind-altering substance for the first time (courtesy of "The Dude," later immortalized in "The Big Lebowski") deep in the bowels of this same theater on the opening night of that edition of the festival, and then get lost trying to work my way through the "catacombs" to the surface for the midnight premiere of George Romero's "Dawn of the Dead," still the goriest, funniest, and my favorite of all "undead" movies (I was a little too young for "Night of the Living Dead" when it was first released). John Huston's underappreciated-masterpiece adaptation of Malcolm Lowry's "Under the Volcano" also begins with Days of the Dead imagery, in Cuernavaca (and the credits sequence is one of the most eerie and delightful I've ever seen).

So, I've been reflecting on what it is, exactly that scares us so much about the "undead" (in the sense of Romero's "Living Dead" and other zombie-spawn)? Well, first of all, they're ugly, smelly, and have a ravenous appetite for human flesh, of course. But a dead body is a dead body -- an inert object (see poem by William Carlos Williams at the end of this post). The terrifying thing about the living dead is that they're dead but they won't stay that way. It's not their death that horrifies us, it's their life -- their refusal to play by the rules of the natural world. The living dead are very much like the "pod people" of "Invasion of the Body Snatchers," only they have a harder time "passing." (They still go to the mall, though, in "Dawn of the Dead" -- because it was "once an important place in their lives.")

I hope you've been following the new Showtime series, "Dexter," about a serial killer whose dad was a cop and who now works as a blood-spatter specialist for the Miami police department. Dexter is one of the living dead, emotionally speaking. He's a hollow man. As he says of his sister: "If I had feelings, I'd have them for her." There's something terrifying about that. Dexter, like most sociopaths, is quite good at faking ordinary human interactions (and to some extent we all go through the motions, "acting" emotions we don't really have because, well, it's just easier to survive that way). But Dexter's mask of ordinariness is what makes him so frightening, the knowledge that there's a killer lurking under the skin. And that goes to the heart of the horror of the living dead: They look like us (or once did), but now they are mindless predators. Our greatest fear is not even that they'll catch us and eat us, but that we will become like them and develop a taste for human blood.

Just a few random thoughts about life, death, undeath and the movies on All Hallow's Eve. Now, here's another of my favorite William Carlos Williams poems. It's a favorite because it captures the moment when death seems to make a mockery of life and love, and captures the impulse (all too prevalent in our culture) to simply turn away. (In the Kubler-Ross progression, I guess this would fall somewhere between stages 1 and 2: Denial and Anger). I also love it because it brings home the emptiness and absurdity of death, with its language about potatoes and acrobats; and yet mocks the notion of viewing a natural process as empty and absurd. (Which is more empty and absurd: Death itself, or the human inability to see it for what it is?) But the anguish here is hard and genuine, because it's about betrayal, the inability of love to fulfill our illusions and to conquer or transcend death. OK, enough of my literary autopsy. Although this poem is far from festive... Happy Days of the Dead!

he's dead the old bastard - he's a bastard because

he's a godforsaken curio without any breath in it

he's nothing at all he's dead shrunken up to skin

Love's beaten. He beat it. That's why he's insufferable -

Dead his eyes rolled up out of the light - a mockery

just bury it and hide its face for shame.