Listening to language: Our dumb media

First off, I agree with Angus T. Jones -- well, about one thing, at least. The child actor of whose existence I hadn't been aware until a few days ago said on digital video that he was employed on a lousy sitcom that was basically "filth." Who's going to argue? Really, is he wrong? Have you ever seen Two and a Half Men? (I admit I've only witnessed bits and pieces, but that was enough to get the tenor of the show. And I knew there was a "half" involved -- the title tells me so -- but I didn't know Jones was it.) So, the young man says this:

I don't know what "research" he's referring to specifically, but if exposure to Two and a Half Men lowers your standards for "entertainment," then perhaps that's all the evidence of brain damage we need.

But why is anybody surprised that someone should say this? Theoretically because: 1) this guy on the show, and most actors (and above-the-line staff, like writers and directors) aren't supposed to complain that the show they're working on is terrible, because they're earning a lot of money for producing this crap ($350,000 per episode for Jones); if he were underpaid, it might be a different story -- but he could probably get out if his contract and quit if he really wanted to, like Chevy Chase on Community; 2) it's extremely ungracious to the people he works with, many of whom may be in the same position he is; and 3) he's involved with some purportedly Seventh-Day Adventist sect/cult called the Forerunner Chronicles, for/with whom he made the video in which he said what he said about "Two and a Half Men."

But c'mon, all he said was the obvious, that it's a raunchy, lowball sitcom (like so many network and cable shows, past and present). The clips I've linked to in the text here speak for themselves. Isn't the "filth" the point of the show, the reason it exists and why people watch it? I doubt it's for the rich characterizations, moving stories or thought-provoking themes. Or the brilliant comedy writing. (Subjects are pretty much limited to: poop, farts, urine, breasts, butts, penises, vaginas, sex, booze, drugs.)

So, this is another example of the media making a big false "controversy" about somebody saying something that's been patently obvious to everyone for years. But at least Jones' remarks weren't misrepresented in headlines and he was quoted accurately. We've seen how often that's not the case in recent months. Like, for example, when the Fox/GOP™ took President Obama's "You didn't build that" statement wildly out of context and twisted its meaning into something it clearly wasn't. (But then, Al Gore didn't say he invented the Internet and Bogart didn't say, "Play it again, Sam," either. Those memes have entered popular culture, but it's easy to show beyond all doubt that they're misquotations.) What Obama actually said, in part of a speech about what government contributes to our way of life, was:

"If you were successful, somebody along the line gave you some help. There was a great teacher somewhere in your life. Somebody helped to create this unbelievable American system that we have that allowed you to thrive. Somebody invested in roads and bridges. If you've got a business -- you didn't build that. Somebody else made that happen. The Internet didn't get invented on its own. Government research created the Internet so that all the companies could make money off the internet. The point is, is that when we succeed, we succeed because of our individual initiative, but also because we do things together. There are some things, just like fighting fires, we don't do on our own."

Attempts to distort this one were laughably indefensible -- limited to repeating, "If you've got a business -- you didn't build that." Likewise, some SuperPAC-funded pro-Obama ads misrepresented Mitt Romney's statement, "I'm not concerned about the very poor." In context, what he said was:

So, he was proclaiming that he was focusing his efforts on neither the very rich nor the very poor, but on the majority of Americans in-between. You might question whether his proposals actually reflected that concern, but you can't deny what he, in fact, said. (He may have been sneaky enough to repeatedly misrepresent his own positions on national television, and to say unguarded things to an audience of private donors about " the 47 percent" -- a statement that was, itself, untrue -- but he wasn't so stupid that he'd simply announce "I don't care about poor people" in public during a presidential campaign.)

And then, last week, I saw variations of this headline all over the Internet: "Alan Simpson: I hope Grover Norquist drowns in the bathtub." Out of the blue, it seems like a wacky thing to say. Salon's kicker was, "In a surreal 'Hardball' interview, the former senator makes the wildest threat yet against the anti-tax zealot." But there was nothing "wild" or "surreal" about it. It was obviously a joke, playing off of Norquist's own infamous 2004 comment, "I'm not in favor of abolishing the government. I just want to shrink it down to the size where we can drown it in the bathtub." So, Simpson pays attention to language and metaphor and idiot reporters don't get that he wasn't really advocating murder? Even Chris Matthews laughed when Simpson said it:

Simpson: "So how do you deal with guys who came to stop government, or Grover [Norquist] wandering the earth in his white robe saying he wants to drown government in the bathtub? I hope he slips in there with it. We'll put some soap in the tub."

Matthews: I'm with you on the full metaphor."

I can even (kind of) understand where Indiana state treasurer Richard Mourdock was coming from when he said that a pregnancy -- no matter what the circumstances -- is a "gift from God." I think he's dead wrong, and he expressed himself badly, but I'm glad he stated what he believes so voters could make an informed decision about whether they wanted him representing them in the Senate. (They didn't. I'm glad he lost, but I don't think his defeat was "a gift from god," either.) What the guy said was:

"The only exception I have to have an abortion is in that case of the life of the mother. I just struggled with it myself for a long time, but I came to realize: Life is that gift from God that I think even if life begins in that horrible situation of rape, that it is something that God intended to happen."

And that's just what you'd expect someone who believes that life is god-given and thus begins at conception to believe. It was an insensitive thing to say and he deserved to be criticized (we make laws to protect human society, not to channel somebody's religious notion of "god's will"), but he did not say that rape (which he called a "horrible situation") was "god's will." He said he believed the creation of life was "god's will." And if you think a zygote or a blastocyst or a fetus has a "right to life," and that things happen as a result of "god's will," then there you are. (I'm always curious about those who think god oversees everything, and intervenes to perform "miracles," don't hold god responsible for everyday misery, atrocities and catastrophes. I also find it weird that those who claim they want less "government intrusion" into their lives are so often the same ones who want to curtail individual rights and liberties by legislating more government intrusion into our bodies, our homes, our relationships and private lives.)

"God creates life, and that was my point. God does not want rape, and by no means was I suggesting that He does. Rape is a horrible thing, and for anyone to twist my words otherwise is absurd and sick."

So, criticize the dude for what he actually said, not for something you know he never intended in the first place. Men -- especially old, white Republican men -- probably shouldn't even be allowed to talk about rape or abortion because they can't possibly know what they're talking about. But, no, I do not advocate the introduction of legislation to that effect, or to force my view of morality on others. (That's where the idea of "freedom of choice" comes in.)

Next, there's the case of Jamie Foxx at the Soul Train Awards saying that Barack Obama was "our lord and savior." But is that really what he said? Because even if he was calling Obama "our lord and savior," did anybody think he really meant that? (Go ahead and get mad at him for "blasphemy," for rhetorically equating a politician with Jesus, but the meaning of spoken language isn't limited to the words themselves.) Watch the abridged clip:

Maybe not, but given the source (a celebrity known primarily as a comic performer) and the context (a televised awards show, for which he was brought in to introduce other celebrities and pump up the crowd), I'm not inclined to take those words at face value. But I haven't seen anyone acknowledge that it's even possible to hear what he said as anything something other than what the looney "Obama is the/an antichrist" hatemongers are claiming -- that he sincerely meant that the recently re-elected President of the United States was also an honest-to-god messiah. 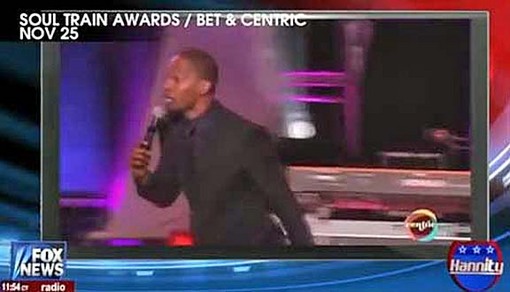 "I'm a comic. Sometimes I think people get a little too tight. And, it's getting a little tougher for us comedians. Some people take it and want to make a huge story out of it, but it's a joke."

(ET's transcription has an "and" inserted after "comic" and a "because" inserted after "comedians," again demonstrating how Foxx, like many people, tends to leave out transitional words and phrases when he talks.) So, what exactly was the joke? A comedian's parody of pompous award-show acceptance speeches that inevitably thank god and Jesus? A joke about Soul Train as church? A joke about the election results? A joke about the crazy expectations some people had for Obama? A joke about recent scandals over paintings portraying Obama as Jesus? A joke about right-wing psychopaths who call Obama the antichrist? I don't know. And I really don't care -- but I'm puzzled that anybody would try to make it into such a big deal.

Dumb stuff happens all the time. Sure, that was a funny typo in Romney's iPhone campaign app: "A BETTER AMERCIA." But that's all it was. A typo.