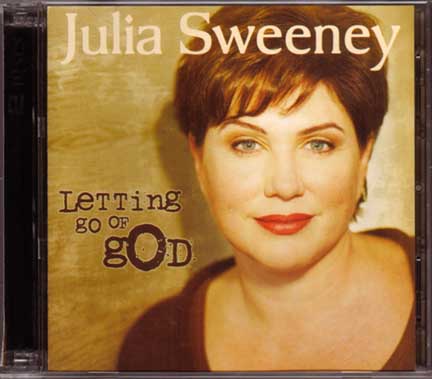 A personal note: I hope you've seen my dearest friend Julia Sweeney's "God Said 'Ha!'" (Roger Ebert's review here), which is available on DVD. And I hope you've seen her stage monologues, "In the Family Way," about her decision to adopt her daughter, Tara Mulan Sweeney, from China (my photo account of the journey itself is here, with my text written in Borat-esque Engrish); and, especially, "Letting Go of God," about her messy breakup with the Almighty, which she has performed in LA and New York (she's about to do nine shows through October 29 at the Ars Nova Theatre -- right next to "The Colbert Report"!) -- and abridged one-night engagements in a few other cities, including Seattle and Austin, where she did Q&As afterwards with Ira Glass.

You may have heard a small excerpt from "Letting Go of God" on Glass's "This American Life" NPR show, the most popular episode in that broadcast's history. But now -- for the first time! -- you can obtain a double-CD of the whole show (which comes with a beautiful booklet transcription of the piece) -- as well as a separate, single-CD recording of "In the Family Way." I'm so proud of, and moved by, Julia's accomplishments that I could do a dance -- which I indeed do, but in private.

Some of the happiest moments of my life have been working and playing and collaborating and consulting with Julia in various respects over the last 30 years of our enduring friendship -- on various projects for stage, print, TV and movies -- and I'm delighted to be listed as an Extra Special Creative Consultant on "Letting Go of God." The CDs go on sale at her web site October 25 (my birthday). "Letting Go of God," like "God Said 'Ha!'," will become a film of some kind (Julia is still playing around with ideas for how to shoot it). Here's an excerpt -- two of my favorite passages (although others are considerably funnier) -- that just happen to address this blog's core subject. No, not movies -- critical thinking:

God requires faith. Faith does not require evidence, right? But the more I thought about it, my faith was based on evidence. The evidence of how I felt when I prayed. The evidence of everyone believing in God, almost everyone I had ever met from the time I was a kid. The evidence of what I had been taught by other people I trusted, admired, and who ultimately had authority over me.

So, my faith in God was based on evidence. Well then, how could I not examine that evidence? But how did I examine anything? How did I know what I knew? I had to know! [...]

I thought of Pascal's Wager. Pascal argued that it's better to bet there is a God, because if you're wrong there's nothing to lose, but if there is, you win an eternity in heaven. But I can't force myself to believe, just in case it turns out to be true. The God I've been praying to knows what I think -- he doesn't just make sure I show up in church. How could I possibly pretend to believe? I might convince other people, but surely not God.

And plus, if I lead my life according to my own deeply held moral principles, what difference did it make if I believed in God? Why would God care if I "believed" in him?

It's a funny, informative, enlightening and suspenseful struggle if, like Julia (and me), you're inclined to Question Authority and figure things out for yourself. (Which is not to say you'll necessarily share Julia's conclusions -- and she doesn't expect you to -- just that you'll appreciate the switches, setbacks, false peaks and hard-won lessons of the journey...)