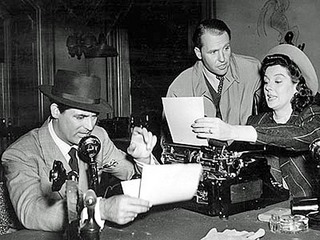 A great, cut-through-the-crap piece by NYU journalism associate professor Jay Rosen at PressThink asks why reality has been declared off-limits in American political journalism. Rosen zeroes in on one key line in David Barstow's fair and balanced New York Times piece on the Tea Party movement, "Tea Party Lights Fuse for Rebellion on Right": "It is a sprawling rebellion, but running through it is a narrative of impending tyranny."

If tyranny is impending, Rosen asks, why isn't that a story? Is it enough to report that somebody is making serious allegations? Or might it be the duty of the press to report whether any evidence can be found to substantiate those allegations?

It kept coming up, but David... did it make any sense? Was it grounded in observable fact, the very thing that investigative reporters specialize in? Did it square (at all) with what else Barstow knows, and what the New York Times has reported about the state of politics in 2009-10? Seriously: Why is this phrase, impending tyranny, just sitting there, as if Barstow had no way of knowing whether it was crazed and manipulated or verifiable and reasonable? If we credit the observation that a great many Americans drawn to the Tea Party live in fear that the United States is about to turn into a tyranny, with rigged elections, loss of civil liberties, no more free press, a police state... can we also credit the professional attitude that refuses to say whether this fear is reality-based? I don't see how we can. [...]

In a word, the Times editors and Barstow know this narrative is nuts, but something stops them from saying so-- despite the fact that they must have spent over $100,000 on this one story. And whatever that thing is, it's not the reluctance to voice an opinion in the news columns, but a reluctance to report a fact in the news columns, the fact that the "narrative of impending tyranny" is ungrounded in any observable reality, even though the sense of grievance within the Tea Party movement is truly felt and politically consequential.

My claim: We have come upon something interfering with political journalism's "sense of reality" as the philosopher Isaiah Berlin called it (see section 5.1) And I think I have a term for the confusing factor: a quest for innocence in reportage and dispute description. Innocence, meaning a determination not to be implicated, enlisted, or seen by the public as involved. That's what created the pattern I've called "regression to a phony mean." That's what motivated the rise of he said, she said reporting.

I urge you to read Rosen's entire piece. It goes to the essence of critical thinking in a world of tautologies, where opinions are assumed to justify themselves because, after all, they're free speech. But just because speech is free doesn't mean it can't be challenged with facts. Without reality-based reporting, nobody's accountable for what they do or say, and democracy itself doesn't work. See the tyranny in that?

Most of the men's gripes revolve around policies that began under President Bush but didn't scare them so much at the time. "Too many conservatives relied on Bush's character and didn't pay attention," founder Rhodes told me. "Only now, with Obama, do they worry and see what has been done. I trusted Bush to only go after the terrorists. But what do you think can happen down the road when they say, 'I think you are a threat to the nation?'"

In Pray's estimate, it might not be long (months, perhaps a year) before President Obama finds some pretext--a pandemic, a natural disaster, a terror attack--to impose martial law, ban interstate travel, and begin detaining citizens en masse. One of his fellow Oath Keepers, a former infantryman, advised me to prepare a "bug out" bag with 39 items including gas masks, ammo, and water purification tablets, so that I'd be ready to go "when the shit hits the fan."